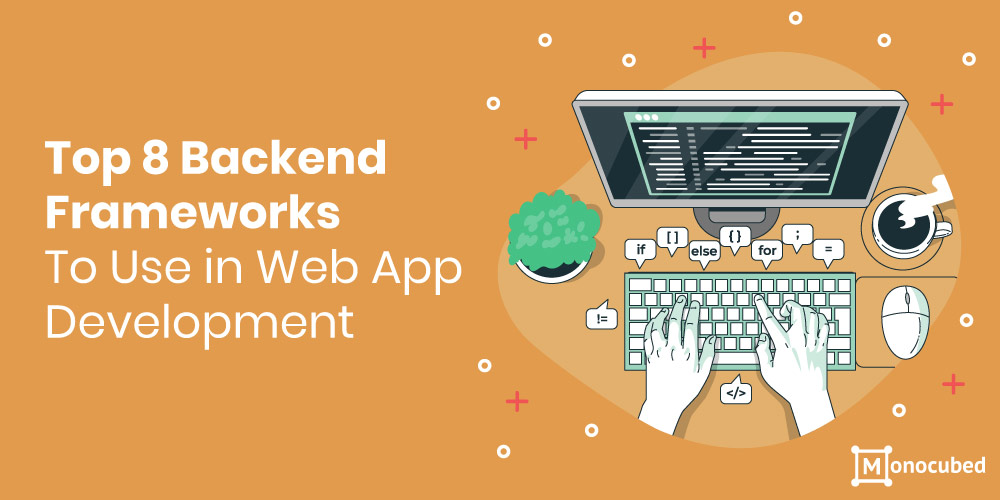 The advancement in technology has brought immense innovation in mobile and web applications. Companies aim to deliver valuable output to their customers by incorporating the most used frameworks, libraries, and tools.

Frameworks are considered a vital part of developing interactive web apps. While the frontend takes care of the user experience, the backend is what facilitates an application to function.

Backend frameworks are the libraries of server-side languages that aid in building the server configuration of any website. It is essential to use the right technology for developing websites or you can seriously affect your application usage.

VTo help you, we present the 8 top backend frameworks for efficient backend web development of websites.

In a hurry? Here are the top back end frameworks for different server-side programming languages –

The video showcases the evaluation of the most popular backend development frameworks and their growth over the years. We will discuss the features and use cases of these top 8 frameworks in this blog.

What is a Web Application Framework?

A web app framework is a software tool that is intended to facilitate and support web application development which includes web resources, services, and web APIs.

They offer a specific way to form and install web applications on the World Wide Web.

The frameworks aspire to mechanize the overhead linked with general activities performed in the development of the web. For instance, they supply libraries for templating, database access, and session management; also they frequently endorse code reuse.

Even though they are aimed at the development of vibrant websites, they are appropriate for some static websites too.

The best frameworks for web development generally place the control flow of the program and enable the users to ‘hook into’ that flow by divulging in diverse events.

Such an ‘inversion of control’ pattern is meant to be a crucial principle of a framework and benefits the coding by implementing a universal flow for the team to customize in similar conducts.

After knowing what is a web framework is, let us examine some critical features that aid experienced developers in web app development.

This is a collection of diverse software and methodologies reinforced to form and deploy web pages. The template engines are utilized to execute these web templates. They are termed as a tool for web publishing.

Modern web applications are sustained by robust web development tools. The most universal and one of the best frameworks for building applications facilitates the creation of all-purpose websites, forums, blogs, content management systems, to name a few.

This is an important system to understand and employ and is affiliated with MVC architecture. The essential parts of any application or the complete project configuration can be produced by the framework mechanically. This approach boosts the speed of the development cycle and regulates the codebase.

It aids to store various documents and evades the infuriating occurrence of server overload. The users can exercise it in different systems if a number of conditions are satisfied.

This security feature has ample criteria for recognizing and sanctioning or rejecting access to dissimilar functions. It also aids in identifying the profiles that utilize the applications to evade clickjacking. This makes the framework authorized and authentic.

Use the best frameworks and develop a highly secure, modern web app with our experienced developers.

What Are The Different Types of Web Frameworks?

The two primary functions of a website are on the server-side or client-side.

The architecture of a server-side web framework enables the creation of landings, simple pages, and forms of different kinds. They can render output data and enhance security at the time of web attacks.

Such a framework functions mainly on meticulous and significant details, without which the application cannot run work effectively. All these vital traits simplify the backend web development procedure.

With a client-side framework, you can easily enhance and execute a new user interface. It considers the work that takes place in the browser and has nothing to do with business logic.

Several animated characteristics can be fabricated with the frontend development frameworks and SPA (single-page applications).

Each client-side framework is different from the others in terms of its usage and functions.

After understanding the different types of frameworks in web development, it becomes crucial to gauge the difference between front-end and back-end.

Frontend developers have to work on the user interface of the site and must possess some skills utilizing design tools, namely, Sketch, Photoshop, or Figma.

The three prime tools the developers work with are CSS, HTML, and JavaScript. Their chief focus is to creating web pages with a rich user experience, ensuring the layout and design of the pages are consistent until their existence.

Angular, Ember, Vue are some of the most popular frontend development libraries and frameworks.

Backend developers must possess critical thinking skills to facilitate a designing scheme that makes the user interaction easy and responsive. They work with a wide range of libraries, APIs, web services, etc.

They are answerable for the execution of database systems, ensuring appropriate communication between different generating backend functionality and services. Ruby on Rails, Django and Express are some of the most popular backend frameworks.

Top 8 Backend Frameworks To Use For Web Application Development

Backend web frameworks are nothing but the libraries of modules and tools that aid to develop the structure of any site. If you require building a powerful web or app, wouldn’t it seem helpful if certain things are readily available?

The best web framework for backend development is the one that assists the developers to have a good start by eradicating the requirement to develop and configure everything from scratch.

Below are some of the most used back-end development frameworks written consisting of a variety of vital features.

What is a backend framework?

The backend frameworks are server-side frameworks that are exercised to make tasks hassle-free and convenient for developers. These web app frameworks are focused on scripting languages, namely, Node.js, JavaScript, Ruby, or compiled languages like Java or C#, Java. It also lays focus on business logic and security authorization and authentication.

Is Django for backend?

Django is one of the most preferred Python backend frameworks that formally facilitates four database backends, namely, Oracle, MySQL, PostgreSQL, and SQLite. Django is open-source and a compilation of Python libraries that allows the developers to create robust websites efficiently. It is a full-stack framework and can bee used throughout the entire development process.

Which backend framework is most popular?

Which is the best framework for developing REST APIs?

The best REST API framework is Express.js, and Django because it incorporates the Django REST framework(DRF). DRF simplifies development of REST APIs and lets you browse your API to see your program in action. But API development is quite flexible and not dependent on any language. We recommend the best API framework for you is the one you are already comfortable using.

There are numerous powerful backend web development frameworks available, each having its imperative traits and features. Selecting the best web frameworks relies on your project specifications and the expertise of a web developer in your team.

It is also important to consider that the tool you opt for is frequently updated to guarantee that it is capable of protecting against new and common attacks.

Still not sure which backend framework to use?

Contact Monocubed for a free consultation. Our team of experts can help you validate your idea and choose the best framework for backend development.