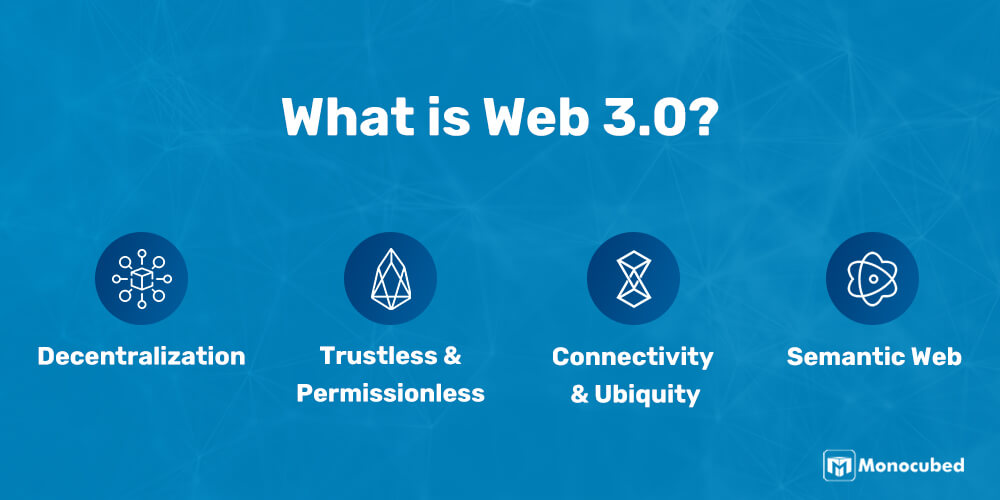 But what do these words mean?

What is web 3? When is it going to release? How does it affect everyone?

We are here to clear all this confusion in your head. In this blog, we discuss everything about Web 3.0 – its definition, its features, why we need it, and all the problems it will solve.

So let’s dive in!

To be clear, the world has not yet entered Web 3.0.

We are still using Web 2.0 and will continue to do so for some time. But with the advances in NFTs and cryptocurrencies, we are on the cusp of the new era of the internet.

Right now, all the data on the internet is owned by third-party organizations. For example, any posts you make on Twitter, are owned by the company. They can access it, edit it or delete it (as seen by deleting Trump’s tweets for racist content.)

The new and improved Web 3 aims to make the internet more open source. It will allow all the data – images, GIFs, reels, music – to be owned by the community. This will minimize hacking, data leaks, and censorship.

So let’s start by understanding what Web 3.0 actually is.

In the simplest terms, Web 3.0 is the third version or third iteration of the internet. It is a collection of ideologies and principles that makes the internet’s data accessible to users and creators. The core concepts driving the 3rd iteration of the web are decentralization, transparency, and user utility.

To understand web 3.0, let’s look at these defining features of Web 3.0 are –

Before we discuss each of these principles in detail and how the current internet version stands, let’s look at the history of the web.

The evolution of the internet has been exponential. During the early days of the internet connection, no one thought that it would be possible for people to visit places virtually or have a smart refrigerator.

The internet is widely divided into versions or phases –

But there are no exact dates we can point to and say, this is when we upgraded from Web 1.0 to Web 2.0 version. Why not? Because each Web version is a collection of ideas about how data is stored, how users interact with the internet and accessibility.

Have A Web App Idea in Mind?

Contact us to get a one-of-a-kind web solution for your business. We will help you validate your idea and provide a free personalized quote.

But there are problems with Web 2.0 as well. And this is why we need a new iteration of the internet.

Why We Need Web 3.0 – Internet Challenges to Overcome

In 2019, there was a Web 3.0 Summit – a conference of researchers and engineers to find out where the internet is going and what Web 3.0 will look like?

It was clear – Web 3 will be decentralized. Why? Because the internet is not working anymore. The way the internet is right now, there are numerous problems. In fact, the inventor of the web, Tim Berners-Lee himself talked about what’s going wrong with the web at its 30th anniversary.

The third problem is out of scope for this blog. But we will discuss the first two problems in detail and then talk about how the decentralized Web 3.0 will solve them.

All of these are only the major problems of the present internet. Therefore, it is very important that a new iteration of the Web is evolved which can solve these problems.

Let’s see how Web 3.0 is supposed to work and solve the mentioned problems.

The main feature of Web 3.0 as discussed is decentralization. With Web 3, we will have to see the following changes –

Apart from these, there are numerous advantages of Web 3.0. Semantic web envisioned in Web 3 will result in intelligent search engines, numerous smart devices in our house connected to the internet, and secure money transfers online through browsers. It is an exciting time as developers and engineers worldwide try to create new ways to advance the internet.

Here are answers to some common queries about Web 3.0.

There are already a lot of organizations and developers who are working on Web 3.0 or the semantic web. Although it will still take some years to bring Web 3.0 fully, there are some applications and browsers that are already implementing the decentralized protocols. Examples are Metamask, Brave, MyEtherWallet, and Coinbase.

Yes. Web 3.0 is the next step in the technological innovation of the web. It tries to solve many of the problems we are facing with the current version of the internet such as loss of privacy, targeted advertising, central control, and censorship. While Web 3.0 also has some of its own challenges, it is the right step ahead.

This guide on Web 3.0 has helped you understand the meaning behind all the buzzwords like NFTs and decentralized web.

Cryptocurrencies are just the first step in revolutionizing the web. With dApps and other new technologies, Web 3.0 will bring in a more fair and accessible internet to the users.

As a web development company, we are extremely excited by all the new changes happening in the web world. Subscribe to our newsletter to get regular updates on our technological blogs.