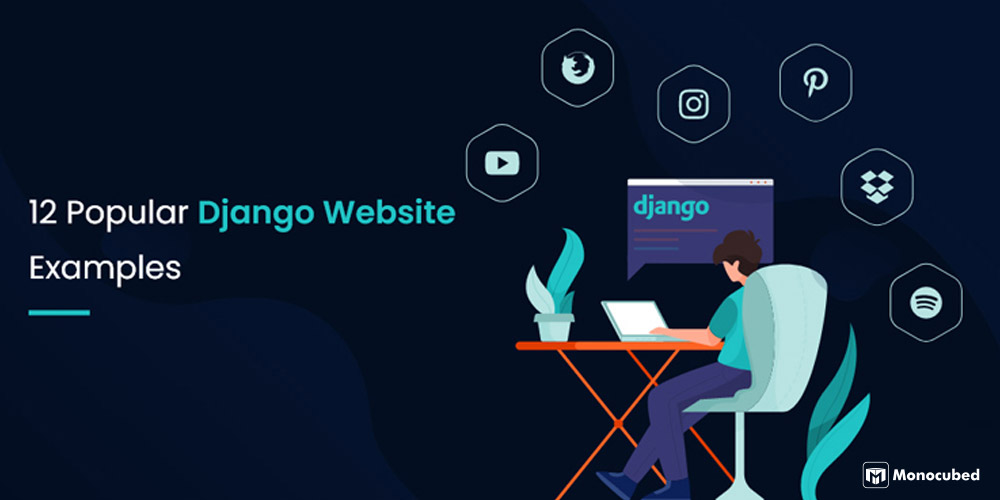 Python is one of the most beloved programming languages in the world today. Its popularity has been rising ever since it was released, and it is a top choice for many businesses worldwide. A great advantage of the Python programming language is the numerous frameworks and libraries available in the market.

Talking about one such Python framework, Django is the best framework for Python according to this JetBrains Developers survey 2021 and is used for creating high-performing web applications.

Want to build a Python website using Django?
Worried if Django is the right choice for you?
We have the answer right here for you!

We have curated a list of the top 12 Django website examples in this blog. As a Python web development company, we also use Django in a lot of our projects. We have taken inspiration from other companies who have showcased exceptional growth with Django.

Along with discussing some business giants, such as Netflix and National Geographic, that use Django in their websites, we will also look at the criteria for choosing Django in your project.

But first, let’s briefly look at Django and understand why so many businesses trust it with their websites and apps.

What is Django : A Glance

Although initially created to meet the needs of the Lawrence.com website, Django soon became popular due to its feature-rich functionalities. It supports rapid and clean development following a DRY (Don’t Repeat Yourself) approach.

Django provides reusable models, functions, classes, and code snippets to avoid writing code for regular tasks. Part of Django’s widespread usage is the ease and speed of development it offers. In a matter of days, you can build a fully functioning app; as with the available libraries, you don’t need to reinvent the wheel and focus on developing your website’s business logic.

Why Do Companies Use Django?

Django is a widely popular framework preferred by developers due to the multitude of features it offers. Offering a set of reusable components, Django applications are fast, scalable and flexible.

Leverage our expertise in Django development to develop a highly secure, modern web app for your business.

According to SimilarTech, currently there are more than 80 thousand active websites made with Django. A full-stack batteries-included framework, Django is used by companies of various sectors be it internet services or telecommunications industry, or entertainment and food businesses.

With so much focus on security and user privacy, the Python-based framework is a top choice for government applications and e-commerce and healthcare websites. Some popular websites and web apps that use the Django framework are –

These are some examples of popular websites built with Django that showcase its many features. Having such highly-acclaimed websites in its portfolio, Django is a top framework of choice for web developers.

We’ve got you covered. Develop a custom website that works perfectly across all devices- smartphones, tablets, PCs with our experienced team. Let’s talk.

But before deciding if your company should use it, look at some of the pros and cons of using Django on websites.

When Should You Use Django in Your Project?

Django is a multi-faceted framework that has varied usage. But as seen, it also has some cons that you should try to avoid. It is best to use Django when you will be benefited through its advantages and not hindered.

We recommend using Django when you are developing a project that ticks one or more of the below-mentioned points.

Django is one of the most widely used frameworks for website development. With high market value, Django is the preferred technology for businesses such as Instagram, Eventbrite, NASA, Mozilla, Google, and BitBucket.

Why is Django so popular?

Is Django better than Flask?

Both Django and Flask are Python-based web frameworks that are used for website development. While Flask is a simple, minimalistic micro-framework or Python, Django is a full-stack development framework. Each has its own set of use cases and should be preferred accordingly for businesses.

Django is a robust framework for web app development preferred by popular companies. The flexibility, security, scalability, and vast array of plugins and libraries it provides, makes it one of the most used frameworks today.

If you are building long-term solutions in the form of large, scalable applications, Django is the ideal choice for you. For expert guidance, you can contact Monocubed, where our team of developers will assist you in all your development needs.

For more information on Python and Django, you can read our collection of blogs on Python. Please subscribe to our newsletter, if you would like to receive daily blogs and updates on web development.