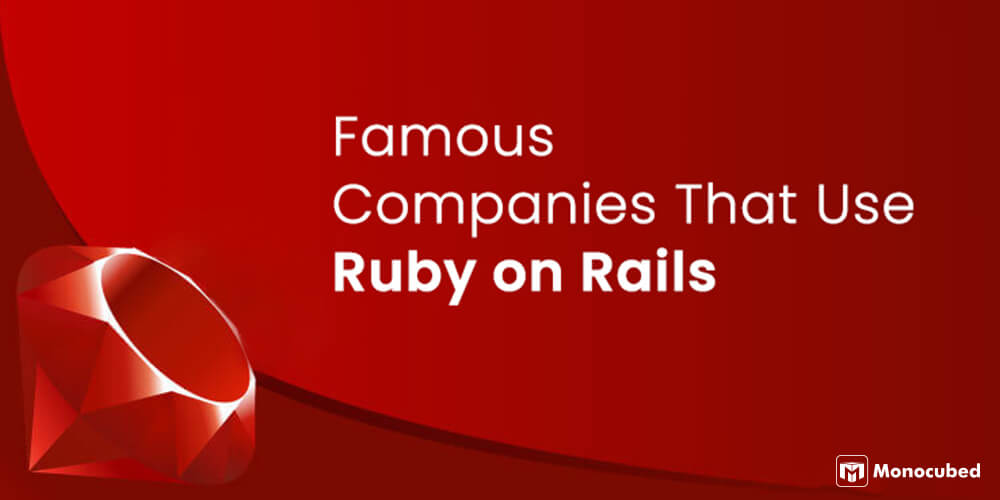 Ruby on Rails is an ingenious framework, which comprises all the elements essential to building a web app rapidly and efficiently.It facilitates an exceptional development ecosystem for structuring high-performing web applications.

For a dynamic, reliable, and scalable app, with dedicated developers and active community support, get Ruby on Rails.

There are several well-renowned companies using Ruby on Rails owing to its pioneering traits such as flawless migrations, database table formations, and scaffolding of views to facilitate quick development of web applications. Ruby on Rails development companies powers their web apps, beneficial for both, start-ups and reputable enterprises.

Rails is one of the most popular web frameworks based on Model View Controller prototype, the most extensively used web app structure.The continuous updates and the stable release of RoR 6.1.3.2, portrays that its future is brighter than ever as this technology platform persists to mature.

Let us see how this amazing framework conveys famous web applications and helps the organizations of these 6 industries scale up efficiently and swiftly.

Ruby on Rails delivers all kinds of integration to fulfill the requirements of any project.This can be achieved through an enormous library of gems available. It follows an agile development procedure that makes the process much quicker and guarantees it satisfies all the requirements of the client.

We are a dedicated RoR development company that uses the Rails framework to provide development services such as dynamic websites, e-commerce sites, web applications, and single-page application development. This answers the most prevalent question, ‘What is Ruby used for’.

Ruby on Rails’ MVC pattern divides the task into 3 modules – model, view, controller, giving a clear functioning of the complete project.With such a structure, it splits codes of diverse functions, which are the data layer, presentation layer, and preserves a resource layer.This allows RoR developers to operate on diverse aspects at similar times.

Ruby on Rails is forming a niche as it is used by millions of websites, which includes well-known companies like Github, Shopify, Airbnb, Fiverr, to name a few.

Programming languages like HTML, JavaScript, and SQL, and CSS do not contain both back-end and front-end.Conversely, RoR language comprises both, allowing developers to create an entire web application framework.

Based on the Ruby programming language, Rails has reformed web development culture through it realistic approach. Lets look at some of the popular websites that are built with RoR.

Companies That Use Ruby on Rails

Ruby on Rails is an extremely flexible and adaptable framework. It is not limited to a single industry or even a particular type of web service. Ruby on Rails companies span the financial sector, fintech companies, startups and businesses of all scales.

RoR is also an apt solution for various websites and web applications, be it social media platforms or Ecommerce or video-streaming applications. Let’s look at some popular enterprises that utilize RoR for web development.

E-commerce websites may be the major beneficiaries of RoR, due to its extensive array of Gems covering phases from accounting, authentication to security. The Rails ecosystem comprises gems and these gems provide explicit functionality and features that are suitable for online stores.

So far, the quantity of gems, software packages having third-party Rails libraries, is continuously growing and has solutions for general functionalities like social feeds or user management.

Companies using Ruby on Rails because of its foremost benefit that it is time-saving. This feature is feasible where you have limited time or budget and contribute to rapid prototyping and speedy development.

Ruby on Rails provides all the tools necessary to empower online retailers and marketplace in an array of niches.

Looking For an eCommerce Web App?

Get a custom-made eCommerce solution that is safe and secure to use. And affordable. Let’s talk.

In this exceptionally challenging programming development world, frameworks work like a magic for the developers’ communities. Ruby on Rails is forming its niche with its Convention over Configuration software development approach.

Such companies working on Ruby on Rails are supported by classic programming conventions and not programmer-defined configurations, making the development simple while preserving the base software necessities.

Ruby on Rails application has efficient coding, stability, and rapid development, fostering the streaming sessions in the entertainment business. The company whouses Ruby on Rails, have shifted to other frameworks after their initial success, but some of them still find it very useful for their development.

Some of the established players have also shown significance in leveraging RoR by recruiting web designers. The popular video-streaming platform that uses Ruby on Rails –

Ruby on Rails is empowering online platforms by revolutionizing the hospitality and tourism sectors. Many tech-savvy online enterprises are using its innovative data management and parallel scalability to produce sprawling, international databases that are critical to their success. Also, prime hotel networks use Ruby on Rails in their online strategy.

In the human resources industry, software updates are becoming a major priority due to the increasing use of gathering and redirecting large information in a feasible way.

The companies that use Rails aid in efficient project management and maintenance of magnanimous databases. RoR has become a favorable application framework for several innovative online job portals.

Benefits of Ruby on Rails

Ruby on Rails is an open-source server-side web app framework that is written in Ruby. Unlike other frameworks, anyone can download and employ it without paying for a license. RoR can also run on Linux, which is also an open-source stage.

Its learning curve is smaller than the rest of the server-side languages. ROR utilizes a syntax that is similar to English. Hence, it is easy to read, understand, and write.
Now that you have seen which companies use Ruby on Rails, let’s look at the main business advantages of using Ruby on Rails –

Why do companies choose Ruby on Rails for web development?

Ruby on Rails renders integrated maintenance for the complete life cycle of the web applications. Some of the key factors which make companies choose Ruby on Rails are the gem of libraries, user-friendly code and well-controlled framework, cost-saving, offers frontend and backend solutions, uses MVC and DRY that saves time and increases developers’ efficiency.

How can Ruby on Rails apps be scaled up?

To scale up Ruby on Rails applications the things that should be exercised are including more servers to its architecture – horizontal scalability and getting a variety of services to use together for performing tasks – service-based architecture.

What are gems or Rails for customer relationship management?

For customer relationship management (CRM) the gems will allow you to assimilate your app with explicit CRM solutions, subdivide customers, import or export customer lists, collect relevant data, and other such functionalities. The integration of your CRM software are:

As you can see, the Ruby on Rails website examples displays many advantages for an extensive array of industries. Are we missing any?

Of course, apart from the above popular companies, there are other reputed companies working on Ruby on Rails like CrunchBase, Ask.fm, Dribble.com, Bloomberg, SlideShare, to name a few.

It has a community-driven development model that allows it to advance in reply to the opinion of an assorted user-base having a number of needs and is apt for local businesses. For more such informational blogs on this topic, you can read our Ruby on Rails blogs.

As this framework incessantly evolves, your web development company will be benefited from many innovative software solutions. Considering such validation, we understand how popular Ruby on Rails is.

For your dynamic web app development, contact us anytime to discuss your web ideas with our IT experts. At Monocubed, you will receive expert guidance from our best Ruby on Rails programmers.