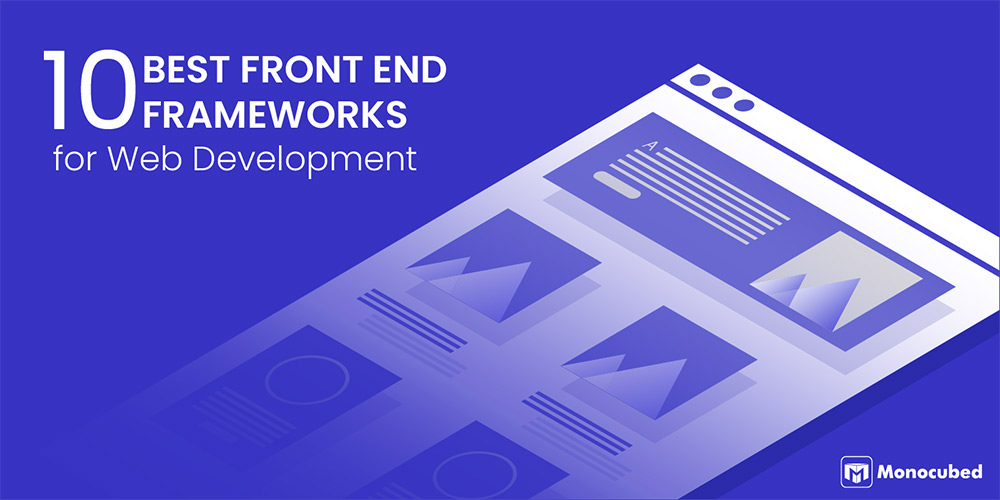 User experience is the topmost priority for every business developing a website. All the amazing features and functionalities you have coded have to be accessible to your users. Your website has to load smoothly, be intuitive to use, and provide a seamless user experience.

This requires using frontend frameworks that streamline the development of interactive, user-centric websites. With our experience as a web development company, we have gathered the best front end frameworks for web app development. Using these frameworks you can build modern, user-driven websites and web applications.

What are Front end Frameworks?

Front-end web development is the process of transforming the data to a graphical interface, through the usage of CSS, HTML, and JavaScript so that the users can observe and network with that data.

There are numerous platforms and development tools like Joomla, WordPress, and Drupal that can be utilized to build the frontend of the website.Understanding which tools are the best fit for precise tasks marks the dissimilarity between a well-designed scalable site and developing a hacked site.

The front end developers consider these points while employing accessible techniques and tools to reach the end.With ongoing development for mobile devices, such as tablets and smartphones, the designers require that the site functions correctly in the browsers on all devices.

This can be quickly done by producing a receptive web design utilizing style sheets in CSS.Performance goals are predominantly concerned with the render time, deploying the CSS, HTML, and JavaScript to guarantee that the website opens up rapidly.

Front-end development, also denoted as ‘CSS frameworks,’ are packages comprising pre-written, homogenous code in folders and files.They offer you a ground to develop while still permitting flexibility with the final design.

The primary uses of front end frameworks are that they create interactive tools and develop responsive websites. It builds consistent products for traffic gains and upgrades the look and feel of mobile and web applications.

Besides that, the following are the advantages of employing popular UI frameworks:

These technologies have gone through countless detailed repetitions, and subsequently, they deliver user-friendly experiences in the layer construction. Not only for the commercial houses, but it is also easy for the developers to learn and follow.

Turn your idea into a complete web solution with our experienced developers. Talk to our consultants and validate your idea for free.

According to State of JS 2021, React and Svelte are the leading frameworks for frontend developers, as seen in the image above. Our team of experts has curated this list of the most useful web UI libraries for developing a clean and attractive UI. We also list pros and cons of each framework to make your choice easier.

The best frontend frameworks of 2022 are –

Which is the best frontend framework in 2022?

Which front end framework should I use?

Front end frameworks are the major blocks of any software development procedure. React is employed for building the user interface, chiefly when you require to build single-page apps. While Angular increases the performance of browser-based apps by dynamically modernizing the contents in much less time since it implies two-way data binding.

What are front end frameworks?

A front end framework is a platform for developing your front end. It generally comprises some way to construct your files, associate data with DOM elements, style your components and make AJAX requests.

Talking about the best frontend frameworks, we can ascertain that the market is epitomized by a huge variety. And what is more important, the UI developers have the probability to select from the top innovating ones.

The JavaScript UI frameworks such as Angular, Vue.js and React have attained their highest positions in the market. These frameworks are immensely supported by the community and selected for their distinctive flexibility and features.Contact Monocubed, if you want to implement the best frontend framework to have an exceptional web application development.