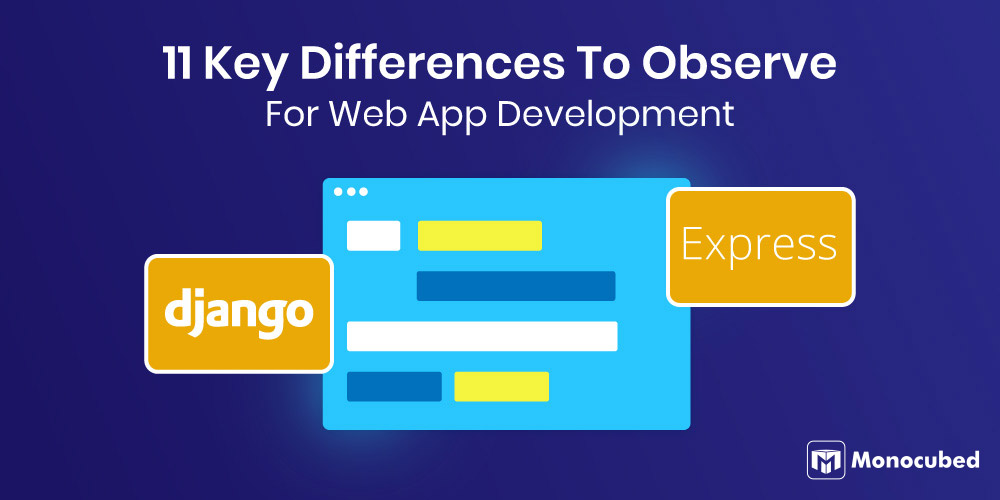 Today, web applications have turned out to be a vital part of each business. The companies want eccentric web frameworks to build versatile web and mobile apps.

Which web framework is faster?
Is Express or Django better for eCommerce platforms?
Which framework is good for MVP development?

To answer all these questions and more we bring a detailed comparison of Django and Express.js frameworks.

In this blog, we will have a detailed comparison battle of Express.js vs Django based on different aspects like architecture, programming, performance, and security.

Django Vs Express: The Key Differences

Django is an open-source web framework that observes the Model-View-Template (MVT) architectural design.

Express or Express.js, is a backend web application framework for Node.js. It is open-source and free software released under the MIT license.

An Express.js website can be done easily by the programmers in a few lines of coding within a very limited time frame.

Between Django and Express web frameworks, the former is a standalone and lightweight web server for testing and development, while the latter is permitted to set middlewares to reply to any HTTP request.

Below-mentioned is the vital difference between Express.js and Django:

Chatbots? Auto text completion? Enhanced search using images or sound? You can do all these and more with the help of our Django developers.

What is Django Used For?

The Python web framework is intended primarily to confirm high-speed development. The primary objective is to ease the formation of multifaceted database-oriented websites.

Django emphasizes pluggability and reusability of less code, components, quick development, low coupling, and the notion of Don’t Repeat Yourself (DRY principle) due to which it has amassed a huge community.

Python is utilized for files, data models, and settings. Django delivers an elective administrative create, read, update and delete (CRUD) interface that is produced vigorously through contemplation and designed via admin prototypes.

Django is one of the top Python web frameworks that provides rapid web app development. It has a pragmatic and clean design. It is recognized for having a ‘batteries included’ viewpoint, hence it is ready to be utilized.

It is well-used in Machine Learning, Big Data and Artificial Intelligence because of its speed and advanced modules. Here are some of the vital features offered Django:

What is Express.js Used For?

TJ Holowaychuk, the original author, defined Express as a Sinatra-based server, stating that it is moderately minimal with several characteristics obtainable as plugins. It is intended to develop REST API and web applications.

It is the backend technology used in popular development stacks such as MERN, MEVN, or MEAN stack, composed of one of the front-end frameworks (Angular.js or React) and the MongoDB database software.

As Express.js needs only JavaScript, it becomes simpler for programmers to develop applications without much effort. But it has a steep learning curve for beginners due to the numerous new concepts introduced in Node js.

This framework of Node.js describes that most of the coding is written already for the community to employ. You can develop multi-page, hybrid, or single-page web applications utilizing Express.js.

It is extremely lightweight and aids in developing web applications on the backend side in a structured MVC architecture design.

It is imperative to study HTML and JavaScript to be competent to utilize Express.js. It is a portion of a JavaScript-oriented technology named MEAN tech stack which stands for ExpressJS, MongoDB, Node.js, and AngularJS.

It is the back-end measure of MEAN and controls sessions, routing, error handling, and HTTP requests.

Express.js is a flexible and minimal Node.js framework that supplies a vigorous set of traits for mobile and web-based apps.

With innumerable HTTP utility approaches and middleware at disposal, making a dynamic API is easy and quick.Numerous popular web frameworks are constructed on this framework.

Below are some of the noteworthy features of Express.js:

With Node.js you can get scalable, lightweight, and super fast web apps like Netflix and Uber. Well worth your money. So what are you waiting for?

Django or Express: Which One is Better For You?

Express and Django are both free, open-source technologies.

Django is a great alternative if you are considering utilizing plenty of external libraries and a relational database. Django developers can opt for this framework if they need high security and want to build complex high-performing applications. Contact us to get professional Python application development services using Django.

In Django vs Express.js performance comparison, Express is much faster than Django. Django is generally considered a slow framework that can affect your website development phase. But performance issues can be easily negated by experienced developers.

Is Django better than Node.js?

From Django vs Node.js, the former is all about the developer’s experience and choice, while the latter is for proficient developers who require to develop practical apps. Django encourages rapid development and can be utilized for developing highly-scalable web apps. You can use this framework if the developers have excellent expertise in Python. Node.js is a popular framework of choice when you require a performative runtime environment. It is also apt for when you want to use JavaScript consistently throughout the web project.

Is Node.js faster than Django?

Both the tools, have outstanding performance and scalability. Nevertheless, Node.js does improve upon the performance and speed issues of the later. Django appears to have the advantage of high scalability and complexity, but the ‘batteries-included’ approach slows it down. So if speed and page loading time is of importance, Node.js is much faster.

What is Express.js and what is it used for?

Express JS is an free, MIT licensed, open-source backend development framework for Node.js. It is utilized for building and designing applications easily and quickly. It supplies a simple routing for the requests made by consumers. This framework offers a middleware that is liable for creating decisions to give accurate replies for various requests.

Django is an advanced Python framework, delivering simple syntax with much reliability, scalability, and flexibility. Whereas, Express offers a thin sheet of essential features required in a website, without complicating the characteristics of Node.js.

From the above Express vs Django comparison, we can analyze that both the technologies have their peculiar characteristics and should be utilized aptly as per your project requirement.

You can contact Monocubed to build robust applications rapidly with the essential functions with either Express or Django.