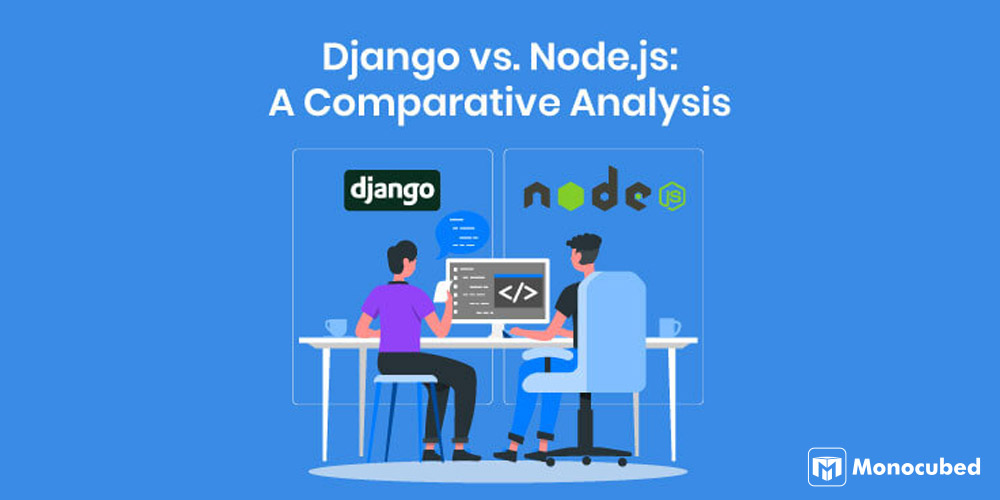 When it comes to websites and web apps, it is essential to have an interactive user interface that attracts users and keeps them engaged. But for a smooth frontend experience, it is imperative to have a well-designed backend.

There are several backend technologies, such as Rails, Laravel, Django, and Node.js that provide application architecture along with testing, debugging, and database management tools. Using back-end frameworks ensures increased productivity and a streamlined web development process.

In this blog, we take a look at Django vs Node.js, comparing two dynamic technologies for building versatile web-based applications and mobile apps with an exceptional user interface.

While developing an app, it is imperative to select an appropriate programming language. We understand that every project requires a few specifications, and hence, we have to code it with the most suitable technology.

Both, Node.js and Django, are open-source and available for free to develop web applications without any licensing. They are used in countless projects and have a vast web community.

As a Nodejs web development company in Canada, we have worked with both the frameworks and will provide a detailed comparison. Let’s start by understanding the key features of the two frameworks.

A Brief About The Two Frameworks

The main difference between Django and Node.js is that Django is a high-level Python web framework that encourages rapid development to facilitate web developers in developing applications timely and swiftly.

Node.js, on the other hand, is based on JavaScript and is used on client-side web applications. It is a cross-platform runtime environment that allows developers to execute application code on a private server instead of a web browser.

Both these technologies got equal fame and are versatile, making it a baffling situation for developers to decide which technology will be a fit for their upcoming project.

With this blog, we aim to provide an extensive review and evaluation of Django vs Node js.

Let us understand the similarities and dissimilarities of JavaScript and Python frameworks that you consider for your next project.  Get started with the ideal toolkit and enhance your efficiency in website development, to triumph a cost-efficient scheme within a limited timeframe.

Django vs Node.JS: Key Differences Between The Backend Technologies

Now that we understand the key features of both Django and Nodejs, let’s have a look at the differences between them to analyze which is better for developing web apps.

The most prominent point of debate is that Django is a backend web framework while Node.js, contrary to popular beliefs, is a runtime JavaScript environment.

A detailed comparison of Django and Node.js is illustrated below:

Django is a Python-based open-source web framework that intends to follow the Model-Template-View (MVC) architectural model. The Django web framework aids in supplying ready-to-implement solutions which allow its developers to concentrate on UI and UX of the app, and not worry about its backend technology.

The important features of Django are as follows:

After considering each feature of Django, it is clear why a web developer prefer working with the Django-like framework.

With Django’s versatile nature, web development companies can develop complex, high-traffic websites and web apps of all kinds- enterprise solutions, MVPs, eCommerce stores, social media networks or even game apps. But it is not suitable for small apps and should be avoided.

Looking for a Django Developer?

We have a pool of experienced Django developers. We help you filter the best developers for your project.

What is Node.js Environment?

Node.js is open-source and cross-platform.  It has a JavaScript runtime environment that renders JavaScript code outside a web portal.  Node.js was released in 2009 and is primarily based on JavaScript, C, and C++.

Node.js allows developers to utilize JavaScript to note down command-line tools and for server-side scripting – functioning scripts on the server instead of client-side to yield vibrant web page content, even before the page is directed to the user’s web browser.

Subsequently, Node.js, as a JavaScript model, unites web application development around a distinct programming language, instead of diverse languages for server-side and client-side scripts.

The key features of Nodejs backend framework are as follows:

After considering each feature of Node.js, it is clear why JavaScript developers around the world use the framework for custom Node js development. With Node.js you can develop full-stack apps, using only JavaScript on both frontend and backend.

Some Popular Companies That Use Django Framework

Django is a preferred choice for building web applications that are secure, scalable and user-centric. With Django, you can implement new and unique features owing to its support of emerging technologies like Machine Learning and Data Science.

Some of the giant Django players in the market that have made exceptional use of this framework and have helped them evolve and expand are as follow:

Some Popular Companies That Use Node js Framework

Many popular companies have sought to use Node.js for building – social media applications, video, and text-chant engines, tracking apps, and myriad online games.


Apart from these, there are prominent companies like Uber, eBay, Yahoo, GoDaddy, Walmart, Medium, to name a few, utilizing Node.js on the backend of their apps, owing to its easy scalability, better efficiency, highly extensible, and high performance.

With Node.js you can get lightweight, super fast, scalable web apps like Netflix and Uber. Well worth your money. So what are you waiting for?

What to Choose: Node.js vs Django

Django and NodeJS both are budding technologies that can be used as per the precise requirements of the developer.  There is no definite response to the question, ‘Which is better – Node vs Django?’

You must cautiously analyze and match all the features to accomplish your needs for developing your app.

For example, to state Nodejs vs Django, the Python-based framework is a great option if you consider employing a relational database, copious external libraries, are chiefly concerned about security, and need to build the app promptly. As a Python development company in Canada, we use Django in a lot of our projects that require data security and handling.

On the other hand, you can use Node.js if you got a nonparallel stack from a server, want great performance, aim on structuring characteristics from scratch, and need an application that carries out heavy lifting of client-side processing.

Django vs Nodejs- Which is better?

Django or Node.js, cannot be really compared to one another. There isn’t any thumb rule to follow and decide which of the two technologies can be used for web and mobile app development. Both have vast scalability and performance. Django is preferred for building scalable apps in limited time and if you require high performance, you must use Node.js framework. Being clear what type of web development you would like to build, makes it easier for you to select one.

What is a QuerySet in Django?

A collection from the database is usually termed as QuerySet in Django. It is used by Django Object-relational Mapper. When you use models to avail a single record or a group of records from database, they are returned as QuerySets.

What are the prerequisites for becoming a Node.js Developer?

If you are aiming to become a Node.js Developer, you have to learn JavaScript and all related concepts. In the industry of software development, Node.js has gained a huge demand. You must know the basics of frontend development, namely, HTML and CSS. It is vital to test your website, as Node.js is a server-side language.

The success of any web app is hugely dependent on the methods and tools that your team would use.  Both, Node.js and Django web framework, are advanced technologies that would be a benefit for your stack.

The fact is that there is no simple answer to this question, ‘Django or Node.js?’  because they both have a huge variety of tools available.

Contact Monocubed and get a free consultation session from our web experts. We have worked with both technologies and can help you clear the Node js vs Django debate.