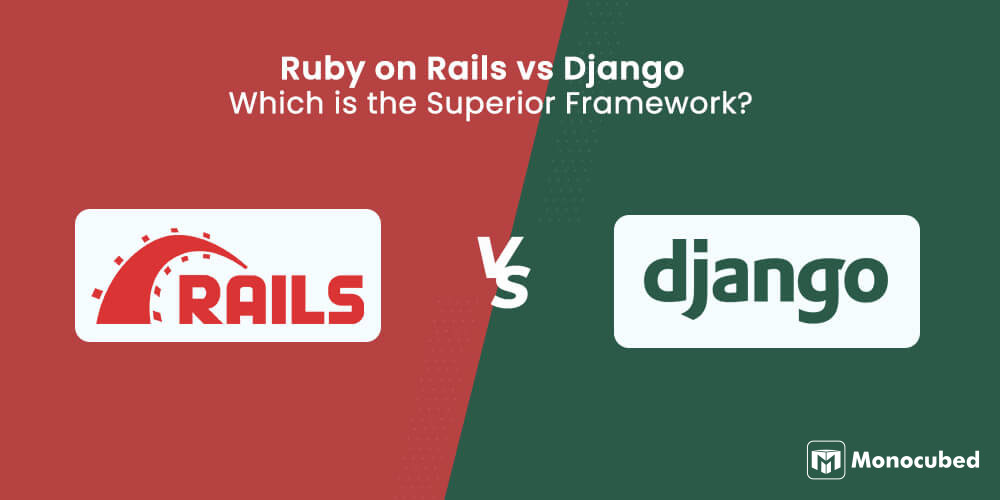 Wondering how to choose between Ruby on Rails and Django? We have curated a quick list to help you choose the right framework for backend development.

Use Ruby on Rails if your project requires the following.

Use Django if your project requires the following.

Want to know more about RoR and Django?

In this Ruby on Rails VS Django blog, we will be exploring some of the major differences between two of the most popular backend frameworks. Both Ruby on Rails and Django simplify the complex development process of data-driven, high-traffic websites.

We will look at some of the features of Rails and Django and also provide a detailed guide on when and where to use these frameworks.

Let’s take a quick look at this Django and Ruby on Rails comparison table that discusses the major differences between the two frameworks.

Now that we know the differences, let’s look at each framework in detail to understand their strengths and limitations more clearly.

Ruby on Rails is an open-source framework used for developing server-side web applications. Many startups prefer Ruby on Rails, as it is ideal for the rapid development of prototypes and Minimum Viable Products(MVPs).

It operates on the MVC (Model-View-Controller) architecture. MVC is considered to be the best design principle as it effortlessly separates business logic from the database, queries, and UI-UX code.

When RoR was first introduced in 2005, it brought new and unique features to the web developing world. With Conventions over configuration(CoC) ideology, Rails brought in a completely fresh way of building web applications.

Validate your idea with our professionals. Develop a quick MVP to test your web app idea using Ruby on Rails.

Django is a full-stack web framework used for developing robust, large-scale web apps and websites. It follows the object-oriented paradigm and is generally known as ‘the framework for perfectionists’.

It is a general-purpose, open-source, and free framework, making it easily accessible. Based on the Python programming language, Django extends all the philosophies of Python to provide a pragmatic, simple, and portable platform for developers.

Features of Django are highly praised by developers. It was designed with the purpose of simplifying the process of creating complex and database-driven websites.This framework has a neat and pragmatic design and encourages rapid development.

Both the frameworks are robust server-side frameworks used for the backend development of web apps. They share a lot of similarities between them such as the extensive database support, security features, and a similar approach to web application development.

Now let’s look at the main differences between the Django and Rails web frameworks.

Where and When to Use Ruby on Rails?

Now that we understand the difference between the two backend frameworks, let’s find out when to use it. With our experience as an RoR development company, we recommend using the Rails web framework in the following cases-

Where and When to Use Django?

Top Python development companies like Monocubed, prefer Django for Python app development. But when comparing with the Rails framework, it is important to look at your requirements before choosing either.

We suggest you choose Django framework when developing-

Django VS Ruby on Rails- Which One is Right for Your Requirements?

When it comes to Rails VS Django, although both are backend frameworks, they are suitable for different types of web projects.

Ruby on Rails is a better choice than Django for early-stage startups and small organizations. If your project requires a simple web application, Ruby on Rails is right for you.

Django, on the other hand, is better for large enterprises that require handling multiple databases and a more standardized, large-scale web application.

However when it comes to eCommerce projects, Ruby on Rails and Django are both popular web frameworks with excellent security measures. Rails performance and Django’s community support will help you decide between these popular web development frameworks.

Our expert developers have answered some commonly asked questions. For any queries or information, feel free to contact us any time.

What are web development frameworks?

A web development framework is a software tool that is used for simplifying and streamlining the development of websites and web apps. A web application framework allows developers to develop customized web APIs. It offers the base for building and deploying web services, web applications and websites on the internet.

Which web framework to use – Django VS Rails?

Django and Rails are two of the best web development frameworks available for server-side web app development. Django is a Python framework used for building scalable, secure, highly performative web apps. Contrarily, Ruby on Rails is based on Ruby and is preferred for rapid development of MVPs, high-speed websites and web apps and quick prototyping.

Is Rails faster than Django?

Yes. Ruby on Rails is comparatively faster than Django. Django is based on Python, which is a slow language owing to its run-time compilation and dynamic typing. On top of this, the framework is packaged with a lot of functionalities and libraries that slow down the speed of Django. For instance, Instagram uses Django to power a high-traffic application that engages millions of users without affecting speed or performance.

Read our blog on in-depth comparison between Django and Node.js to find the key difference between the two backend technologies.

This Django vs Ruby on Rails blog closely compares the functionalities and features of both popular frameworks. In conclusion, although no framework is superior, you can choose the framework which is better suited to your project requirements.

Still, confused between RoR vs Django? Schedule a free consultation with our IT experts. Our developers are well-versed in Rails and Django, and can better guide you in finding the ideal fit.