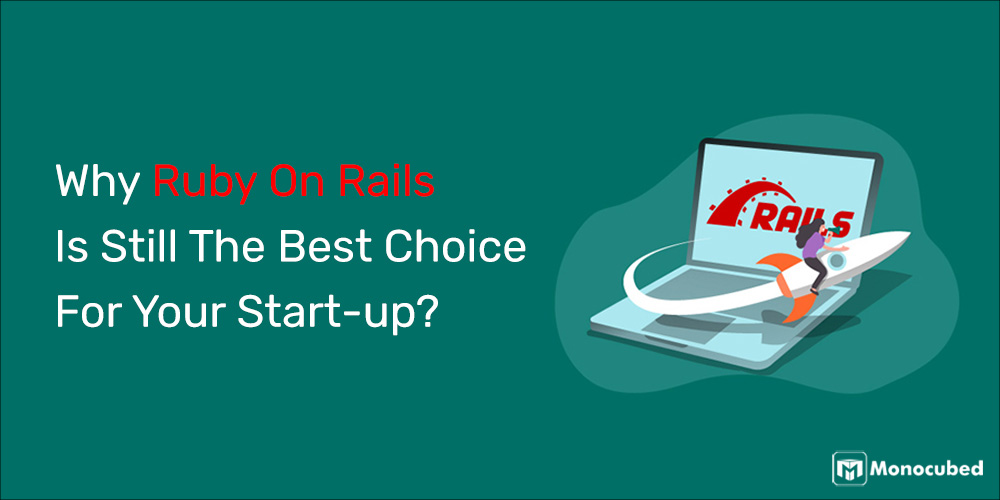 In this fast-paced world, web development trends are constantly evolving. Web frameworks are a major boon for the developers’ community to build trending, modern web apps.

One such framework is Ruby on Rails. It is useful in –

In this blog, we will answer why Ruby on Rails is still the best choice for your start-up by examining its many exceptional features.

Rails is an open-source software that provides everything you require to create robust applications. This blog will help you understand what is Ruby on Rails, why ruby on rails is so popular among startups and why you should hire Ruby on Rails web developer for your web project?

What is Ruby On Rails Framework? 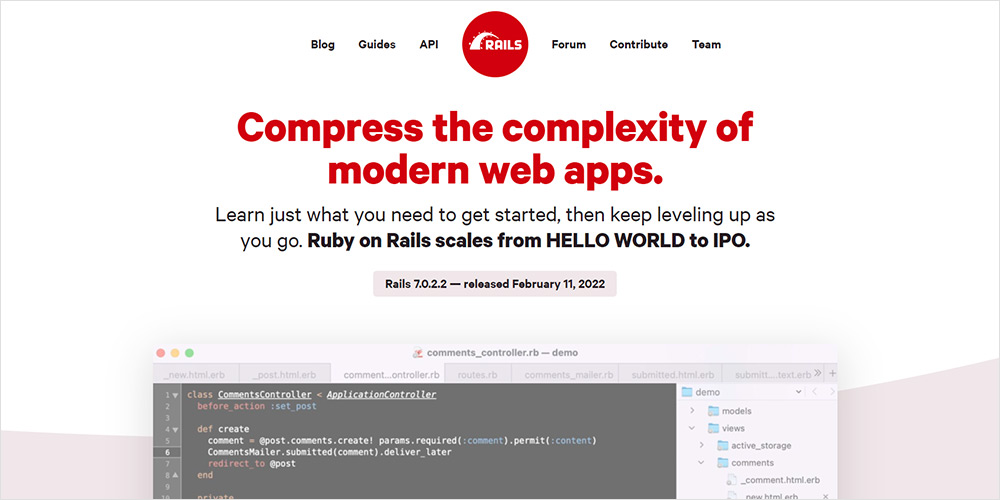 Ruby on Rails is a server-side web framework that is written in the Ruby language. Released under the MIT License, it follows the Model-View-Controller (MVC) architecture pattern.

Ruby on Rails supplies default arrangements for web service, web pages, and databases, which makes it easier for a Ruby developer.

Rails encourages the usage of web standards like XML or JSON for data transfer and frontend web languages like HTML, JavaScript, and CSS for the user interface.

Let’s look at the major reasons why Rails is perfect for building powerful web applications.

7 Reasons Why Ruby on Rails is For You 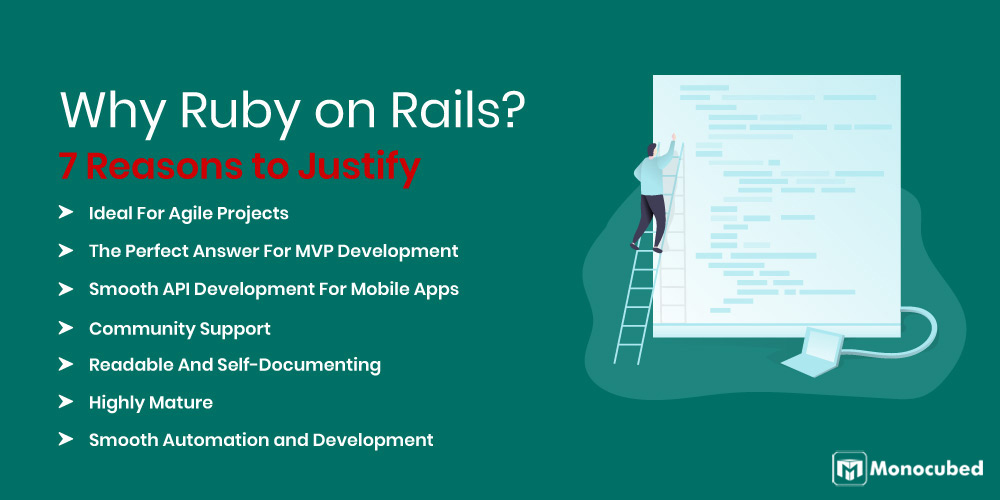 Want to Develop an MVP Fast?

Design and develop a quick, low-cost MVP for your web app idea with the help of our experts.

Each new version of Rails released improves the features and performance of the framework. The latest version, Ruby on Rails 6.1.4, has significant enhancements in terms of security, new gems, scalability, and other new features.

But recently, there have been many discussions about Ruby on Rails –

The main reason Rails is considered to be dead or decreasing in popularity is less scalability and low performance.

Let’s look at these problems in detail and see if RoR actually lacks these features.

Advantages of Ruby on Rails For Web Development 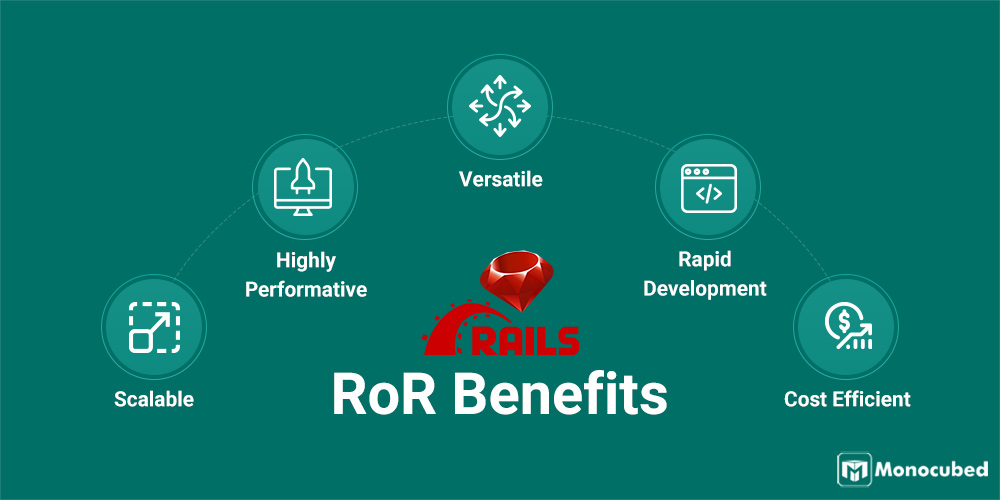 Now that we have understood that Ruby on Rails is still very much in demand and preferred by a lot of Ruby developers, let’s look at why.

Let’s look at each advantage in detail to understand why RoR is a good option for you.

Have a Web App Idea For Startup?

When And Where To Use Rails?

Now that we have seen some vital Ruby on Rails’ advantages, it is time to answer – ‘What is Ruby on Rails used for?’ Rails can be used in projects from dissimilar spheres to build numerous types of applications as it is a multi-purpose tool.

The following list exhibits when and where we can use Ruby on Rails:

Let’s discuss. Be it a complex eCommerce solution or a high-performing social media app, we can help you develop a custom web solution.

Which Websites Use Ruby on Rails? 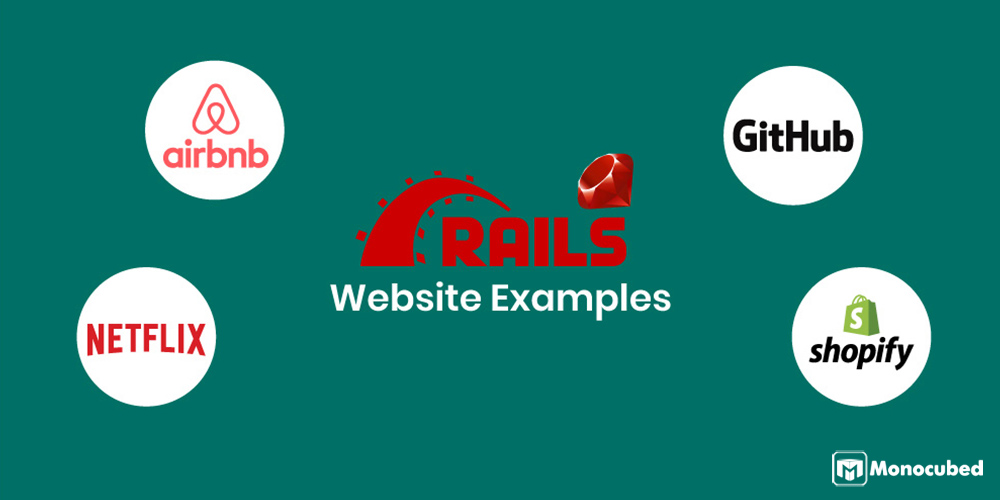 Ruby on Rails framework obtains support from innovative start-ups and world giants, and the number of popular companies using Ruby on Rails increases every day.

What is Ruby on Rails used for? We have stated some of the well-known Rails projects in the preceding section. Now let’s see websites using Ruby on Rails:

Why use Ruby on Rails?

Ruby on Rails is a web development tool that offers developers a framework and structure for the code they form. This framework aids developers to develop applications and websites as it minimizes the common repetitive jobs.

Why is Ruby on Rails still the best choice?

Ruby on Rails is extremely easy to preserve and modify. This states that the developers do not have to perform re-coding and repetitive tasks and thus, save much of their time. The Ruby code is very clean and has fewer bugs.

Why do companies choose RoR for web development?

Some of the key factors which make companies choose Ruby on Rails are the gem of libraries, user-friendly code and well-controlled framework, cost-saving, offers frontend and backend solutions, uses MVC pattern and DRY that saves time and increases RoR developers’ efficiency.

Can I use Ruby on Rails for eCommerce sites?

Yes, Ruby on Rails is excellent for developing eCommerce web platforms. Due to its high-security features, scalability, and performance, Ruby on Rails is a popular choice among eCommerce companies. In addition, The Rails community is very active and provides helpful solutions and Gems that can be seamlessly integrated into your web development project.

In this blog, we explained why Rails is still the best choice for your start-up. Ruby on Rails is a well-established tool for forming technically multifarious web projects.

All its benefits make Rails a robust tool to develop MVPs that satisfy the market, aid in launching successful start-ups, and in enhancing the efficiency of large companies.

Contact Monocubed to build a diversity of projects and get customized software solutions aimed to attain defined business objectives.

The quality codebase, excellent community, size of the module database, and the maintainability of Rails applications make it the most preferred choice for well-renowned companies like GitHub, Airbnb, BaseCamp, Bloomberg, and Zendesk.