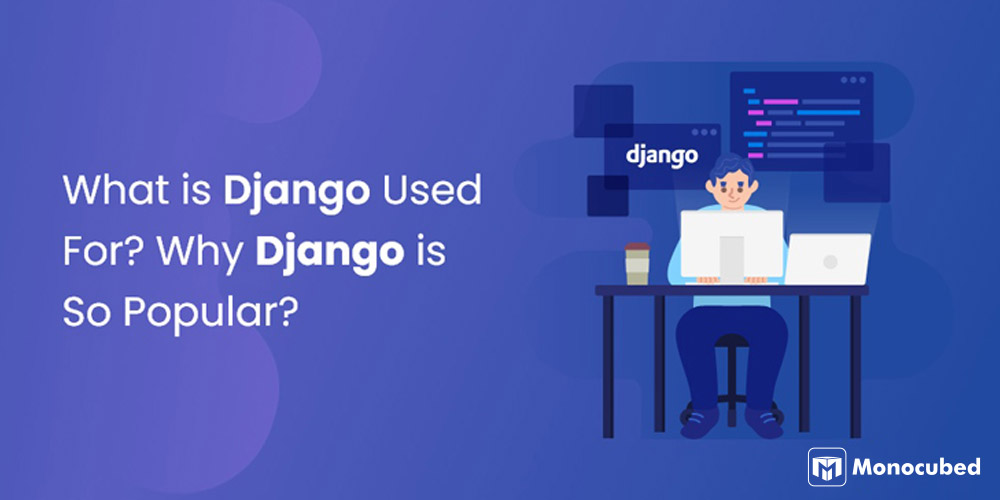 Before beginning a new project, you are required to gauge which programming language and framework is apt for your desired results. Selecting a development framework amongst varied frameworks available in the market is a tough call.

Many companies prefer Django, a high-level Python framework, for their web application development projects. But what is the reason? What is Django used for? Let’s dive deep into the concept and usages of the Django framework.

Django is a free and open-source Python-based framework that encourages pragmatic design and rapid development. It follows the model-template-views (MTV) architecture. It is upheld by the Django Software Foundation (DSF), an American self-governing association recognized as a 501(c) (3) not-for-profit.

Django is extremely fast and completely loaded as it takes care of content administration, user authentication, security features, and assists to evade cross-site scripting and SQL injection. It presents good documentation and loads of resources which aids new developers to learn and proficient developers refer for any development project needs.

How is Django Different from Python?

Django and Python are interconnected but certainly, not the same. Python is an object-oriented high-level programming language that has extensive library support. It makes the execution of various algorithms and programs easy. It aims to aid programmers in writing logical and error-free code for diverse projects.

On the contrary, Django is a web-based Python framework that sanctions you to develop robust web applications. It has inbuilt features like default database – SQLlite3 and Django Admin Interface. Below mentioned aspects depict the difference between Django and Python:

What is Django Used For?

The Django framework makes use of a potent Object-Relational-Mapping (ORM) layer. It streamlines dealing with data and databases and speeds up the development process. Without ORM, web developers would have to form the tabular display themselves and explain the operations or queries, which sometimes gets interpreted to the sizable amount of SQL that is inclined to be tricky and challenging to track.

Unlike the rest of the web development frameworks, its models are all arranged in one file. Usually, models.py, which might make it perceived as jammed for larger projects.

Why is Django gaining immense popularity these days? Over the years as a Python app development company, we have used Django in a multitude of projects. Our development team prefers Django for its scalability, flexibility, and speed of development. Let’s explore more to find out what is Django used for:

Let’s take a concise view of the instances where Django can be used:

Usually, some enterprises prefer to build their projects on more than a single framework. Django can also get utilized to build distinctive features mentioned below:

The chief purpose of Django is to empower developers to concentrate on components of the app that are novel instead of squandering time on previously built ones. It is more feature-rich than the rest of the frameworks in the market. It takes care of all the hassle of the web development framework.

Django releases fresh security patches promptly. It is commonly the first one to reply to susceptibilities and alert the rest of the frameworks.

Confused where to start? Don’t know how much it will cost? Wondering if it will be successful? We’ve got you covered. Let’s talk.

While Django is an incredible framework, there are a few disadvantages that may or may not be an issue. The URL stipulating with fixed expressions is not an easy assignment to achieve for beginners. It feels a little bloated for small-sized projects. Some individuals find it populated with big-sized projects since models are all encompassed in a single file.

Let’s examine in detail the disadvantages of using Django:

Is Django better than Node.js?

Django vs Node.js states that Django is exceptional in handling high-traffic apps and numerous requests; whereas, Node.js is preferable in creating robust apps and can administer ample requests. Both the frameworks are appropriate for developing scalable apps.

Is Django used for frontend or backend?

Django is an open-source Python web framework for backend web apps. Its prime goals are flexibility, simplicity, scalability, and reliability. It has its naming scheme for all components and functions, for example, HTTP responses are known as ‘views’.

How is Django different from Python?

Django is a Python-based web framework that permits you to develop powerful web apps easily. While Python is a high-level, object-oriented language that has massive library support making the web application of several algorithms and programs easy.

From the above blog, we have seen the vital aspects stating what Django is used for. This framework is versatile and permits the developers to focus on business logic rather than writing general utilities. Contact Monocubed and get your applications to offer reliable, scalable, and fast services based on traffic.

Django helps developers to build customized web apps using Python by offering many plug-ins, tools, and features. It has libraries, APIs, and templates which function together. Thus, you can use Django to develop applications with minimal changes, additions, and cost.