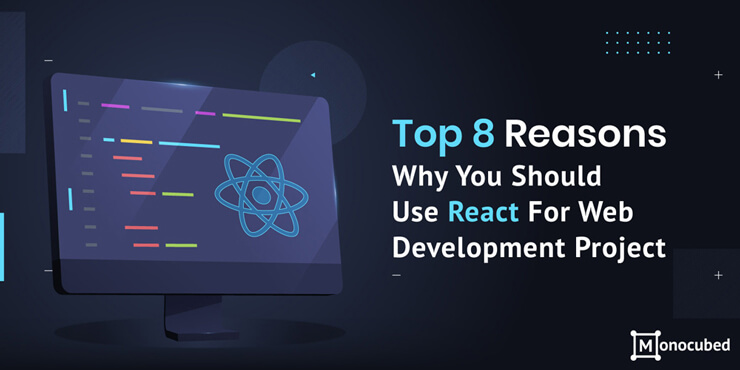 Frontend frameworks and libraries are an essential aspect of the web development process. For building high-performing responsive websites and web applications, using libraries has become imperative. ReactJS is one such front-end web development tool for developers that is used by around 4.5 million websites worldwide.

With the speed at which the digital world is moving, there are new libraries released every year. It is understandably confusing which library or framework to use for which project. In this blog, we will share in detail which projects require your company to use React.

We have curated a list of the top 8 reasons why should you use React in 2021.In this blog, we will discuss some remarkable features of ReactJS that set it apart from its counterparts, such as Angular or Vue. But first, a brief introduction about what is ReactJS, what it is used for and why it is so popular.

ReactJS is a JavaScript component library for creating user interfaces for websites and applications. Developed by Jordan Walke in 2011, it sets a new precedent for developing fast and dynamic websites using JavaScript.

The User Interface or UI is anything a user uses to interact with a website, such as a button, a link, menu tabs, or search bars. React offers an extensive collection of such UI components that front-end developers use for creating personalized interactive elements.

React mainly focuses on building the View Layer (consisting of all the parts of a page visible to users) of an application.

Many users describe React as a framework instead of a library. They are not wrong in doing so. After all, React is more than just some pre-written code snippets and functions. Today, you can build whole applications for web browsers and smartphones using ReactJS and React Native.

It has a robust ecosystem and is remarkably flexible, and can be integrated with other developer tools and libraries for implementing complex functions.

With the assistance of features such as Virtual DOMs, JSX, impressive state management, and reusable components independent of each other, React users can significantly cut their development time.

You can create clean and manageable codes with React’s strict structure rules and unidirectional flow of data. It is also effortless to test and maintain these web applications and websites.

Now let’s look at what ReactJS is used for and why and where web developers employ React’s vast usability.

What is React Used For?

ReactJS is a multi-purpose, open-source library that is mainly used in front-end development, focusing on building user interfaces. It developed a new way of rendering websites, evolving the responsive nature of web pages.

Some use cases of React are mentioned below. A company generally prefers working with it when their project involves one of the following-

8 Reasons Stating Why Use React

React JS is the most popular JS library in today’s times. Even after years of its release, it is consistently used by web developers. It is the best JavaScript UI library for creating and maintaining views.

The two main features that make React more than just a library are JSX and Virtual DOMs.

JSX or JavaScript extension combines HTML syntax with JavaScript making it easier for developers to interact with the browser.

Virtual DOM is a virtual copy of the DOM tree created by web browsers that React creates for simplifying the process of keeping track of updates in real-time.

Let us look at some other significant React features in detail to understand their functionalities and popularity.

These are the main motivations for React being a top choice for many developers. ReactJS is a performative, structured, and productive library with numerous advantages.

With features such as virtual DOM, reusable components, one-way data binding,  Hooks, and JSX, the library provides a robust environment.

Therefore, React, developed way back in 2011, is still very much relevant and is highly recommended for web development. In the next section, we will discuss a few React features that make it stand out among other JavaScript frameworks.

React JS VS Other JavaScript Libraries

When To Use React?

As we have seen, React JS is a very flexible, multi-purpose library. With the wide variety of features it offers, it can sometimes get a little tricky to comprehend when to use it. Airbnb and Uber started using React once Facebook released it in 2013. Cloud service Dropbox and news reporting channel BBC all use React in their websites and web and mobile apps.

We recommend using React JS for front-end development for-

Imagine if a user had to refresh the page to get new recommendations on Netflix or refresh each time you scroll on Google.

SPAs keep the repetitive parts of a web page like the menu section and headboard and only update the necessary content when a user takes action like a scroll or a double click or left-click.

ReactJS is apt for SPA as these sites continuously update content on their sites based on data from web servers. The feature-rich library with the provision of Virtual DOM, Redux, and unidirectional data flow is able to handle the rigorous content updation process expertly.

To read more on SPAs, you can visit our blog – What is Single Page Application? Examples, Pros, and Cons

For dynamic websites that require handling multiple users and their requests, ReactJS is the best solution. It is also imperative that the site doesn’t require repeated refreshes to avoid loss of users.

Mobile apps and Smart TV apps can be built effectively using React Native. With Native, you have the flexibility to be creative with the same functionalities in a mobile app as a website. Native apps work like web apps but have a native feel and look.

Data Visualisation tools require continuous data updations. Dashboards compile and display the business analytics of a project. These dashboards are generally constructed like a SPA on the client-side, affecting the app loading time significantly.

With React, you can use JavaScript to implement the same code on both the client and server-side. Server-side rendering is achieved much more quickly, and React will render and display the webpage without much delay.

React apps can be made SEO-friendly with a few tweaks, such as pre-rendering. But SPAs and other dynamic websites may become slow if rendered previously. Next.JS is the best option for the SEO optimization of your React sites.

If your team is familiar with HTML, CSS, and JavaScript, and you require personalized apps, React is the best choice for you. With an easy learning curve and no complicated jargon, your team can easily develop a cost-efficient solution.

React is a widely popular library in the developer’s community. Although there are many other frameworks in the market today, React stands its ground. With the various innovative features and functions it offers, it is hard not to see why. We recommend you give React a chance for the next suitable project.

Why would you use React in your project?

React is a multi-purpose library that will take care of all your frontend needs. It’s rich with features and will be an ideal choice for web application development. React components and templates are perfect for creating a flawless user experience and maintaining traffic. We highly recommend using the React library for dynamic web interfaces and state-of-the-art user interaction.

Why is React gaining so much popularity?

Simplicity and flexibility is the reason behind React’s popularity. React library provides users templates and elements that serve as a base for developing creative web interfaces. The high-performing nature of React apps is also a plus point that makes it a company favorite.

Why is ReactJS better than other frontend frameworks?

ReactJS is a web development tool that is preferred due to React components. A web app developer uses flexibility and code reusability to his advantage. React provides high performance, cost-efficient development, modularity, reusable wrapper components, and other benefits for rapid development.

As discussed in the blog, React is a very famous JavaScript library being used across the world. It offers state-of-the-art functionalities and is the perfect choice for developers looking for an easy-to-use and highly productive JavaScript framework.

With new libraries and web frameworks being developed every year, it is tough to predict which technology is here for the long term. But ReactJS has proved its durability for the last 10 years against the likes of Angular, Django, Vue, and Ruby on Rails. You can read our blogs on Angular Vs React and React Vs Vue for a more detailed comparison.

For any further information, you can Contact Monocubed. We provide the best development solutions personalized to your needs. Don’t forget to mention in the comments your experience using React JS.