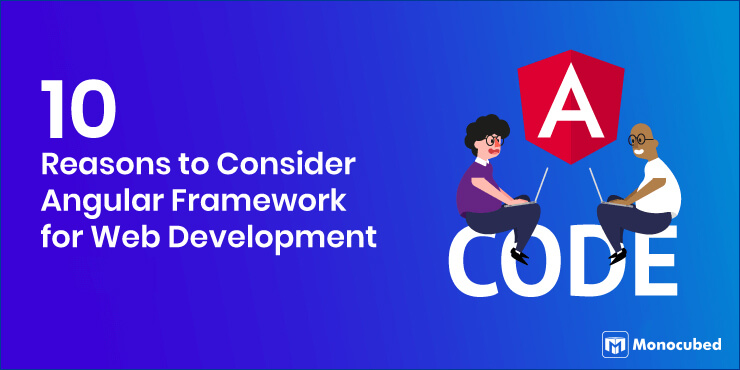 Businesses are striving to become highly digital for enhancing their presence and growth.

There is an intense competition to draw web-traffic amongst numerous websites that are already on the web. Here, the urge for an interactive web and mobile application is sensed. It has become a crucial factor to promote business success.

From the number of programming languages available, JavaScript is widely used amongst web workers. This would make you wonder which JavaScript framework you should use for optimal results.

Angular is highly preferable as a robust frontend tool supplying components that assist people to write easy-to-use, readable, and maintainable code.  Whereas, AngularJS is a front-end Javascript-based framework. It is primarily used to build processes of single page web applications (SPAs).

Being a web development company in USA, we provide Angular development services. We use the framework in a lot of varying projects – single page apps, web portals, social media websites and more.

What is Angular Programming?

Angular is a framework that uses JavaScript-based TypeScript programming language. It took the developer’s community by storm with its introduction in 2010.

Looking at the history, it was in 2016 that its Google team invented the inheritor to Angular JS – Angular v2, or Angular. Projects built in Angular2 would run without any problems with Angular 4.

Angular 6 was released with the changes and had the main focus on the toolchain, rather than on the framework, making it run speedily with Angular in ng-addons, ng update, decorator, CDK Components, Angular Elements, metadata, CLI command reference workspaces, RxJS v6, and other such types.

Angular 8 featured dynamic imports for sluggish routes, TypeScript 3.4 support, differential loading for all application code, Angular Ivy as an opt-in preview and others.

Angular Universal is the method of server-side rendering (SSR) an application to a HTML.

An Angular Universal program is a community-driven program to enlarge on core API from Angular to assist any developer to perform this rendering of Angular apps in a diverse situation.

What is Angular Framework?

Angular programming language, usually referred to as Angular 2+ or Angular v2, is a TypeScript-based web application framework.  With its introduction, it is an open-source that is an absolute rewrite from the same Google Angular Team that developed AngularJS.

With the subsequent versions of Angular, it became more efficient than the older versions; particularly core functionality was shifted to diverse modules.

10 Reasons Why You Should Use Angular

Angular, the most popular software development tool, has gained much recognition and recommendations from the developers’ community across the globe. With the increase in fame for building user interfaces, the Angular community has grown widely.

This tool has a lot to offer to the industries and hence, is rendering an opportunity to discover its features, functionalities, and advantages for mobile and web app development.

The Angular framework has an inbuilt dependency injection subsystem which is valuable for developers building applications in simpler ways.

The following are the reasons stating why Angular should be the choice for an enterprise to build its website pages and apps.

The default system of Angular technology offers everything that you require.  This comprises tools to consider routing so that you can effortlessly procure data binding that you desire to include in your app.

Below are the crucial things or pros stating when to use Angular?

From one of our previous articles, Angular Material vs Bootstrap, it can be gauged that the former is a set that includes ready-made, well-tested UI modules, and Material design components.  It follows Google’s Material Design philosophies.  In addition to this, Angular Material encompasses a variety of components, namely, forms control, indicators, buttons, and other parts.

When Should You Use Angular?

The global business expects a robust enterprise web app with the cutting-edge codes, observing the required guidelines. These enterprise-level Angular applications must be built in such a way that they are highly-optimized, business-driven, and user-centric, which in turn aids to enhance business growth.

Choosing Angular for web portal development of enterprise applications is ideal as the potentials of goal attainment is increased as it is transcribed in Type Script and has the list of following aspects:

Want to Streamline Your Business Process?

With an enterprise solution, streamline and simplify your business process. Be it a CRM, ERP, HRM, or a completely custom solution, we can help you develop it.

Picture yourself in a space where there is no network, for example, and you want to search for a nearby provision store.  Your app has everything you want but it cannot function if you are offline. At every instance, if you lose network, you face a halt in that application.

This will make you wait for a few moments or more for the first ever page to load and setup.  Eventually, it will result in cancelling this application.

To evade this, the progressive web application was built.  With the capabilities to deliver a smooth user experience in those areas where there is no network or links, PWA employs the existing browser technologies.  It utilizes the service workers and they act like a proxy intercepting network request and caching the response.

Then the entire app is sanctioned to be downloaded in the client system.  Thus, the consumer can operate the app even on being offline.

What is Angular used for?

Angular is a frontend development framework that renders you the tools as well as a design model to develop your project in a sustainable way. This TypeScript based framework has all the features required to build large-scale projects, as the Angular group believes. Dependency injection certifies that if one component is altered, other components allied to it will be transformed automatically.

What are the advantages of using Angular?

Among the varied advantages of Angular, the peculiar benefit is the fact that Angular would give you a break from MVC (Model view controller) structure, as it is a component-based pattern. Some of the crucial advantages of using Angular are that the two-way data binding is supported, Template syntax (both angular and static) and validations forms are also supported.

Is Angular a good framework?

Angular JS, developed by Google is a contemporary JavaScript framework. It is a good framework as it eases the frontend website development. It is based on MVC pattern and is used to develop interactive single page apps. Angular has vital characteristics like API client, scope management, filters, directives, validation. It comes with components and tools that reduce the time spent on application development.

What is Angular in web development?

Angular is a frontend framework used for the development of single page applications. It has a vast array of implementations in the field of web, and is an ideal choice for enterprise web applications, single page apps and eCommerce websites. Angular web development produces highly performative websites that are scalable, secure, flexible and extremely user-driven.

Angular framework has the capacity to get DOM(Document Object Model) manipulation and it can adjoin the element traits, jQuery, and JavaScript to exercise in the inner HTML. As a result, the web apps can load faster if we compare it to other frameworks.

Angular provides several benefits to developers, which is the prime reason why some of the best companies around the world employ this tool for their projects.  YouTube, Crunchbase, Blispay, Udacity, Google Cloud are some of the giants that use this robust framework.

Contact us, if you want to incorporate the progress of this client-side framework that supports multiple platforms, supplements the services with a critical purpose, and utilizes it simply with dependency injection.