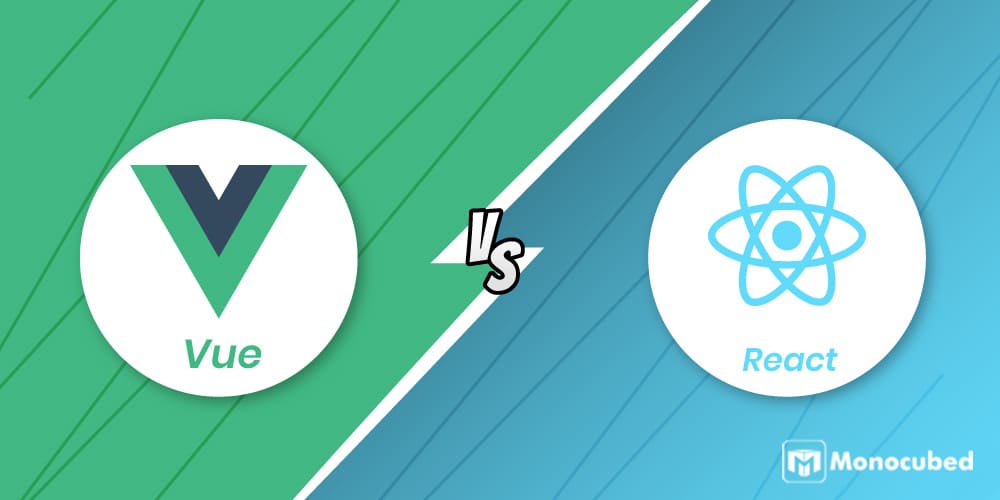 React.js and Vue.js are the two frontend JavaScript frameworks that are popular in the developer world. React works together with HTML documents through virtual DOM and is abided by a declarative form of programming.

On the contrary, Vue is seen as a progressive framework that states that you can migrate your current projects’ features at a given time.

Both React and Vue offer software developers a constructive approach to building varied web applications, but each has its best usage cases and responds to different business needs.

In this article on Vue vs React, we will explore its concepts and what makes these two technologies unique.

As a web development agency in Canada, we let our experienced web developer explain the difference between React and Vue. Let’s start with understanding what exactly is Vue?

Vue.js is a front-end and open-source JavaScript framework. Its model-view-view-model architecture is used for developing single-page applications, progressive web app, and user interfaces.

It is developed by Evan You and employs ‘high decoupling’, permitting the Vue developers to gradually make user interfaces.

Vue.js is an advanced framework for developing user interfaces. Contrary to the rest of the monolithic frameworks, Vue js is created from scratch to be incrementally adoptable.

The main library of the Vue framework is dedicated to the view layer only and is pretty easy to pick up as well as incorporated with many libraries or prevailing projects.

Moreover, Vue js is also impeccably proficient in powering classy single-page applications when utilized in an arrangement with supporting libraries and contemporary tooling.

Vue.js is one of the most renowned web frameworks that is used to streamline web app development.

Vue js can be easily assimilated into huge projects for front-end app development without any problems.

Progressive features essential to build complex apps, such as state management, routing, and build tooling are presented via Vue js libraries and packages. Nuxt.js is one of the best solutions for Vue developers.

Below are some of the vital features presented:

Get your idea validated from professionals for free. Consult about technologies to use and features to add. Start designing.

It is conserved by Facebook and a group of distinct companies and experienced React developers. React can be utilized as a base in mobile apps or single-page application development.

Just like Vue, React js follows a component based architecture. Nevertheless, React is only concerned with delivering the data to DOM.

So forming React applications generally necessitates the usage of additional libraries for routing and state management. React Router and Redux are examples of these libraries.

React employs a declarative pattern that forms it easier to reason about the application and targets to be both flexible and efficient.

It schemes simple views for every state in the application and React will competently update and deliver just an apt component when the data alters.

The declarative view makes the code more anticipated and simpler to debug for React developers.

React apps are composed of manifold components, each accountable for offering a trivial, reusable part of HTML.

The components can be amalgamated within several other components to permit complex applications to be developed out of uncomplicated building blocks.

At present, React.js is achieving rapid popularity as the best JavaScript framework amongst web developers. It is playing a vital role in the front-end environment.

The significant features of React.js are as follows:

Vue vs React: The Vital Differences

Vue and React are two web frameworks that are dedicated to making the life of developers easier. They speed up the procedure of turning a notion for an online project into reality.

By default, Vue utilizes HTML templates, but there is an alternative to transcribing in JSX. On the other hand, React solely uses JSX.

The following table depicts the noteworthy difference between Vue and React:

Advantages and Disadvantages of Vue

From the above table on Vue js vs React, we can gauge that there are some benefits of utilizing Vue js, which must inspire developers to employ it in the projects.

For example, Vue js is similar to Angular in various aspects such as two-way data binding, and it endures to relish its growing popularity as compared to other frameworks available in the market.

Advantages and Disadvantages of React

Talk to us and develop a rich, attractive UI-UX design using React that grabs your user’s attention. Let’s start designing.

Which is better – Vue or React?

In comparison between React and Vue frameworks, the former delivers more flexibility and is as stable as the latter. But Vue is more organized and easier to set up which results in reduced project duration. React documentation is good, but Vue documentation is mostly considered better. Also, Vue is simpler to learn as compared to React.js.

Angular vs React vs Vue – Which one is best?

Vue offers advanced customizability and henceforth it is easier to learn than Angular or React. Furthermore, Vue js has an overlap with React and Angular by their functionality like usage of the components. Therefore, the evolution of Vue from either of the two is an easy alternative.

Will Vue takes over and React?

Vue is relatively a new framework, and it will take much time to touch the scale of the React environment. Though both the frameworks have their own set of advantages and disadvantages, React is certainly the best framework that you can opt for the next development project.

React and Vue both are great tools for developing an interactive user interface.

To select which one is apt for your project, you have to take several factors into account, comprising your business needs, specific use case, developer availability, environment, timeframe, and budget.

From the above discussion on React vs Vue, if we talk about performance, Vue is on par with React.js. On the other hand, React.js is great for developing complex enterprise applications.

Contact Monocubed, if you have a web app in mind and require experienced developers to understand your project and develop using React or Vue.