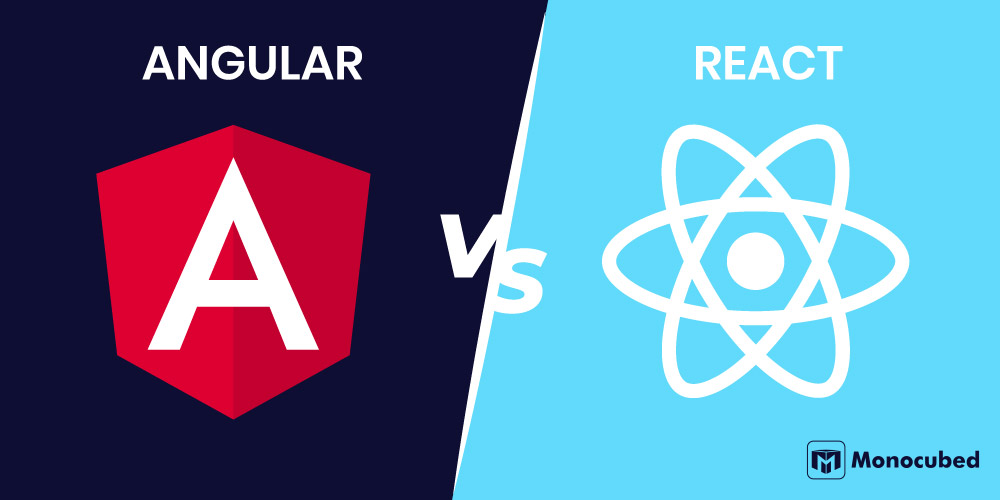 But how to select the best between the two?  Should you consider the project requirements to form a precise decision?  Or should you take into consideration its popularity and development time in an initial stage?  There have been loads of discussions on React vs Angular.

Let’s examine the difference between Angular and React that will help you to choose the best technology for your next or prevailing project.

A Brief On The Frameworks

ReactJS was developed by Facebook as a front-end JavaScript library for developing user interfaces.  React utilizes a declarative style of programming to define the UI state.  Whereas, Angular is a front-end development framework led by Google.  It is a fragment of the MEAN stack and is attuned with a great number of code editors.

It is mostly considered for making dynamic websites and apps.  Let’s look at both the web frameworks in detail and understand their features before a comparison battle.

Angular: At A Glance

Angular, usually denoted as Angular 2+ or Angular v2 and above, is an open-source, Typescript-based web app framework managed by the Angular Team at Google and by a community of corporations and individuals.  Angular is a thorough rewrite from the same team that developed AngularJS.

Angular is an all-inclusive term that is employed for all the versions which got released after Angular 1, comprising versions from Angular 2 to Angular 10.  Furthermore, Angular is based on Typescript – the superset of ECMAScript 6 (ES6) with lambda operators, reflection’s mechanism, or iterators, while AngularJS is completely based on JavaScript.

Angular is a framework and platform for developing single-page client apps utilizing Typescript and HTML elements.  The Angular framework is transcribed in TypeScript.  It exercises optional and core functionality as a set of Typescript libraries that you might import into your applications.

A vital part of the JavaScript frameworks, Angular is the most well-known front end development tool to date.  Each version of Angular is feature-rich and has been advancing with smarter aspects.  Let’s take a look at the key features of this extensively accepted front end framework:

Get your idea validated by professionals. Discuss unique features to add. Know the cost of development. Know the timeframe. Let’s start building.

React: At A Glance

React, also termed as ReactJS or React.js, is an open-source front-end JavaScript library used for developing user interfaces or user interface components.  React, a UI component library for front-end JavaScript development is managed by Facebook and a group of companies and individual developers. React can be utilized as a base in single-page and mobile app development.

Nevertheless, React is concerned with sending data to Document Object Model (DOM), and so generating React apps ordinarily requires the usage of supplementary libraries for routing and state management.  React Router and Redux are examples of these libraries.

This DOM compares the React components preceding states and updates the items in real DOM that were altered, instead of apprising all of the components over again, as other conventional web apps do.

React observes a unidirectional data flow which means that React app developers frequently nest child components within parent components in web applications.  Since the data flows in a single way, it becomes simpler to debug errors and know where the issue occurs in an app.

Presently, ReactJS is gaining popularity as the best JavaScript framework amongst web developers.  It is having a critical role in the front-end environment.  The significant features of React JS are as follows:

Angular vs React: Technology side

Understanding the concept of Angular and React, now let’s compare Angular.js vs React JS from the technology aspect.


Differences Between Angular and React

Although both the frameworks utilize component-based patterns and hence, share many resemblances, they also vary in various ways.  Let’s take a closer look at React vs Angular.

Simple. Talk to us and develop a rich, attractive UI-UX design that grabs your user’s attention. Let’s start designing with React.

React vs Angular: How to Decide Which One is Best?

React or Angular?  Which is the best one to employ for attaining a robust development?  To answer this, let’s view their compatibility with various development projects.

React is utilized to build cross-platform and single-page applications with much ease. Our team of web developers also prefer Reactjs for building custom web development solutions when facing short deadlines. The framework lets React developers create lightweight applications with responsive designs and intuitive features in a short span of time.

React presents a plethora of benefits, out of which, one of them is the accessibility of tools that can be utilized to personalize your web page easily.

React is well-suited for your development project when:

Angular is a scalable and reliable framework. As an Angular software development company, we use the framework for building a large-scale app that is full of unique features.

The utilization of the Angular framework makes the development of real-time message applications easy.  Also, the teams that are well-versed in Typescript find Angular easier to employ.

The Angular framework is a good choice for your development project when:

Why is React more popular than Angular?

React has a varied and effervescent environment that offers developers the flexibility to produce the applications. Additionally, the one-way data binding feature makes it easier for testing and debugging. The simplicity, flexibility, development speed, performance and stability to develop a highly customized app make it more popular than the Angular framework.

What is the difference between Angular and React?

From Angular vs React, we can ascertain several differences. For instance, React functions with one-way data binding, while Angular runs utilizing two-way data binding. Similarly, Angular utilizes the original DOM tree, whereas React depends upon the virtual DOM. While Angular is a robust framework with a lot of extensive tools, React is a more lightweight JavaScript library.

Is React the best framework?

The answer to this question relies completely upon what your app requirements are. That states that React is an apt framework to employ when you want to create an extremely customized app exercising variable states – active or inactive navigation items, buttons enabled or disabled, dynamic inputs, a user log in, and access permissions.

What is more popular: Angular or React?

It is difficult to say or select between React and Angular. Talking about React, it has more searches, whereas, Angular is extremely considered by the developers due to the obtainability of ready-made solutions – stating that both the technologies are popular in the market.

Is Angular dying because of React?

Angular is not dying in terms of popularity instead the consideration has just been averted. Although React might be taking up more of the demand and development environment, Angular is still being steady regardless of the rising fame of React.

Amongst so many frameworks to opt from, each one has its own uniqueness, and deciding to employ the right framework may seem a tough task.  From Angular vs React, we can gauge that the developers who have knowledge of statically typed languages usually prefer Angular framework, as Typescript permits you to have an explicit type in your code.

However, it is vital to consider that React is easy to learn, which leads to faster development, while Angular has more inbuilt functionalities.  Both technologies are very influential in enhancing and speeding up the development process.  Contact Monocubed, if you require a boost in developing your web or mobile application with one of these technologies.