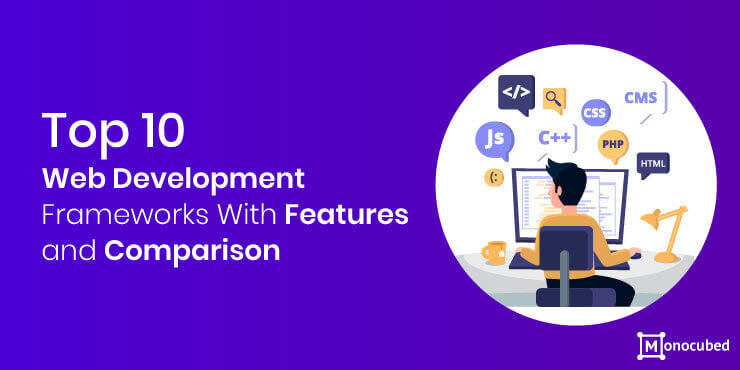 Wondering which are the best web frameworks to use in 2021? Should you use the most popular framework? Or the fastest? Or the smallest?

If you are plagued by such questions, this blog is for you.

We understand how tough it is to choose a web development framework for a project. After all, the wrong framework can slow down your website, take up too many resources and affect your sales significantly.

Without wasting time, let’s look at a quick comparison table of the 10 top web development frameworks of 2021. To make things simpler we have divided the top 10 into-

The table lists the pros and cons of the top 5 backend or server-side web development frameworks. These are used for developing the business logic of web applications.

The following table depicts a detailed front-end web development framework comparison that can be explained d by considering their pros and cons. These frameworks are used for developing a rich user interface.

Now we will look at each of these frameworks in detail, closely looking at their features and when you should use them. But first, let’s have a brief look at what a web framework is and what is meant by backend and frontend frameworks.

What is a Web Framework?

A web development framework or web application framework is a software tool that is designed to build and run websites and web applications along with web services, web servers, web sources, web portals, and web APIs.

But why should you use a web framework?

There are many advantages of using web development frameworks –

What Are The Different Types of Web Development Frameworks?

Now, there are various forms of web frameworks and models available in the market for both static and dynamic web applications and websites.

Depending on your business requirements and goals, you can take the decision of choosing which type of framework is suitable from the below-mentioned example for your web application development.

There are two kinds of web frameworks:

What is Backend Framework?

Server-side or Backend frameworks are for the backend development of websites and web applications. They control the database, the application logic, the payment methods, the security and server configurations.

With the backend framework rules and simple architecture, a developer’s productivity can be increased as they can create a simple web page, landings, and different forms of databases with existing templates.

In fact, developers and contributors can also shape the output results and help them improve the security mistakes occurring due to cross-site scripting in web development.

Form validation is also a beneficial functionality provided by server-side web framework for people requiring the user to input data structures that are estimated to meet definite necessities.

After all, to develop web applications to have an interactive interface, everyone will require a wider functionality and event handling.

In other words, all kinds of elements can definitely help you and developers simplify the process.  Server-side development frameworks work mostly individually but play an important role in application growth.

What is Frontend Framework?

Frontend development focuses on the creation of an enriching user experience. The frontend web framework enables the manipulation of the look and feel of your website to specifically cater to the preferences of your viewers.

Contrasting to the backend, client-side frameworks only work inside the web browser. Thus, it allows the improvements of the website and the implementation of new web and user interfaces.

In fact, with such front-end web app frameworks, developers can create various animated features for single-page web applications. Adding creative graphics and creating a brand for your company.

Since frontend tools mainly work with the browsers, managing server requests, building a user interface, and handling thousands of user requests are the basic requirements from a front-end framework.

Each front-end frameworks have different deployment and links. While some are just libraries of UI components, others come equipped with form validations, database manipulations and interactions with the backend for a more complete approach to web page development.

Things to Check Before Choosing a Web Framework

The intent to choose the right framework for web development will depend on many different factors and ideas that you need to consider before moving ahead and investing the cost required.

To save your time and effort below is the criteria that you need to consider before selecting an ideal web development framework for your upcoming activities involved in the project:

What are the frameworks in web application development?

The framework for developing web apps has a software bundle or tool that is designed to help the procedure of web apps such as web services, web resources, webpages, browsers, and web APIs. Developers’ teams use top website development frameworks and models to provide a convenient manner to develop and deploy web applications on the internet.

What are the kinds of web frameworks?

Which is the best web application framework for web design?

Every framework has its uniqueness that is why developers use it. In this situation, telling which is the best framework for web development of websites among various frameworks and models is very difficult. Defining the best development framework completely depends on your enterprise requirement and the project needs.

As we have discussed, the frontend and backend web development frameworks act as an important element in developing websites and web applications and there are some of the most popular web frameworks that you can choose for your upcoming project.

No doubt the selection of the best web development framework for a website must be based on the details of a specific project. Every enterprise and every person thinking about a web application framework may hold different influences.

If you are unsure where to start or are stuck in the middle procedure, Monocubed, a professional web application development company can help you and your team with your web projects.