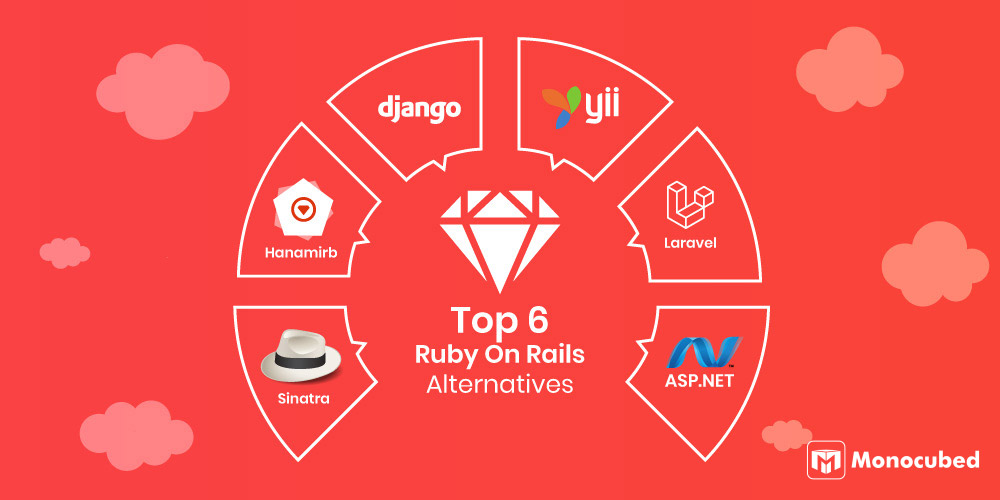 Web development would not be the same without the existence of Ruby on Rails. The Rails framework has stayed at the top for a long time in the ever-changing realm of web frameworks.

But everything comes with its own set of limitations. So, we present to you some of the best Ruby on Rails alternatives.

Now, there is nothing wrong with Rails. But with new technology comes exciting new frameworks that surpass all expectations.

Frameworks like Hanami, Django, and Ruby on Rails have changed the way developers work. Elegant coding, reduced development time, and over-the-top plugins are some innovative features introduced in them.

We present to you some of our best recommendations of alternate Ruby on Rails frameworks you can explore.

What is Ruby On Rails?

Ruby on Rails (RoR) is an open-source web development framework based on the Ruby programming language.

Many people generally get confused between Ruby and Ruby on Rails. RoR is a server-side framework for developing websites and web applications using Ruby, a high-level programming language.

Developed in 2004, RoR functions on the MVC (model-view-controller) architecture. It is an interpreted scripting language that provides built-in functions and libraries to make working with Ruby easier.

It is used extensively for server side development of web applications, web pages, and databases. RoR is often combined with major frontend frameworks such as React or Angular for full-stack web development. Developing MVPs, eCommerce apps, enterprise solutions and more, we provide dedicated Ruby on Rails web development services.

Ruby on Rails employs these software development practices making it an ideal choice for an adaptable coding environment.

Let’s discuss some aspects of Ruby on Rails that make it a widely sought-after web framework even after all this time.

Although Ruby on Rails is one of the most famous Ruby-based web application frameworks for server side development, it also comes with its fair share of problems and limitations.

Let’s look at some of the disadvantages of using Ruby on Rails as a framework.

Although RoR has many exceptional functionalities, it is not an ideal choice in all cases.

If you are working on a smaller scale and not battling with strict deadlines, you should use one of the below-mentioned alternatives to Ruby on Rails.

With such extraordinary technological growth in recent years, it is easy to find a lot of frameworks that act as an alternative to Ruby on Rails. Here, we have created a list of some alternative frameworks that you can use for developing backend applications.

Many of the mentioned frameworks are based on other high-level programming languages like PHP, JavaScript, and Python that are popular for server side development.

So, you can also explore some of these alternatives to Ruby programming language as well as the Ruby on Rails framework.

Hanami is the closest to Rails in terms of working and is considered to be an improved version of RoR. If you want something like Rails in terms of functionalities and performance but more lightweight and scalable, you should use Hanami.

Sinatra, on the other hand, is a minor version of Rails. If you want to create simple and small applications without the need for fancy features and designs, we would recommend Sinatra.

Django is to Python what Ruby on Rails is to Ruby. If you are looking for an alternative of Ruby, maybe something that works cross-platform, and enables full-stack web development, Python is a good option. If you decide on Python, Django is your go-to framework as it won’t require frontend frameworks.

Finally, if you decide to use PHP language, you should opt for either Laravel or Yii. If you are developing large-scale heavy applications, you should use Yii because of its intuitive tools and MVC design architecture. For smaller-scale applications or websites that require the handling of vast datasets, we would suggest Laravel as a Rails alternative.

Yes. Although there has been a decline in RoR developers over the past few years, it is still one of the top web development frameworks. If you are using Ruby, RoR is a framework you will have to use regardless of the alternative frameworks available. Check out our blog, Why Ruby On Rails is the Best Choice, for a more detailed analysis.

Is Ruby better than PHP and Python?

All three are equally good high-level programming languages. If you want to build robust business and E-commerce apps, we would suggest using Ruby. Python will support you every step of the way when you are developing complex web apps. PHP is recommended when designing server-side applications and content management systems (CMS).

We have discussed some alternative choices to Ruby on Rails in this blog. All types of frameworks have their own pros and cons, including Ruby on Rails.

While RoR can be great at developing backend applications that are robust and performative, Hanami would be better for a more lightweight app, and Sinatra would be ideal for small-scale websites.

Your web framework choice depends mainly on the-

It is a lengthy but essential process as it defines your product in the long term.

We, at Monocubed, can assist you in finding your ideal framework for your project. Our team of Rails developers are here to serve you with the most suitable solution. You can contact us for any web development-related queries.