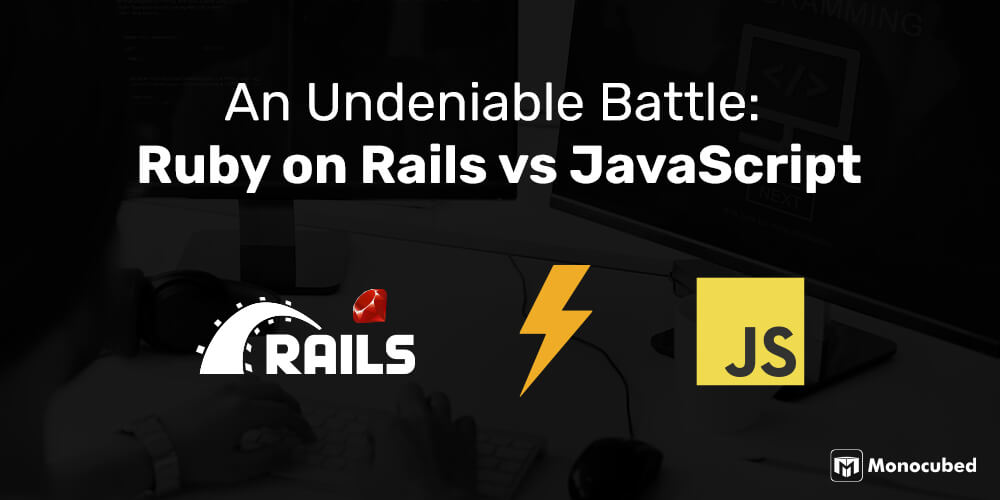 Since the last 10 years, businesses have been investing a lot in the technologies and they are getting lots of advantages from those technologies, according to Digital Intelligence Briefing: 2018 Digital Trends, “73% believe that their companies are combining their digital marketing skills with technology”. Such a trend will continue in the future as well or even in the following decade.

Keeping these things in mind, enterprises should focus on web application development more. But how to start the development process? Which technologies to use? To help you we have taken two leading web technologies – Ruby on Rails vs JavaScript– and will compare them.

Lets look at Ruby on Rails and JavaScript comparison, understanding their usage, their features and examples. Should businesses use JavaScript or Ruby on Rails? Let us see which one is most suitable for you.

Ruby on Rails (RoR) is a framework written in Ruby language for the server-side development of web and desktop applications. A programmer can use Ruby framework as it is a kind of skeleton for website development which provides some basic structure and optional features that can be inserted in and out. Yukihiro Matsumoto, chief designer of Ruby, is an open-source, object-oriented code base language.

And instead of writing out SQL code, Rails is simply created using Ruby that will help you save a lot of typing. This can be clearly ascertained from one of our previous articles, ‘Understanding The Top 7 Difference Between Ruby and Ruby on Rails‘.

RoR follows the MVC (Model View Controller) style of framework where the models store the information, the view shows it and the controller works as a middleman and controls them. Rails runtime environment is a closed arrangement made of Ruby interpreter and various scripts, libraries, and helper programs.

The Ruby on Rails framework is specially designed to be modified according to the user’s specific requirements and with a focus on portability, extensibility, simplicity, and productivity. Ruby on Rails framework also comes with Gems which are libraries and modules of Ruby programs that are designed into a standard format for installation so that they are used as plug and play.

Is Ruby on Rails Dying?

RoR brought innovative approaches and best practices to the process of developing web pages. It has become one of the few web app frameworks that work based on a developer-first approach. Programmers’ community believe that the design of this framework is unique and promotes convention over configuration.

As a Ruby on Rails development company in USA, we find Rails to be the perfect framework for large-scale web app development. RoR is highly flexible, comes along with a high development speed, provides database migration, and a well-organized content management system that helps them complete the project effortlessly.

On top of all the causes, Rails is available for free of cost as it is open source. Below are the points that suffice the most prevalent question, ‘Is Ruby on Rails dying?’:

Why is Ruby on Rails in Demand?

In recent times, although Ruby on Rails programming is losing its popularity due to the competitive options available, Rails is still in the market for more than 15 years due to the following reasons:

JavaScript, created by Brendan Eich, is an object-oriented coding language that helps a number of JS developers to design dynamic HTML pages along with interactive effects for the website that engage a user. JavaScript also allows a full stack developer to add complex functionality and enable them to work together with other programming languages.

Not only this, but such scripting languages also enable them to access animated graphics, photo slideshows, interactive forms, and auto-complete text suggestions aspects. Some of the common examples of JavaScript you might be using are Google’s search results, faster loading Facebook pages and many more.

Why is JavaScript in Demand?

JavaScript is basically used for web-based applications and web browsers. But it is also used for web server, software, and embedded hardware controls and has a fairly moderate learning curve. Many fortune 500 corporations are using Java Script for their front end website development. Another reason is JavaScript is also constantly rated as one of the top programming languages, the sixth year in a row by StackOverflow survey results.

Ruby on Rails vs JavaScript – 5 Key Differences to Know

When it comes to comparing and finding the difference between Ruby on Rails and JavaScript, both of them have a dynamic type system and also have automatic memory management which makes them demanding amongst the engineering team. The similarity is both languages were born around the same time around 1995 and that is where they get started to part their ways. RoR is a one-stop solution for large web applications and Java Script works perfectly for the microservices.

Considering the learning curve in Ruby vs JavaScript, the former has numerous computing resources for learning from online forums, sources, and communities by which you can learn by yourself. JavaScript has wide-ranging documentation, online forums, communities, modules, and sources, that makes it easy to learn. Here is the detailed comparison between Ruby on Rails and JavaScript.

JavaScript vs Ruby on Rails – Which is better?

Both of them have their own unique personality when you compare each programming language. Each of them offers a variety of attributes, and benefits and drawbacks. The web servers that are supported by CGI, Rails are designed to run on them. For frameworks like MySQL, SQL Server, PostgreSQL, Oracle, and DB2, RoR programming is adopted.

Eventually, both have their own audience, and depending upon the requirements and business model, companies and startups can choose the languages, tools, and technologies that are best suitable for their needs. But, based on the characteristics that Rails and JavaScript offer, we can say that both are equally qualified to win the battle.

The community of Ruby on Rails programmers performing Ruby on Rails needs less time as compared to the rest of the frameworks for programming an application. Apparently, it proves to be a notable advantage for start-ups. Also, if there is a necessity to deliver solutions backed by proof within a limited time, then RoR app works as the best prototyping means. Furthermore, being an open-source, it is an ideal option for cost-saving in any start-up.

Despite the myth that Ruby on Rails is dead, the survey mentioned here justifies that it is one among the most demanded programming languages. Also, it has a wide potential market share for RoR programmers’ community.

JavaScript is ideal for frontend or backend?

JavaScript is considered a frontend and backend technology both. It is used across all the development stack and file structure. JavaScript enables you to do a lot of back-end things, including all advantages and disadvantages. If you are looking for front-end and considering JavaScript it gives outstanding features for front-end development.

Are Ruby and Javascript similar?

Ruby and JavaScript seem to be similar because they both are dynamic and general-purpose languages. But Ruby, an OOP programming language, is generally utilized for server-side app development. Whereas, JavaScript, also an object based language, is ideally employed for client-side web applications. It is weakly-typed and Ruby is duck-typed. JavaScript tends to be faster than Ruby, having larger communities.

From the above section JavaScript vs Ruby on Rails, we can gauge RoR uses a full stack web framework that is basically used for back-end development. On the other hand, JavaScript is a client-side scripting language that is used for front end development. When you keep the above given details in mind, you will find that these two demanding languages are not competing with each other at all.

In fact, the developers believe that both the language has its own distinct pros and cons that businesses can choose to adopt or reject for their application development. No doubt, you will need a command of the front-end and back end to build rapid application development. We at Monocubed have versatile web developers for both RoR and JavaScript, who will help you convert your idea into a dynamic reality.