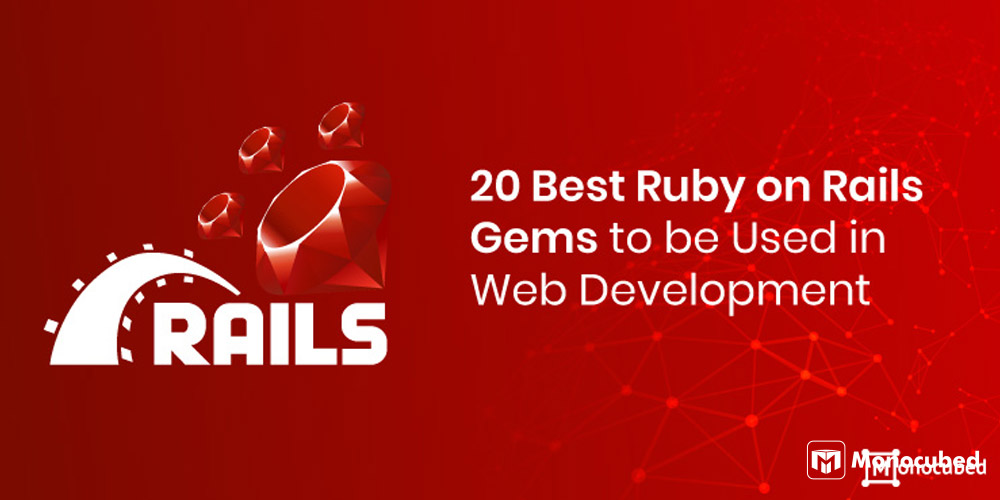 Ruby on Rails is an outstanding framework for developing web applications with influential features that aid to increase the speed of your web app development utilizing an MVC pattern.

It is intended in such a manner that it can be simply prolonged employing the most popular Ruby gems presented by the Rails community.

Ruby on Rails is valued for its manifold ready-made solutions that facilitate rapid software development.Such speed is primarily obtained through utilizing Ruby on Rails gems – libraries with explicit functionalities that permit you to prolong and customize your Rails application.

In Rails, there are gems for every purpose, from authorization and authentication to testing and payment processing.

Let’s understand the Ruby on Rails concept and its feature-rich gems.

Ruby on Rails at a Glance

Ruby on Rails (RoR) is a server-side application framework that is written in Ruby under MIT License.

Rails is a model-view-controller (MVC) framework that provides default arrangements for a web service, database, and web service. It reassures and simplifies the usage of web standards, such as XML or JSON for the data transfer and CSS, JavaScript, and HTML for user interfacing.

In addition to the MVC pattern, Rails accentuates the employment of other popular software engineering designs and paradigms, comprising active record pattern, don’t repeat yourself (DRY), and convention over configuration (CoC).

Some of the popular companies that use Ruby on Rails are –

Important Features of Ruby on Rails

Rails is opinionated software.It makes the notion that there is a better method to do things, and it is intended to encourage that technique and in certain cases to discourage options.

If you understand ‘The Rails Way’, you will increase your productivity.

If you continue to bring old behaviours from other languages to your Rails project development and strive to utilize designs you have learned somewhere else, you may get fewer contented experiences.

Therefore it is advised to develop websites with experienced developers. If you have a web app idea, it is best to outsource Ruby on Rails development to a RoR development company like us.

What Are Gems in Ruby on Rails?

Many of the programming languages like HTML, JavaScript, SQL, and CSS do not cover both backend and frontend.

Nevertheless, RoR language allows full-stack web application development and permits the developers to develop custom Rails apps. This makes Rails one of the most popular web frameworks as it has transformed the web development ecosphere through its practical method.

With Rails, every function, which you need for web app development can be found at your fingertips. You can excerpt what you need to continue ahead.

RubyGems is a package administrator for Ruby programming language that facilitates a standard arrangement for allocating Ruby libraries and programs in a self-sufficient format known as a ‘gem’, a tool intended to simply administer the installation of Ruby gems, and a server for dispensing them.

For Ruby on Rails gems, an interface is a command-line tool termed gem which can install and administer the libraries.The gems incorporates a Ruby runtime loader to assist in finding and loading installed gems from uniform library folders.

Even though it is possible to use private RoR gems repositories, the open repository is most usually employed for gem management. The public repository aids the users to find Ruby gems, resolve the dependencies, and set up them.

A Ruby gem is bundled with a standard Ruby package as Ruby 1.9.

Deadlines are tough. But using Rails Gems, you can develop a feature-rich web app within no time.

We have curated a list of the most popular Rails gems for simplifying the development of custom Rails web applications. The 20 top RoR gems are –

This was our collection of the 20 best Ruby Gems for developing a full-stack web application or website using Ruby on Rails. For more such best Rails gems, check out the official Ruby gem repository.

What are gems in Ruby on Rails?

Ruby Gems is known as the package administrator for Ruby language that presents a classic format for dispensing Ruby libraries and programs. It distributes in an independent format termed as a ‘gem’, a tool that is designed to manage the fitting of gems and a server for allotting them. The interface for Ruby Gems is the command-line tool named gem which can set up and administer the libraries.

How does Ruby gem work?

Ruby Gems software permits you to download, install, and employ Ruby software packages on your scheme easily. Here, the software package is known as ‘gem’ which comprises a packaged Ruby application or library. Some of the gems deliver command-line efficacies to aid automate errands and speed-up the work.

Rails is an app development tool that renders the web developers a framework and provides a pattern for all the coding they do. The RoR framework aids developers to develop applications and websites, as it abstracts and streamlines the common repetitive errands.

The above-mentioned gems are effective enough to resolve any common issue in Rails app development.These can effortlessly solve the issues related to uploads, file testing, authentication, and authorization.

Moreover, these gems eradicate the requirement to redevelop the wheel for every app.

Nevertheless, the gems would not solve all of your application development complications. When you hire a dedicated ROR developer, he or she will need to work on them a little to build custom RoR web applications.

Monocubed being a custom website development company has experienced developers who are proficient with Ruby on Rails development. Contact us to get a free consultation with our RoR expert and discuss your web app idea with us.