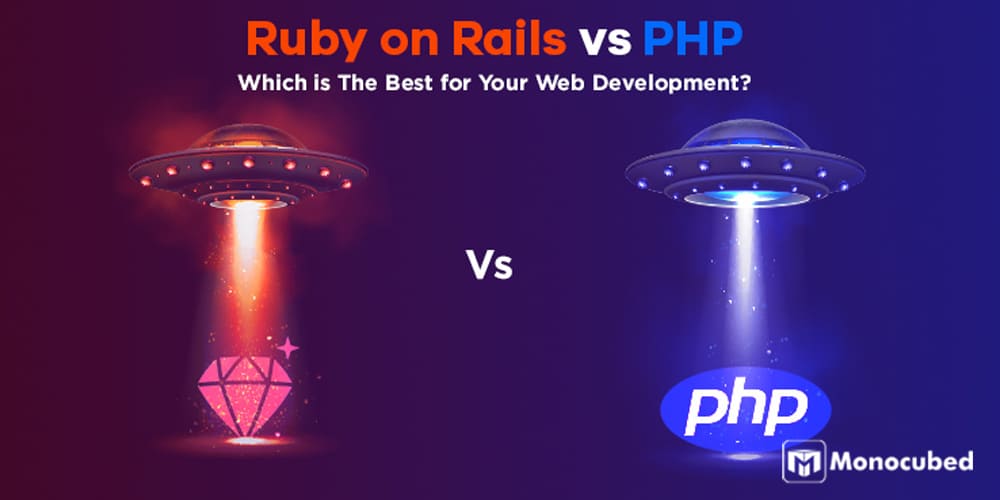 There are numerous existing programming languages and with each passing year, new ones are created for efficient web application development. It becomes difficult to select one language that fulfills your development requirements. According to w3techs survey, PHP and Ruby on Rails fall under the category of the most popular server-side programming languages.

For custom development, a detailed analysis of Ruby on Rails vs PHP would be helpful to build a robust site.

Ruby on Rails contains a scripting language, Ruby, and a web framework, Rails; whereas, PHP is a scripting language. In the 1990s, these two languages were introduced in the web development sphere. With the changing time and need, these technologies have upgraded and their latest versions consist of better functionalities and features.

Both the techniques have been influential in providing various remarkable solutions since their inception. Let us get some insights into their concepts and differences between PHP and Ruby on Rails.

Why Use Ruby on Rails?

Before we understand Rails, let us understand a few key aspects of Ruby. Ruby is a high-level, interpreted programming language that was envisaged in 1993 by Yukihiro ‘Matz’ Matsumoto in Japan. In Ruby vs Ruby on Rails, Ruby tends to follow the Principle of Least Astonishment (POLA), minimizing the bewilderment for qualified users. It is meticulously object-oriented with inheritance, metaclasses, and mixins.

Ruby is vigorously typed and supports manifold programming concepts like functional, procedural, and object-oriented programming. It consists of vibrant alteration and reflection of objects to assist metaprogramming. According to the inventor, Matz, Ruby took influence from Basic, Smalltalk, Lisp, Eiffel, and Perl.

Rails or Ruby on Rails, or Rails, is a web app framework scripted in Ruby and is MIT licensed. It was invented by David Heinemeier Hansson and first released it as open-source in 2004. It works under model-view-controller (MVC) architecture and default structure for web service, web page, and database.

It supports the utilization of web standards like XML or JSON for the data transfer; and CSS, HTML, and JavaScript for the user interfacing.

Ruby on Rails framework also emphasizes the usage of other in-demand software engineering paradigms and patterns, namely, don’t repeat yourself (DRY), convention over configuration (CoC), and the active record pattern.

The vital difference between ruby and ruby on rails you must know about is that Ruby is not a framework, but an all-purpose programming language, while Ruby on Rails is a web development framework programmed in Ruby language.

Reasons Stating What is Ruby on Rails Used for:

Rails has a huge ecosystem, rendering tools, and support you need to develop web applications. The procedure of its programming is faster than the rest of frameworks, because of its object-oriented trait and its huge collection of open-source code accessible in the Rails community.

To answer the widely asked question, ‘What is Ruby on Rails used for?’, we have explained the following reasons:

PHP is a scripting language that is best suited for web app development. This general-purpose language was designed by Rasmus Lerdorf in 1994. The coding is generally processed on the web servers by a PHP interpreter and it is implemented as daemon or module, or as Common Gateway Interface (CGI) executable. The outcome of interpreted and executed codes on a server would create a complete or a part of HTTP reaction.

A variety of web content management systems, template systems, and frameworks are supplied which can be exercised to coordinate or ease the production of that reply. Subjective codes of PHP can be interpreted and executed by means of command-line interface (CLI).

PHP contains diverse open-source and free libraries in its source division or utilizes them inconsequential PHP binary build. Also, PHP would prove to be effective in robotic drone control and graphical applications.

Reasons Stating What is PHP Used for:

Considering these aspects, PHP is used for the following reasons:

Let’s talk. We have experience in developing custom web solutions using PHP. Book a free consultation with us.

Ruby on Rails vs PHP: The 8 Major Differences

Ruby on Rails, written in Ruby language, is a web framework; whereas PHP is a server side scripting language. Both these technologies are open-source, which suggests that there is no licensing fee. Due to more deployments, PHP has a wider developer’s community, while Rails community is very enthusiastic and skilled, which supplies a mounting library ready to employ Ruby gems.

Through PHP vs Ruby on Rails, let us examine the essential differences between them.

When to Use Ruby on Rails?

Ruby on Rails development is a stable and mature technology that supports more complicated solutions. RoR development companies benefit from the web framework by digitizing and enhancing business practices with new and greater possibilities.

You may select Python when you have to execute data processing and computing. And if you are willing to gain huge traffic on your web app, you can opt for Rails. This was depicted from our previous blog Python vs Ruby on Rails.

Additionally, Rails contains everything that is required to build database-driven web applications by employing MVC patterns. Though there are plenty of new frameworks available, the popularity of Ruby on Rails is still at its peak. This can be validated from its ever-growing Rails community and its constant implication by big giants like Shopify, Github, Airbnb, GroupOn, Hulu, to name a few.

This suffices the question, ‘Is Ruby on rails dying?’ There is a high possibility that owing to its incessant evolution, it is proposed to be a mature framework that is forming its niche.

When to Use PHP?

PHP is one of the most prevalent and interpreted languages, which states that it does not require any compilation. If you want something very simple and easy to employ, PHP is a great choice and quicker than other languages. PHP facilitates the usage of different variables without stating its data type.

So, this is taken into account at the time of execution, relying on the value assigned to that variable. Moreover, this variable name can be modified dynamically.

PHP renders flexibility and has an embedded trait to integrate with XML, Javascript, HTML, and more. From Ruby vs PHP, we gauged that a PHP web developer can function on various operating systems like Unix, Windows, Mac Linux, MacOS. PHP scripts can simply be executed on devices like mobiles, laptops, computers, and tablets and it can effectively be integrated with different databases.

Ruby on Rails or PHP: Which is better?

PHP has a powerful background that functions well to connect the websites with databases. From Ruby on Rails vs PHP, it becomes clear that to produce astounding user experience, Ruby on Rails is preferred. As Rails is a contemporary technology that contains UX principles, it renders more polished websites.

With Convention over configuration and DRY principle, Rails enables its developers to code efficiently and minimizes their time to configure; unlike PHP which offers no such tools to speed up configuration.

Is Ruby similar to the PHP language?

PHP was developed to construct HTML with active pieces and Ruby is a better-designed programming language. Ruby can be used everywhere and not only in the environment of web pages.

If you plan to build any web page, you can perform the same things by utilizing Ruby as you can perform by incorporating PHP. They both will simply produce an HTML output just like any other server-side language.

Is Python faster than Rails?

PHP stable release 7.4.8 has many inbuilt development capacities and is configured to perform better without consuming much of the memory. Despite this, PHP frameworks can still fluctuate in their actual performance. On the contrary, Rails is better at speeding up, owing to its capability of executing requests every second. But this consumes a huge amount of memory and its developers have to reimburse by altering the runtime.

If we talk about a complete object-oriented language, Ruby on Rails is usually preferred. While PHP is an open-source and widely accepted programming language. It consists of many robust frameworks and its stable release 7.4.8 is enormously fast.

Contact us, if you want to know whether PHP or Ruby on Rails would be an apt technology for your business, and employ its exceptional functionalities. Hire ruby on rails web developer from Monocubed to build robust web applications by incorporating the peculiarities possessed in the technology.

Both Ruby on Rails and PHP have the capacity to scale. The gem libraries of Rails make it much easier for Rails developers to build any project by using gems from its libraries. Rails is one of the most popular web frameworks for web app development as it is used to build an app that is ten times quicker than a standard Java framework.

On the other hand, PHP renders affordable solutions, owing to its diverse set of tools offered. This Ruby on Rails vs PHP comparison depicts an analytical picture that would aid you in selecting the best technology for your dynamic web application development.