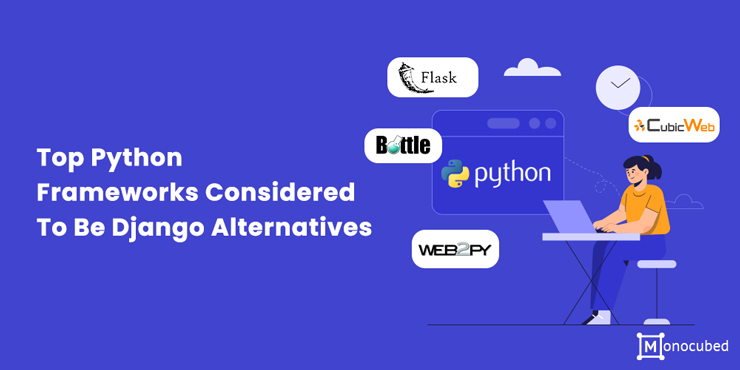 Web frameworks are an essential aspect of developing user-driven web apps. They provide structure to web applications, increasing the productivity and efficiency of developers.But new development trends have resulted in a massive number of innovative frameworks and tools. Keeping track of new tech can become cumbersome.

One such popular web framework to use is Django. It has been steadily increasing in popularity since its release and still continues to be a favorite among Python developers.

However powerful it is, Django can not suit every web project. It can get slow, restrictive, and monolithic for small-scale projects. It becomes necessary to look at alternative frameworks in such cases.

Django is a high-level, open-source web framework that encourages rapid development. Used in web development of Python programming language, it ensures the implementation of a clean pragmatic application design.

Django comes with most of the common libraries and tools required for web development and is therefore called a batteries-included framework. It requires no additional installation.

The Django web framework offers a complete suite of features such as data binding, boilerplate coding, flexibility, reusability, high productivity, and extensibility. You have access to a standardized frame that takes care of the hassle of web development, so you don’t have to reinvent the wheel.

Some positives of using Django are its MVC-MVT design architecture and the powerful components-based framework. Another point of importance is that Django includes all the functionalities to secure websites and helps developers avoid web security mistakes.

These are some of the most important benefits of Django. Other advantages of the web framework are-

Why Look For Django Alternatives?

Although Django is one of the most popular Python frameworks, it also has its own pitfalls and drawbacks. Its size and monolithic structure can prove to be a hassle when working on a simple single-page web app. Some cons of using Django as a framework are –

Check out the detailed comparison between Django and Node.js, to find which one is best to utilize.

Django is a full-stack framework for the Python programming language. As discussed, although it has many advantages, there are also some drawbacks of using Django that can averse a developer from using it.

There are mainly two types of frameworks – Full-stalk and microframework. Let’s look at some alternative frameworks of both types which you can use instead of Django.

Full-stack frameworks such as Django, come pre-equipped with all the functionalities for developing an interactive web application. They include server configurations, business logic components, testing and debugging features, security protocols, and deployment settings.

Django, as discussed, can sometimes be monolithic. Other full stack frameworks can also be too complex for small, basic websites and applications that do not require a lot of features. Python has a series of well-designed micro frameworks such as Flask, Bottle and CherryPy that work perfectly with small-scale websites.

Some advantages of using micro-frameworks are –

For smaller, lightweight alternatives of Django, you can consider one of the following server-side Python frameworks –

Some Other Alternatives for Django Framework

If you are willing to experiment with other programming languages, we have a list of the best frameworks for different web scripting languages such as PHP, JavaScript, Go, and Ruby.

All the above frameworks are exceptionally good for server-side development. While the PHP framework CodeIgniter is well suited for eCommerce projects, Ruby-based, Ruby on Rails is best for start-ups. We have answered some common questions in the FAQ section. Feel free to contact us anytime, if you have any queries or a web idea we can help you bring to fruition.

Django is a robust Python framework that has been used by web developers for years. There is no sign of decreasing popularity for Django. It is a mature framework that continues to grow with third-party ecosystems and tools. With each new update, Django receives advanced features. It is definitely worth using for large-scale web applications.

Is Django better than Rails?

In terms of scalability, ease of use, and security Django fares much better than Ruby on Rails. With readable syntax, pragmatic design, and extensive core libraries, Django is definitely better for case-specific personalized web apps. But if you compare speed and performance, Ruby on Rails is faster than Django.

No. Flask and Django are two competent Python frameworks that have a widely different development approach. Flask cannot replace Django as it is meant to be a microframework that offers components and scales with your needs. Django, on the other hand, is a complex ‘batteries-included’ full-stack framework.

Django is one of the best web frameworks for developing scalable complex applications. But there are many times when Django fails. You can use alternatives to Django such as Flask, CherryPy, TurboGears in such cases. These are more productive web frameworks that can be used for a more performative and flexible website.

Node.JS, Laravel, React are some non-Python frameworks that are also good alternatives for Django if you are comfortable with other programming languages.

Still unsure which framework to choose? Contact our IT experts for assistance in choosing a Django alternative. If you have some projects in mind, our developers can also help you develop suitable web solutions.