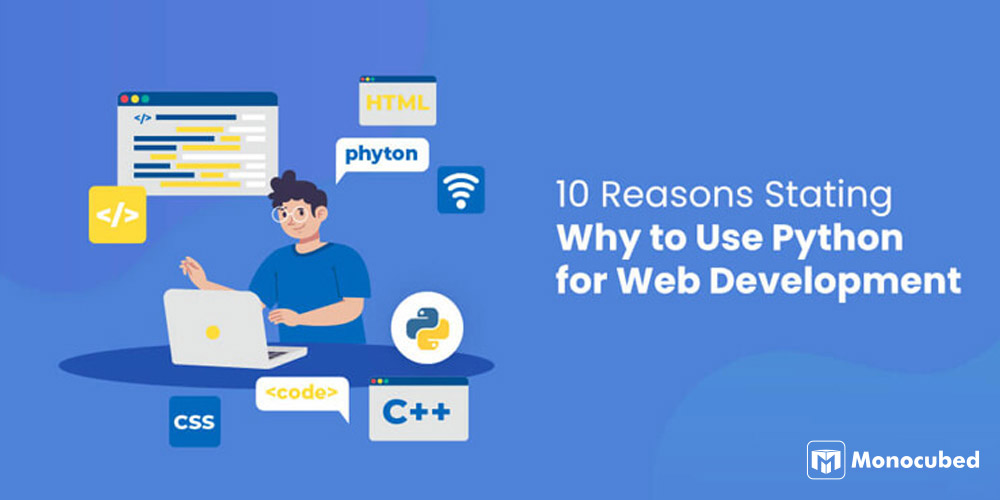 Python, being a high-level language, permits you to emphasize the app’s main functionalities by taking into account general programming tasks. Several reasons are stating ‘why use Python’ for developing software apps, the shells of operating systems, and pages within a web browser.

The modest syntax guidelines of the Python programming language make it extremely easy to keep the code database readable and app maintainable. Let’s understand the concept of Python and various companies implementing it for their web development.

Python at A Glance

Its object-oriented approach assists programmers in writing logical and clear code for minor and major projects. Spotify, Dropbox are some popular web apps made with Python.

Guido van Rossum initiated functioning on Python language in the late 1980s, as a descendant of the ABC language, and released it in 1991 as Python 0.9.0. Python is garbage-collected and dynamically typed.

It facilitates manifold programming paradigms, comprising functional and structured (chiefly procedural) programming. It has fewer syntactic structures than the rest of the languages. It is often defined as a ‘batteries included’ programming language owing to its wide-ranging standard library.

The latest version, Python 3.9.4, furnishes installers and source code that are accessible to download.

Python employs a grouping of a cycle-detecting garbage collector and reference counting for memory management and dynamic typing. It features vibrant name resolution, which binds variable names and methods during program implementation. The features of Python are as follows:

Talk to us. Start developing a lightning-quick web app for your business that is scalable, integrable and affordable.

Python is a high-level and general-purpose language. It can be employed to form desktop GUI applications, apps, and websites that function on refined algorithms. The most prevalent answer to the question ‘What is Python used for?’ is mentioned here. It is broadly recognized as one of the versatile programming languages that can be utilized across various projects.

It also allows you to aim at an app’s core functions instead of focusing on the insignificant details. As per Stack Overflow, the graph depicts that Python has grown in popularity when compared to Javascript or Java. The following are the reasons that will help you get apt answers to the question ‘Why utilize Python?’

Python language is specifically known for its influential web frameworks and is occupied with numerous choices apt for your project management requirements. Whether you need to build a complicated website or a simple application, with the assistance of Python frameworks, you can create an efficient and secure backend script easily. Below are the top Python frameworks that will provide high-performing web solutions in 2022:

Industries That Use Python

Python’s code base is easily readable, and the app stays maintainable altogether. It also makes it simpler to code in intricate applications utilizing extremely flexible programming language in the field of data science, AI, and IoT. GitHut, a conception of GitHub language status, pins the growth of Python. Below are some of the vital industries that utilize python for robust project development.

These days it is imperative to select the correct tools to build or rebuild your web app or website. The PopularitY of Programming Language (PYPL), founded on foremost indicators from Google Trends search keyword study, displays Python at the top.

Many companies extensively use the Python language to analyze data, automate operations via DevOps, build web apps, and create scalable and reliable enterprise apps. Below listed are the companies that use Python that have mounting popularity:

Why do we use Python?

Python is often utilized as a ‘scripting language’ for web applications. This states that it can mechanize explicit series of jobs, making it more effective. Therefore, Python language is often exercised in software apps, some games, the shells of operating schemes, and pages within a browser.

What is Python best used for?

If you require to work with any sort of data – data analysis, scraping, visualization, AI, or machine learning, Python is the best option. There are numerous significant libraries for every task, greatly used in production and research environments.

What are the benefits of Python?

The significant benefits of using Python are it has many support libraries, third-party modules, learning ease and support available, open-source and community development, high productivity and speed, and user-friendly data structures.

From this blog, we have examined the crucial reasons stating why use python for robust project development. Its coding language focuses on the excess of novel technologies while offering a standardized coding situation. Contact Monocubed to build simple and clear Python applications that function seamlessly in small and complex projects.