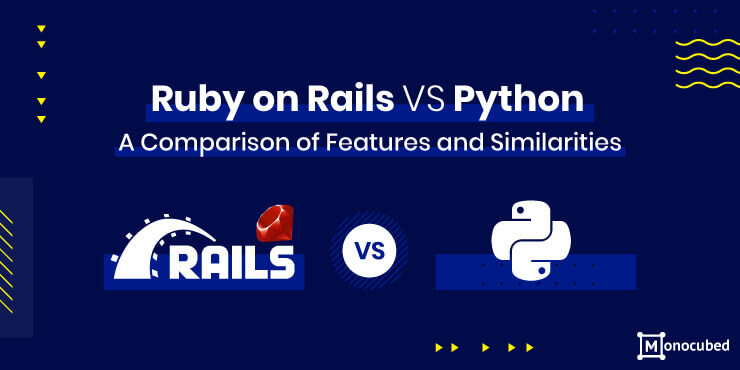 For a few years, the programming planet has evolved exceptionally. As we observe the mounting demand for getting everything digital, it has been imperative for us to understand which programming language is best suited for different kinds of needs.

While planning about your web development project, you would look for a framework that could render every tool you require.  This brings us to the most baffling question Ruby on Rails VS Python – which web framework should we opt for?

There are various similarities and dissimilarities between Ruby and Python programming languages.  These two languages are some of the best instances of high-level languages which tend to focus on simplicity and facilitating the programmer to get things done faster, instead of juggling around rigid hierarchy and syntax correctness.

Both Rails and Python can be utilized to develop sites and applications with any functionality and complexity.  To understand the analytical difference these languages possess, let us examine its vital concepts.

Ruby on Rails (RoR) is a server-side model-view-controller (MVC) framework that provides default patterns for web service, web pages, and databases.  It was invented by David Heinemeier Hansson in 2004 and leveraged web application development through its distinctive traits like the scaffolding of views, flawless database table formations, and migrations.

It is meant to uplift the application of web standards like XML or JSON for data transmission and JavaScript, CSS, and HTML for the user interface.

Ruby is a server-side and potent language that yields readable and elegant code while preserving its articulacy.  To understand what Ruby on Rails is, you must be familiar with the MVC architecture.  Along with this pattern, Rails accentuates employing other renowned software engineering paradigms which include the active record pattern, don’t repeat yourself (DRY), and convention over configuration (CoC).

Its robust framework has lots of built-in functions and libraries, making you focus on definite business requirements.  Some of the giant companies that use rails are Shopify, Github, Hulu, Airbnb, to name a few.

Many programming languages like HTML, JavaScript, SQL, and CSS do not support front-end and back-end both.  But Ruby on Rails programming comprises both ends that help developers to create web applications.  In the strife between Ruby on Rails vs Javascript, the main consideration is that Java is a compiled coding language, whereas Ruby is an interpreted scripting language.

Below listed key features suffice the prevalent question – what is Ruby on Rails used for.

Python is a high-level, all-purpose programming language. It was invented by Guido van Rossum in 1991.  Python’s philosophy lays importance on readability with its prominent utilization of vital whitespace.  It follows an object-oriented approach that aids programmers to write logical and clear code for big as well as small-scale projects.

Python is one of the mounting programming languages, owing to its wide array of usage from machine learning to data science, and also in academics.  It is vigorously typed and garbage-collected.  Many programming prototypes, including functional and structured are supported by Python.  It is usually portrayed as a ‘batteries included’ language as it has an all-inclusive library.

Python is an advanced language that facilitates the creation of both, simple and complex functionalities.  Also, it comes with an in-built wide range of modules and libraries, aiding to support various languages – C, C++, JSON, and Java.  The below-mentioned key features would suffice your question – what is Python used for and reasons to consider it for your business.