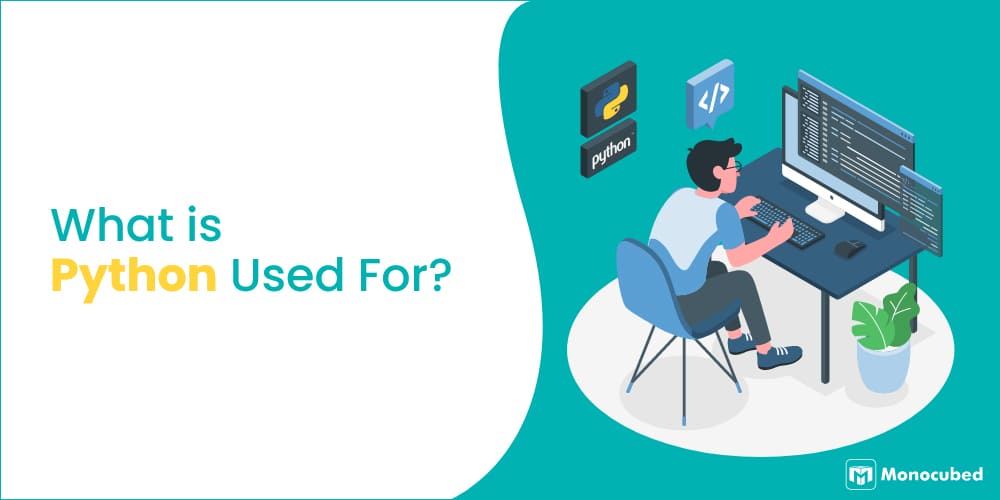 The reason we use programming languages is that they enable us to write efficient programs or products and aid us to develop robust digital solutions like web and mobile applications, gaming, and others. Enterprises practice programming to automate, support, assemble, evaluate, and interpret the data processing and information they are going to gather from the websites they have created.

Programming languages have their unique ecosystem and benefits to offer. While the web frameworks like Django, web2py, Flask, Pyramid, and Tornado aids the job of developing web applications and designing multifaceted software applications. Python is one of the easiest languages to work on.

This is so because acquiring knowledge of the coding languages in Python format is simpler, as compared to other languages. But you must be thinking what is Python used for? Well, we will cover everything that needs to be known about the impact of this language. But, before that, here is quick information for you.

When was Python created?

Python was created on 20th February 1991. Python was designed by Guido van Rossum, and developed by Python Software Foundation.

What is Python Used For? Why Was Python Developed?

Ever thought about what is Python programming language used for? Most of us know that Python is one of the best open-source, object-oriented programming languages available everywhere in the market. Python often uses English keywords, whereas other languages use punctuation. Being a Python web development company we use Python for web development projects, product development, and custom solutions for fintech organizations.

For whatever reason you are using it, it will allow you to design simple and readable code that can be used at both, frontend and backend and in all the major operating systems and platforms. Not only this, but this general-purpose language also offers a test-driven software application development choice for data science, research, data analytics, AI, and machine learning (ML) capabilities for the creation of outstanding apps.

The most popular companies that use Python are Google for its mainframe foundation, DropBox for its cloud-based services, YouTube for the integration of streaming videos into their internet pages, Twitter for posting tweets, Instagram for its Django framework, Wikipedia MoinMoin is a wiki engine, WAS for Nasa are a few examples.

If you are a beginner in the development world, you might have no idea or introduction about what is Python used for. Most of the Python implementation includes a read–eval–print loop (REPL) basics, allowing the platform to exercise as a command-line interpreter where the users enter the statement in sequence and get the results instantly.

On the other hand, if you start looking for the benefits of utilizing web and internet development Python, you will realize you have services and rules to lots of new and key elements in computers that will make your terminal development methods stronger. So, what can you use python for?

Well, this is the common query or issue people tend to seek response for. The simple answer is that there are so many things that you can develop using the Python programming language. Py4J grants Python programs that can run in a Python interpreter to access Java objects in a particular Java Virtual Machine. CoffeeScript, cross-compiles to JavaScript, and this difference is inspired by Python syntax and scripts.

So what can you do with Python?

This is the cause we see a rise in its popularity among the developers’ community, number of industry owners, students, and tech giants. Let us examine specifically what makes Python stand apart from other languages:

7 Reasons to Consider Python as your Development Language

Python is one of those hidden forces that are present in our smart devices, websites, and games presented by Guido Van Rossum in 1991. It plays a major role in our everyday life and became an important topic in the industry because it facilitates the step of creating HTML files with a Python script and various other advantages it offers to render swift performance.

Here are some of the services for which you can use this scripting language:

There are lots of advantages of employing Python as your programming language in your tech stack, and the list is as follows:

The above-mentioned points describe clearly what is python mostly used for. Software development team that utilizes Python might take only a few minutes to write code and execute the application compared to problems faced in programming languages.

Also, Python interpreters are accessible for an operating system. The first and foremost benefit of using Python is that it reduces the job time developers spend coding through a complicated language for programming during the development course.

Obviously, this is the fact that when you are writing any code for your web projects and applications, it needs high-level priorities to run a smooth and right application development process in the browser.

For that, like various scalable and fast languages, Python is useful for many real-world technologies. Plus, Python is a tool used for flexibility and freedom to develop innovation that would be more complicated, difficult, and time-consuming to achieve for other languages.

What does Python do?

Python is a high-level programming language that is designed to be simple in implementing and easy to read. It is an open-source programming language, which means programming in Python is something that is free to use. Python is used for web and app development, AI, data science, data analysis, mathematics, machine learning, creating product prototypes, and robotics, are a few examples.

What can you build with Python?

When you use Python for business app development, you can automate a specific series of tasks and make it more efficient. Consequently, Python is used to develop software products and web development, page and step within web browsers or devices, the tests of operating systems, and games and 3D games.

Is coding for Python easy to write?

Yes, writing code as well as searching an input code base in Python is easy and simple in web application development. The simplicity syntax of Python is very clean, and easy to learn as compared to other languages. Thanks to its straightforward functionalities, even beginners can start learning and coding in Python very easily from the Python tutorials. Before you start to write codes, you need to have the basic concepts clear in your mind.

As we have seen in this article, there are thousands of reasons where industries can take advantage of Python one of the major languages that are used for the development jobs of both web and desktop applications. The core focus of any startup adopting Python would be to take care of their common programming tasks.

We, at Monocubed, help you find relevant Python-based web development methods and solutions, what is Python programming, what Python is used for, why use python, top Python frameworks, and how it is helpful for your business.