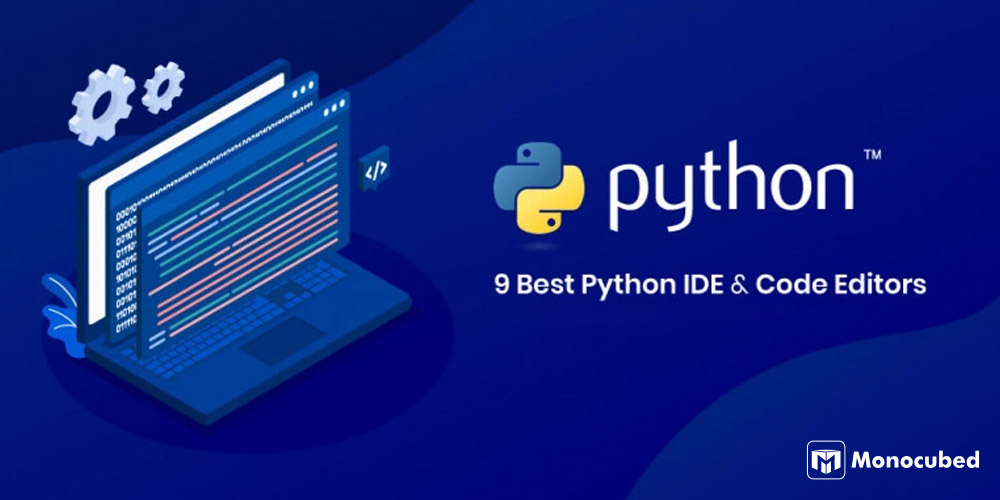 Python is one of the prominent and high-level languages that was first released in 1991. It is largely used for the development of software, server-side web development, artificial intelligence, and scripting.

It runs on manifold platforms like Mac OS, Windows, Linux, and Raspberry Pi.

The best Python IDE and code editors are intended for developers to code and debug programs effortlessly. Using such Python IDEs, you can administer a huge codebase and attain rapid deployment.

As a Python web development agency, we use varied IDEs and code editors. Here we have compiled a list of the most popular IDE for Python in 2022.

What is an Integrated Development Environment (IDE)?

An integrated development environment is a software app that offers wide-ranging services to computer programmers for any kind of software development.

Some of the IDEs, namely, Eclipse and NetBeans, have the required interpreter, compiler, or both; while others, like Lazarus and SharpDevelop, do not.

Various contemporary IDEs also have an object browser, a class browser, and a class hierarchy illustration for usage in object-based software development.

The border between an IDE and other fragments of the wider software development ecosystem is not clearly defined. At times, a version control scheme or several tools that streamline the structure of a graphical user interface (GUI) are unified.

Let’s look at one such counterpart of an IDE that is called a code editor.

What is a Code Editor?

A code editor is a text editor software package intended explicitly for editing the source code of computer programs. A dedicated code editor may be built into an IDE or maybe a standalone application or web browser.

These code editors are a vital programming tool, as the chief task of software programmers is to write and edit program codes.

Source-code editors have characteristics specially planned to streamline and speed up the typing of source codes, like indentation, autocomplete, syntax highlighting, and brace matching functionality.

Such editors also render a suitable way to run an interpreter, debugger, compiler, or another program pertinent to the website development procedure.

Therefore, while numerous text editors like Notepad can be utilized to edit Python code, if they do not augment, mechanize or ease the editing of code, they are not the best code editors.

Now that you know the difference between an IDE and code editor, let’s look at the 9 most widely used Python IDE of 2022.

When it comes to Python web applications, it is necessary to use IDEs that can handle the advanced technologies like Machine learning and Data Science being implemented in Python script.

Here we have listed 9 best IDE for Python web development.

There are some of the major and standard requirements that are needed by every Python project in and after its development phase.

A project can possess more necessities than the ones mentioned below, but these are the fundamental features that any IDE must contain to be useful:

Creating a good Python coding environment for your project is essential. The overall objective and foremost benefit is enhanced developers’ productivity.

Which Python IDE is Apt For You?

Only you can choose the perfect Python IDE as per your business requirements.

But here are some of the basic recommendations when it comes to choosing an IDE for your Python development project:

Which is the best free Python IDE?

In Python programming, you have numerous choices for a great open-source integrated development environment. Some of the best free Python IDE for web app development are Pyzo, Eric, Eclipse with PyDev, Spyder, and PyCharm.

Is PyCharm good for beginners?

PyCharm is one of the most prevalent editors utilized by professional Python programmers and developers. The immense features of PyCharm do not make this IDE tough to employ. Many of the features like debugging, profiling, testing the code, quick fixing, remote development, error detection, and auto code completing aid in making Pycharm good for beginners.

Is Visual Studio a good IDE?

Visual Studio Code is a Python code editor that was formed primarily for the web app development and debugging of the latest cloud and web projects. It is an open-source that is proficient in merging both editor and good development traits very effortlessly. It is one of the prime choices amongst Python developers.

Python is one of the most popular programming languages used worldwide. As with most chief languages, you have an assembly of practical, useful, and robust IDEs, paid as well as free.

The chief Python IDEs and code editors which are favoured by most of the software developers universally are enclosed in this article.

Observing the advantages and disadvantages of each IDE, the developers can decide to select the best Python IDE for web development.

Still confused which is the best IDE for you?

Contact us. We provide free consultation services to clear your doubts. If you have a web project in mind, you can get your idea validated by professionals and get a free quote for your project.