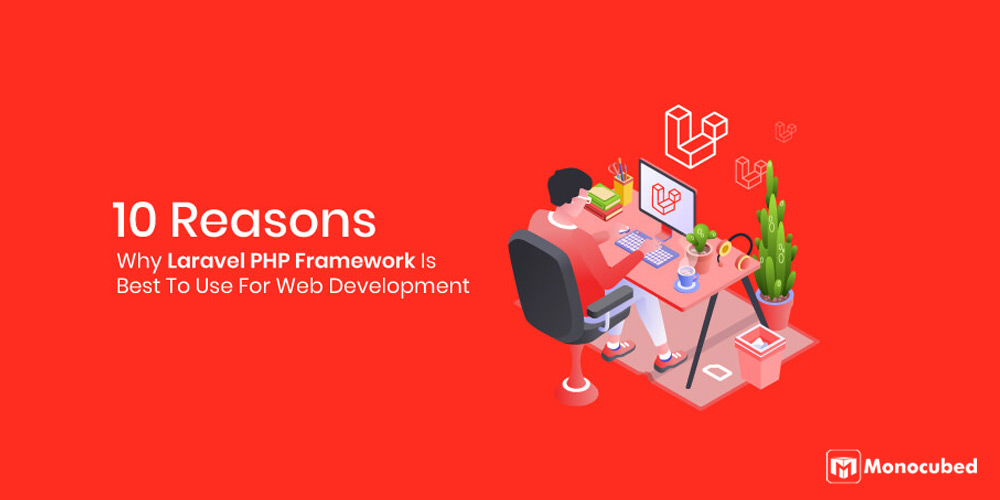 PHP is one of the popular web development languages, and Laravel marks to be better than the rest of the PHP web frameworks. This is because the Laravel PHP Framework has development tools and advanced features that enable rapid web app development.

Laravel also assists the website developers to simplify their app development procedure with reusable and clean code. It is one such framework that has rich characteristics and flexibility to term it as a perfect platform for building online applications and websites.

As a Laravel development company, we use the Laravel web framework for various web projects such as eCommerce sites, custom web solutions, MVP development and more.

Let’s understand what is Laravel and the main features of the framework.

What is Laravel Framework?

Laravel is a PHP web framework, developed by Taylor Otwell and projected for web application development that follows the model view controller (MVC) architecture and based on Symfony. Laravel is open-source and it reuses the present components of diverse frameworks that aid in building a web application. The web application, thus designed, is more pragmatic and structured.

Laravel presents a huge range of functionalities which integrate the elementary features of PHP frameworks like Yii, CodeIgniter, and other languages like Ruby on Rails. In CodeIgniter vs Laravel, we have observed that the database model of the former has object-oriented and the latter has a relational object-oriented model. Laravel has a rich set of characteristics that will enhance the speed of web app development. If you are accustomed to the core and advanced PHP, Laravel will make your mission easier. It saves a lot of time if you are scheduling to build a website from scratch. Furthermore, a website developed in Laravel is safe and averts numerous web attacks.

Some of the characteristics of Laravel are different ways for accessing relational databases, a modular packaging system with a dedicated dependency manager, its orientation toward syntactic sugar, and utilities that aid in application deployment and maintenance.

Want to Develop an MVP To Test Your Idea?

Design and develop a quick, low-cost MVP for your web app idea with our experienced Laravel development team.

Industries Where Laravel is Used

Owing to its functionalities and advantages, copious industries and businesses deploy Laravel for their development procedures. Let’s look at them.

There are numerous industries that need enterprise-level applications, apart from banks. This comprises the healthcare, entertainment industry, eCommerce, and others that include data processing, heavy traffic, and complexities. Laravel impeccably handles all these tasks better than other PHP options in the market with its traits like service containers, event broadcasting, and baked-in queue systems.

As we have also stated in eCommerce, it becomes apparent that Laravel also supports those applications development that includes microservices architecture. This architecture encompasses numerous independently operative modules, which come together to build one enormous application that is exclusively high-performing and scalable. This is attained through Laravel’s Lumen framework. Examples of companies employing the laravel framework are 9GAG, BBC, Crowdcube, FedEx, Lenovo, Pfizer, to name a few.

This comprises the content-based applications, development of websites, and CRM platforms. Laravel presents two solid methods to build such websites. You can utilize Laravel and incorporate it with a prevailing content management system like Drupal or WordPress or develop one completely from scratch. The benefit of the latter method is that it permits scalability.

Talking about scalability, Laravel is perfect for businesses that are small or medium-sized nowadays but will ultimately become larger tomorrow. As it supports microservices pattern, you can go forward and rapidly launch a website with instant necessities and at the same time be certain that you could scale without any doubts when you enhance in the approaching months.

10 Reasons Why Use Laravel PHP Framework?

Laravel is a powerful web framework that has simplified web application development. Compared to other popular web frameworks, Laravel is faster, more scalable and easier to use.

But before your decide to hire Laravel developers for your web project, let’s look in detail at some reasons why PHP Laravel framework is still relevant in 2022:

Why Laravel is best PHP framework?

Laravel is better than the rest of the PHP frameworks due to its progressive features and development tools that ease rapid application development. It has an MVC design for excellent support and performance, artisan CLI for simple and fast commands, eloquent ORM for easy interaction with app databases, satisfactory app testing features, and template engine for outstanding layouts.

What is Laravel used for?

Laravel framework has a powerful MVC architecture, intended for developers who require an elegant and simple toolkit to form fully-featured web applications. Laravel tries to take the discomfort out of the development process by simplifying regular tasks utilized in the maximum web projects, such as routing, authentication, caching, and sessions.

What is a PHP framework?

PHP frameworks rationalize the web app development written in PHP by offering a standard structure to develop web applications. In simpler words, PHP frameworks assist to endorse rapid application development (RAD), which saves much of your time, aids to develop more stable apps and decreases the quantity of repetitive coding for the developers.

Selecting an apt framework for your web application is one of the most crucial aspects in the initial phases of project development. All these vital reasons for the Laravel web framework are suitable for all types of web application development – small to enterprise level. It also offers numerous inbuilt functionalities that sanctions the developers to work with much ease. Contact Monocubed if you require Laravel experts to help you with your next app development project.