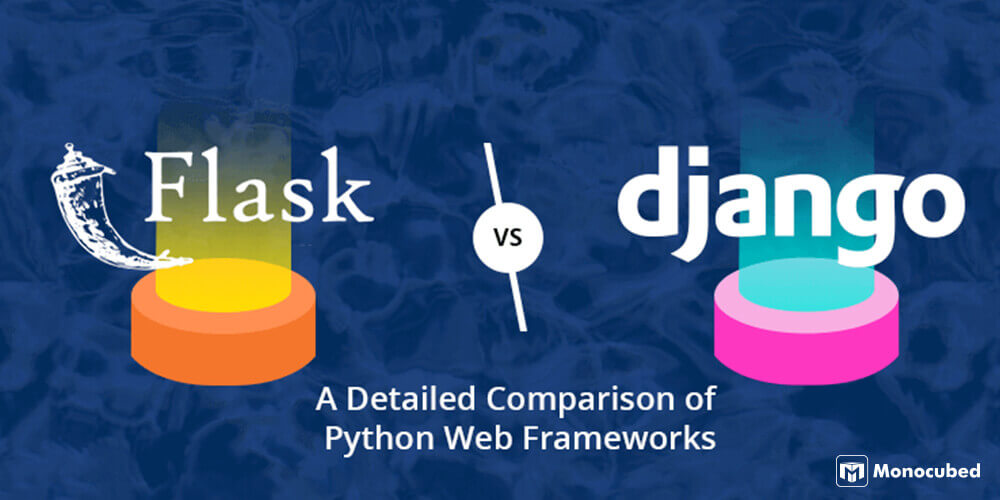 The web developers have varied options to select from a huge range of web frameworks when employing Python as the server-side programming language. They can take the benefit of full-stack Python frameworks to accelerate the development of huge and complex web applications by getting several robust tools and features.

Both Flask and Django, are enormously popular amongst Python programmers. Django is a full-stack Python framework, while Flask is an extensible python lightweight web framework. Here, from Flask vs Django, let’s understand the major differences between these two frameworks.

Flask At A Glance

Flask is a web framework that is written in Python. It is categorized as a micro framework as it does not need specific libraries or tools. It contains no database abstraction layer, form validation, or any other elements where the existing third-party libraries offer common purposes.

Nevertheless, Flask supports the extensions that may add a framework, comprising LinkedIn and Pinterest application characteristics as if they were executed in Flask itself.

It was created by Armin Ronacher, who managed a group of international Python supporters called Poocco.

It is easier to learn as it has less base code to devise a simple application. Flask is constructed on Jinja2 template engine and Web Server Gateway Interface (WSGI) toolkit. Applications that utilize the Flask web framework comprise LinkedIn and Pinterest.

Flask has turned out to be prevalent amongst Python enthusiasts. It has the second most stars on GitHub amongst Python web development frameworks, as of October 2020 and was chosen as the most popular web framework in Python Developers Survey 2018.

Below are some of the vital features that depict what is Flask used for:

We are interested. Be it a simple web app for your startup or a complex enterprise solution, our Python developers can help develop it.

Django At A Glance

Django is a free to use framework that works on the model-template-view (MTV) architectural design. This Python-based web framework is preserved by the Django Software Foundation (DSF), an American autonomous body established as a 501(c)(3) non-profit.

Django’s principal objective is to simplify the formation of multifaceted, database-driven websites.

The open-source framework accentuates pluggability and reusability of components, low coupling, rapid development, less code, and the norm of don’t repeat yourself (DRY). Python is used throughout the process, even for setting data models and files.

Django also delivers an elective administrative create, update, read, and delete user interface that is produced vigorously through contemplation and configured by the means of admin models.

Some of the well-known sites that exercise Django are Instagram, PBS, The Washington Times, Mozilla, Bitbucket, Nextdoor, and Disqus.

You may also like: Django Vs Express: 11 Key Differences To Observe

Django is a web framework for Python which renders a classic technique for effective and fast website development. In 2003, it was started by Simon Willison and Adian Holovaty as an in-house project at Lawrence Journal-World newspaper. It was publicly released under the BSD license.

This framework was entitled after guitarist Django Reinhardt in July 2005. Below mentioned are a few important features of Django:

Flask vs Django: Comparison of The Best Python Web Frameworks

Django is termed as a full-stack Python web framework. Furthermore, it is built based on batteries included. Such a method in Django makes it simpler for Django developers to achieve general web development errands like URL routing, user authentication, and database schema migration.

On the contrary, Flask is a lightweight, simple, and minimalist framework. Though it lacks some of the inbuilt traits supplied by Django, it assists the developers to keep the base of an application extensible and simple.

As a top Python development company in Canada, we use both Flask and Django in our projects. We have compiled this table to help you understand the difference between the best Python web frameworks – Flask and Django:

Pros and Cons of Django

Django is one of the most prevalent web frameworks.It has an extensive support community and channels to connect and share.

Following are the advantages and disadvantages of Django:

Get your idea validated by professionals. Discuss unique features to add. Know the cost of development. Know the timeframe. Let’s start building.

Pros and Cons of Flask

Flask is easier to learn as it has less base code to devise a simple application. It is constructed on Jinja2 template engine and Web Server Gateway Interface (WSGI) toolkit. Applications that utilize the Flask web framework comprise LinkedIn and Pinterest.

Following are the advantages and disadvantages of Flask:

Flask or Django: What Should You Prefer?

Numerous developers have a common question, Django OR Flask – which framework is better? By now, from the difference between Django and Flask, you might have got a reasonable idea of how each framework functions and what are the benefits offered.

You must prefer Flask if you need a rough level of control whereas Django developers depend on an extensive community to create exceptional websites.

Django combined with the REST framework assists you to develop powerful APIs, while Flask needs more work, so there are higher chances to commit a mistake. The best way is to develop a few rudimentary CRUD applications with both the frameworks and choose which framework fits your project better.

Is Flask easier than Django?

You can use complete Python, that is, customize the structure of your app. On the contrary, Flask might be complex to employ for beginners. Nevertheless, when it comes to learning the architecture of the framework, Flask is easier than Django.

Is Django the future?

Is Flask a frontend or backend?

Flask is utilized for backend, but it makes usage of a templating language known as Jinja2 which is employed to create XML, HTML, or other mark-up formats that are reverted to the users via an HTTP request.

What is Flask in Python?

Flask is a lightweight Web Server Gateway Interface (WSGI) application framework. It started as a simple wrapper around Jinja and Werkzeug and has turned out to be one of the most popular Python frameworks. Flask proposes suggestions, but does not impose project layout or any dependencies.

From the above-stated table of Django vs Flask, the intention is not to assert that one framework is superior to the other. But it is to observe the vital points that will empower you to make an informed judgment, against the requirements of your project.

Both Python frameworks, Django and Flask, are suitable for quick web app development, although Django is said to have a steeper learning curve. Flask delivers the most flexibility in form of customization and Django has a bigger community of users and hence, provides more support.

However, if you are still confused, you can contact our proficient Python developers at Monocubed, where we develop a robust web application after considering the requirements of your project.