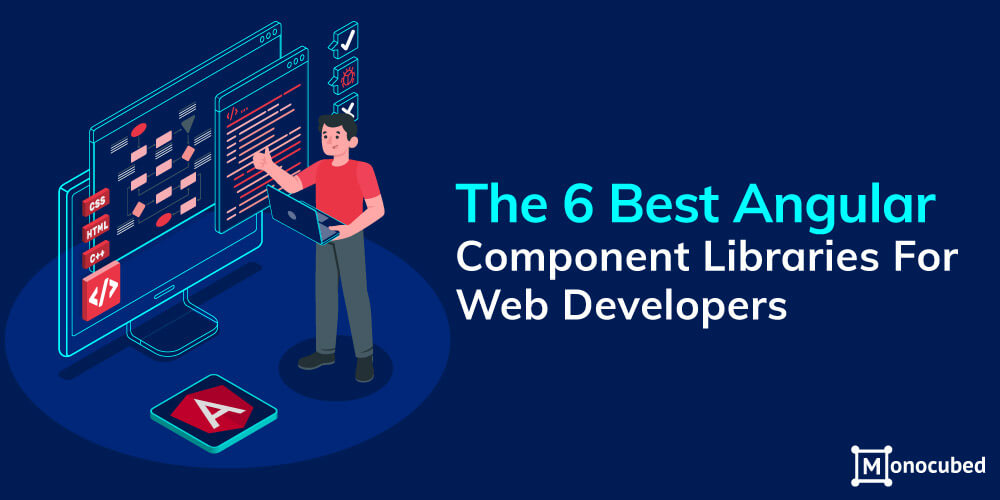 Rightly called the ‘modern web developers platform,’ Angular is one of the top three web frameworks being used worldwide according to the Stack Overflow developers’ survey. With the support of a professional community of developers and advanced functionalities, there is no competition for Angular.

The Angular framework is a complete package for frontend development, providing rich features for developing desktop, mobile, and web applications. There are a lot of component libraries that extend the already existing utilities of Angular. These libraries provide some components that can automate your tasks, perform common, repetitive jobs and save a ton of coding time.

We have gathered some of the best libraries and curated a list of the top Angular components libraries that you should start using in 2021. These libraries offer components for designing UI interfaces, managing and accessing databases, customizable templates, and much more. But first, let’s take a glance at Angular and understand its features.

Angular is an open-source Typescript-based web framework managed by the Angular Team at Google and by a community of professional developers. It is a thorough rewrite of AngularJS using TypeScript, removing all dependencies on Javascript. Angular can create complex web and desktop applications that support thousands of users.

Angular is one of the most mature front-end development frameworks to date. It is a complete development package, proving to be a powerful toolkit for developers. Some of the main attributes that make Angular so popular are –

What is a Component Library?

A component library is a collection of pre-designed parts of a website or pre-coded parts of the software. Designers can directly add the component to their app, avoiding the need to code everything from scratch.

It helps designers to work in a consistent way and becomes very time efficient when executed correctly. Many UI component libraries also provide customizable features. Thus, developers can have the flexibility to be creative and customize or create new components.

Component libraries will also be helpful for collaboration between the team. If you have a massive project with many team members, a component library will make it easy to control different versions and stay consistent throughout the application.

Angular is a massive framework that has many functionalities and utilities. It has many built-in libraries that make it easier for developers to work. Core libraries like RxJS come pre-installed in the Angular-CLI project. It also has many API-specific and frontend-specific libraries.

But it is also hard for developers to use Angular if they have to rewrite codes for each small function. It is also pertinent to allow space for creativity and customization to a user. Therefore, Angular has created Angular Material to provide external components for users. Apart from this, there are vast numbers of UI components libraries for you to choose from, such as Onsen UI, NG Zorro, NG Lightening, or Vaadin Components.

Using an external component library can make the development process time and cost-efficient for companies. Here we have made a list of the best angular UI component libraries that you can use in your Angular projects.

From the npm trends and GitHub stars statistics, it is clear that Angular Material is the most used Angular web component library. If you prefer using Google’s Material Design for designing user interfaces, Angular is the best library choice for your company.

When we compare their performance and number of stars, ng-bootstrap and ngx-bootstrap are almost equally tied. But our personal experience and the number of downloads suggest that ngx bootstrap should receive a higher preference when you want to work with Bootstrap components, owing mainly to the timely updates.

PrimeNG is a complete library package, providing components for all UI requirements. Its DataTable is the best data grid component for Angular. We recommend using PrimeNG when you want to work with nested table structures and require a rich data table with sorting and filtering.

Developing companies should use Onsen UI when creating rich mobile applications. It works great with Monaca, a platform for building hybrid apps. You can develop fantastic UI for mobile devices with the Onsen UI library. Although Vaadin has comparatively lower stars, it is one of the best libraries for Angular components.

With Vaadin, you can combine Angular with polymer components which is great for creating a seamless user experience.

Is Angular a frontend or backend framework?

Angular is a front-end JS framework. It uses TypeScript to generate HTML, CSS, and JavaScript code. It is mainly used for UI-UX designing for all types of hybrid and native applications – be it web, mobile, or desktop apps.

Which is better – Angular Material or Bootstrap?

We have provided you with the best component libraries for Angular to use in 2021. Each library mentioned in the list is the best of the best, providing all possible features required for developing beautiful Angular applications.

Vaadin, ngxBootstrap, Angular Material are all exceptional choices of Angular libraries. No single one can be termed better than others on all counts. But depending on your usage and project team, there is only one perfect fit for you. Our team of expert Angular developers can assist you with finding your UI component library and all other development needs.

Don’t forget to leave in the comment section your favorite library to use with Angular. For more such Angular-related informative articles, check out our other Angular Blogs.