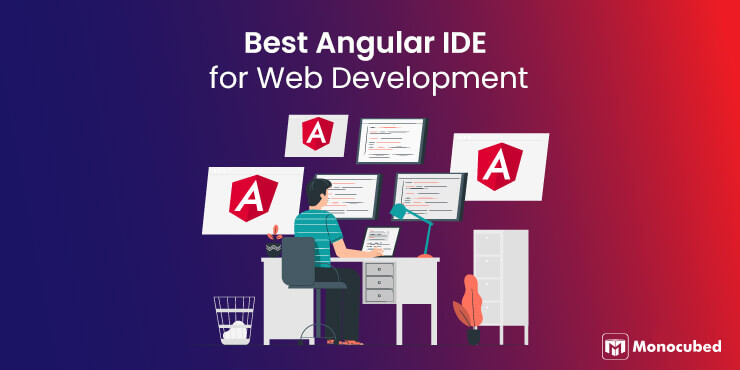 Developers use various tools and frameworks during software development, be it for code creation, UI-UX designing or testing. Those tools are carefully selected in the market for some kind of development process that provides hands-on productivity, especially for Angular development.

Development tools and frameworks include various types of text editors, compilers, code libraries, etc.As Angular continues to be the topmost JavaScript framework for developing mobile and web applications, the number of IDE (Integrated Development Environment) options is also increasing along with it.

The IDEs are not just limited to back-end development; in fact, some of their efficiency and productivity can be helpful in front-end development. Let’s see what IDE is and what are the best IDEs for Angular development?

There are various tools developed for Angular Developers, but very few tools help developers increase hands-on productivity.IDE is intended to make things easier for the developers’ work. Being an Angular web development company, we use IDEs and code editors in our web projects.

Here are the top 8 Angular development IDE that can help you create outstanding web projects.

An Integrated Development Environment also contains essential features that offer many benefits to the developers and help them develop web apps very quickly.


Have a Web App Idea But Confused Where to Start?

IDEs are the best option for developers to take their software development to the next level without hassle. It allows developers to do fast setup and standardize the process across the tools.

IDE is the one platform from which developers can configure various tools rather than spending time deciding different tools and platforms for various tasks individually. Apart from that, there are other benefits of using an IDE. Here are some of them:

Which is the best IDE for Angular?

Integrated Development Environment is a program that developers use to simplify their work. In most cases, it is used to improve the development process and enhance the developer’s productivity. It has the potential to integrate the software into the development system and analyze the entire process.

Microsoft VSCode is the best code editor for developing web applications and websites. We have already described the features it offers for the Angular-based application in this article, and the core reason for choosing this is developers find VSCode as one of the best IDE for web app development.

Is Webstorm better than Vscode?

We hope that this list of top 8 free Angular js editors will help you, and you will take all the advantages by using them to create one of the best high-performing applications.

Above listed applications are the best in the industry and chosen by the developers that empower them to create an enriching experience for their end-users. If you want to have the same experience for your project, you can contact our experts anytime; we will be happy to hear from you.