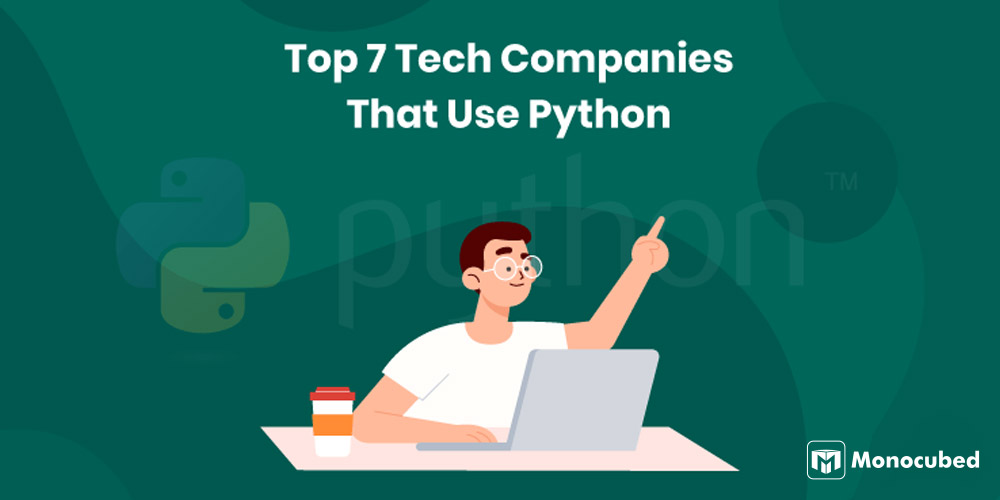 For a fast and performative websites, it is crucial to choose the right technology stack. A wrong scripting language or framework can lead to redesigning everything from scratch which takes up a lot of time and money.

There are numerous tech companies that use Python as their web app framework.

But why is Python popular? Which framework is best for Python? Is Python used by companies that are well-known?

In this blog, we examine the top companies that have chosen Python in their technology stack. With these companies as inspiration, you can develop your own web app using Python.

Before we take a look on businesses that have utilized Python, let us learn some basics about the popular language, Python.

Python is an advanced, all-purpose programming language. It was invented by Guido van Rossum and first published in 1991.

Its design philosophy lays emphasis on code readability with its remarkable utilization of major whitespace. Python uses an object-oriented approach that aids programmers in writing logical and clear codes for large as well as small-scale projects.

As per TiobeIndex Statistics, Python is the rapid-growing main programming language in 2022. Python is the most user-friendly language, enabling solutions to various challenges encountered by businesses, be it associated with AI, development, or accessing database statistics.

This validates that Python is the most preferred language for some of the top-tier companies in the industry. Let’s look at the 7 top companies using Python in their technology stack.

7 World-class Companies that Use Python

Despite intense competition, Python, being invented in the 1990s, is still one of the most favorable programming languages used by numerous giants. In fact, a Python developer is one of the highest paid software development jobs.

The chart below states that these various industries use the software in Python for their dynamic web app development, where Information Technology and Services (8%) and Computer Software (21%) and are the principal sectors.

Let us take a look at top 7 well-recognized companies which use Python.

What is Python Used For?

It is a versatile language and applications developed in Python can be used in varied disciplines. It is employed for a diversity of tasks, like artificial intelligence, machine learning (ML), data analysis, and automation.

Generally, Python is used for automation and scripting purposes.With Python being a popular language, you can build a robust web, desktop, and mobile applications, and also execute QA testing.

Let us observe what Python is utilized for:

As we already know that Python is an object-based programming language and in that order, everything is an object here, including modules and libraries. Owing to this fact, this core language has the ability to generate codes efficiently.

This means that the software can influence its functions. Another reason companies prefer Python is that it supplies the software engineers with the type of scalability that is hard to attain when we use other languages.

Based on the kind of key features and functionalities, here are the top Python frameworks, that provide consumers, both micro-frameworks and full-stack frameworks:

Why use Python for web development?

The various benefits of using Python that aid you in availing faster web application development are its coding requires less time to write because it has clean and simple syntax, in-built code libraries for machine learning, image, and data processing. Moreover, it has a framework for unit tests that aids you send bug-free codes.

Which websites use Python?

Several successful IT companies are choosing Python for backend development. Some of the big companies which use Python are Facebook, Instagram, Netflix, Stripe, Spotify, Reddit, Uber, Dropbox.

NASA is employing Python to put into practice a CAE/CAD/PDM depot and model administration, incorporation, and conversion system which would be the fundamental infrastructure for its upcoming generation concerted engineering setting. In addition to this, it is the development language for OpenMDAO, a framework which is formed by NASA for resolving multidisciplinary design optimization issues.

From this blog, we have analyzed that these top innovative companies have apps built with Python. You can see that in the current times, Python has been one of the most admired programming languages.

Besides, it is extremely adapted in rapid-developing fields like internet usage and media, finance, and computer software.Websites that use Python exercise its huge compilation of libraries, elevated scalability, and frameworks, comprising quick development and developer-friendly nature.

Python is believed to be a fit for an app that scales horizontally, takes advantage of the cloud, comprises ML and data science.

Contact us, if you require a Python web development company that is experienced in developing custom Python solutions.