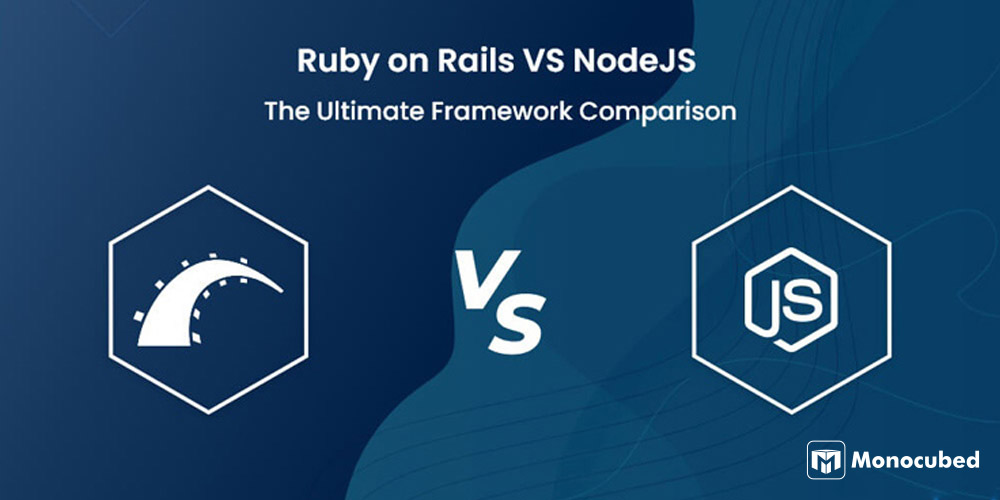 With evolving technology, new frameworks and web development tools are emerging in the market. But too many options can lead to a lot of confusion and instability. When you work in a competitive field like web development, quick and optimal results are a must.

Node.JS and Ruby on Rails are two such very popular web technologies that will help you optimize your backend development process and receive rapid results without any hassle. But which tool should you use?

We bring you a Ruby on Rails vs Node.JS comparison to help you decide which is the superior tool. With this article, you will be able to determine which framework will suit your project. Ready to explore further?

Introduction To Ruby on Rails

Ruby on Rails is a web framework based on the Ruby programming language. Pragmatic and robust, Rails is used for the server-side development of performative websites and web applications. It follows MVC architecture to offer data consistency, abstraction, reusability, and testability.

Developed in 2005, Ruby on Rails is a front-end framework that can build large web-based applications that support heavy user traffic. It is a collection of libraries containing code snippets and reusable modules called Gems. The framework, believing in the ‘Convention Over Configuration’ approach, offers an easy-to-use environment with in-built conventions to RoR developers. For more information check out our other Ruby on Rails blogs.

Some features of Ruby on Rails are –

A Brief: What Is Node.JS?

Node.JS is a JavaScript runtime environment that is used for executing server-side code. It is not a framework like Rails, but it assists developers in server-side development using the popular scripting language JavaScript. Running on the V8 engine, it can execute a JavaScript program outside a web browser.

Node.JS was developed to be a lightweight solution for web app development. Being a custom Node JS development company we use it for building scalable, high-performing apps. With a huge community of supporters, many popular companies use Node.JS in their technology stack. Corporations, such as GoDaddy, Groupon, Microsoft, and Amazon Web Services, use Node.JS as their JS runtime system.

Some features of Node.JS that make it such a popular choice are-

Talk to us. Let’s validate your idea for free and convert it into a highly performative web application.

In this criteria, there is a tie for Rails vs Node.JS. Both Node.JS and Ruby on Rails are suited for a particular type of application development.

Thus we come to an end to the Ruby on Rails vs Node.JS comparison. As evident, there is no clear winner, with both the web development tools having their own set of advantages. These defining criteria may help you choose the right technology in your website tech stack.  It is important, along with differences, to also analyze your requirements before choosing the backend technology.

So let’s look at the advantages and disadvantages of using Ruby on Rails and Node.JS.

Pros and Cons of Node.JS Framework

Node.JS is very popular among JavaScript developers. Built on Chrome’s V8 engine, it is perfect for implementing JavaScript in the program code and the front-end of the website. Node.JS is so valuable in the development community because of the following benefits it offers –

But before choosing Node.JS, you should also consider the following drawbacks –

Pros and Cons of RoR Framework

Rails is a widely used web development framework that provides many advantages to developers. With this server-side framework, you can create seamless web applications. In this section, we will discuss the benefits and pitfalls of using Rails for project development.

Want to Develop an MVP To Test Your Idea?

Design and develop a quick, low-cost MVP for your web application idea with our experienced Ruby on Rails development team.

As with all, there are some downsides to the framework. Some disadvantages that you may face while using Ruby on Rails are –

What To Use – NodeJS OR Rails?

As evident from the NodeJS vs Ruby on Rails battle, no framework is better than the other. It is up to you to decide which will be more suited for your development project.

In general, we recommend using Ruby on Rails when you require a robust framework that can develop secure, highly performative web apps. On the contrary, when there is a requirement for a customizable coding environment that supports JavaScript applications, Node.JS should be preferred.

Node.JS is suited for your technology stack when you require one of the following –

Ruby on Rails, on the other hand, should be preferred for web development when you are working on-

Some popular companies, such as Airbnb and Facebook use Ruby on Rails for their websites. These popular website applications handle thousands of users simultaneously while ensuring top performance. LinkedIn, Uber, NASA are some companies that have used the Node.JS environment for their web apps.

Is Ruby on Rails slower than Node.JS?

While its speed improves with every new version, Ruby on Rails is still a lot slower than Node.JS. Rails is an interpreted framework, which means the code is not compiled into machine language. This along with the memory-intensive multi-threading reduces the performance of an RoR website.

What can I use instead of Rails?

There are many alternatives to Ruby on Rails available in the market. Like mentioned, although Rails is a robust framework, it does have its own problems. For a more lightweight and minimalistic solution, you can use Sinatra. Hanami is also an excellent Ruby-based alternative that is apt for single-purpose applications that want to avoid the performance issues of Rails.

No. NodeJS is the most popular backend environment of JavaScript. Most developers prefer Node.JS for its lightweight, scalable applications. Although there is a slight decline in its usage, there is no alternative to Node.JS that can compete with its wide range of functionalities. It is apt for developing web based apps and websites.

Ruby on Rails and Node.JS are both handy web development tools. With this Node JS vs Ruby on Rails comparison, we have compared their pros and cons to help you decide which tool to include in your technology stack.

The success of any website is hugely dependent on the web developers and the tools they use. Therefore, it is very important to find the ideal tools before developing. At Monocubed, we provide assistance for web development using state-of-the-art technologies. Our team of experts will understand your needs and design an ideal website for your project.