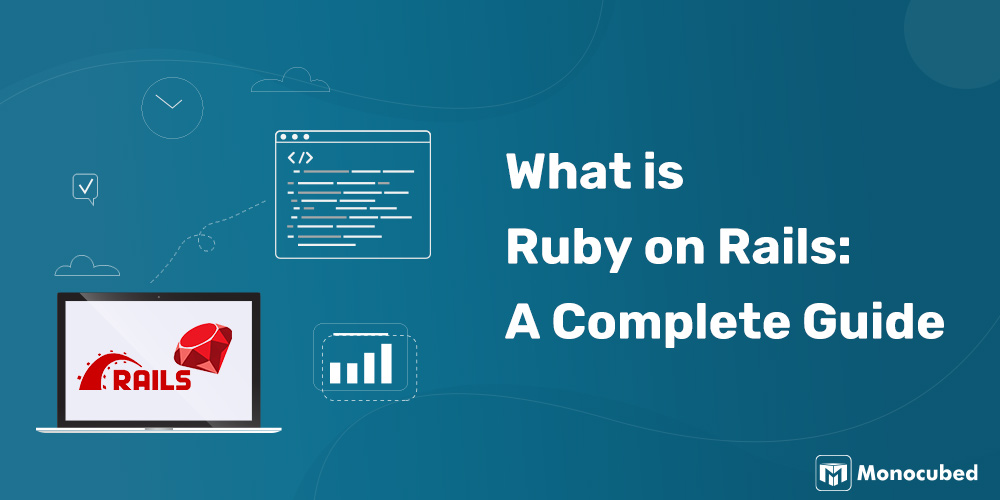 There are new web technologies and tools introduced every other week. A framework that is trending right now might become obsolete in a year.

So how do you choose –

Which technology to use in your web project?
Which web framework to learn?
Which programming language to pursue as a career?

We have an answer for you – Ruby on Rails.

Rails is a powerful web framework that has stood the test of time. Developed way back in 2003, it is still a widely-used framework for web application development.

In fact, according to Builtwith, there are 1,162,775 live websites using Ruby on Rails as of April 2022. This proves that Rails is an ever-green web framework and is a safe bet for you. 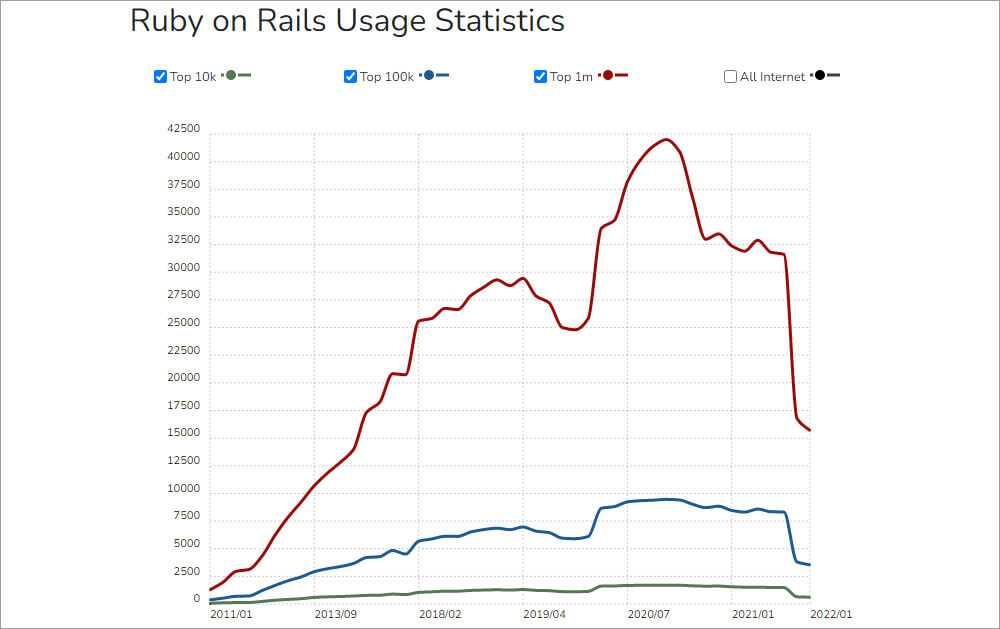 In fact, being one of the leading Ruby on Rails development companies in Canada, we have developed many projects using Rails. Therefore, we have curated this comprehensive guide explaining what is Ruby on Rails, what it is used for, and some outstanding features it offers.

Ruby on Rails (RoR) is an open-source web framework used for developing dynamic web applications and websites. The framework is created with the Ruby programming language and aims to simplify Ruby development.

Ruby on Rails was founded in 2003 by David Heinemeier Hansson “for programmers and coders happiness.”

Ruby on Rails simplifies and streamlines the web application development process. Meaning you start building web applications without requiring a lot of theoretical knowledge. Rails takes care of a lot of background details so that you focus on only developing your application. It provides default structures for web pages, databases, and web services.

Understanding Ruby on Rails With an Example

A simple way to understand the usefulness of Ruby on Rails is by comparing RoR with ready-to-use kits. Imagine you want to build a new cupboard for your house. You could get the raw materials like wood, create a design, take measurements, cut the wood, and hand-build each shelf of the cupboard. That is how you build a web app with Ruby.

But there is a more straightforward, faster alternative – assemble-yourself kit or Ruby on Rails.

The kit contains ready-made shelves and doors and hooks, and nails. You just have to follow the instructions in the guide and attach the parts correctly, and your cupboard is ready. Similarly, Ruby on Rails provides all the components to build a web application simply and efficiently.

You only need to learn the necessary commands and concepts for building your web software. Thus, Ruby on Rails is technical enough to build complex, unique applications without worrying about the background processes.

Convert your idea into a modern web application that scales with your business requirements. Get a free quote for developing your custom web solution.

Ruby on Rails is a flexible web framework. Using Ruby on Rails, you develop a variety of websites and web applications such as eCommerce sites, web portal, single-page applications, progressive web apps, and more.

Before we look in detail at what RoR is used for, let’s understand why Ruby on Rails was developed and what problems it solves.

The Design Philosophy of Ruby on Rails

Ruby on Rails is designed to be a very opinionated framework. In short, RoR thinks there is a right way to do things and makes it the default. This way RoR developers by default are following the best development practices while coding.

Imagine you built a date input text button for your app. If you want to use the same feature somewhere else in your web app, you might just duplicate it. But in software development, duplicating a code comes with a lot of problems. If you copy-paste a code, you may get unexpected errors, factoring issues, and logical contradictions.

For this reason, RoR is designed on the DRY or Don’t Repeat Yourself principle. In short, DRY means that each entity in your code should have a single, unambiguous, and authoritative definition. If you make any changes in one entity, it is automatically synced to all the other connected entities.

Ruby on Rails developers create small, specific functions that can be easily reused and extended throughout the codebase. You write code once and keep the code clean and modular.
Reuse the code anywhere in your projects by calling the function wherever required. This prevents any logical errors.

The DRY principle allows programmers to work more productively. Ruby on Rails encourages developers to reuse code as much as possible.

Ruby on Rails follows the convention over configuration principle for web development. In short, there is a set of default configurations and conventions that a developer has to follow when developing a Rails web application.

Generally, in many other web frameworks, you have to set up a lot of configuration files before you start coding. But Ruby on Rails takes care of configurations and automatically assigns default values.

By providing default structures for classes, databases, and configurations, RoR makes sure that you don’t waste time on any unnecessary details. You only have to explicitly write code if you want to stray away from the default.

For example, let’s look at the naming conventions in RoR. If you have a class named ‘Product,’ RoR will map it to a table called “Products” in the database automatically. So you only have to write code for mapping if you want to connect your class ‘Product’ to a table “Sale Items.”

This way, you don’t have to worry about the naming of your database fields, classes, and objects. You can directly start programming.

By taking a lot of trivial decisions out of your hands, RoR makes it easier for new developers to start.

The design doctrine of Ruby on Rails is unique and well-defined. The framework is optimized for a programmer’s fun, and DRY and CoC are two base principles for achieving that.

Features of Ruby on Rails 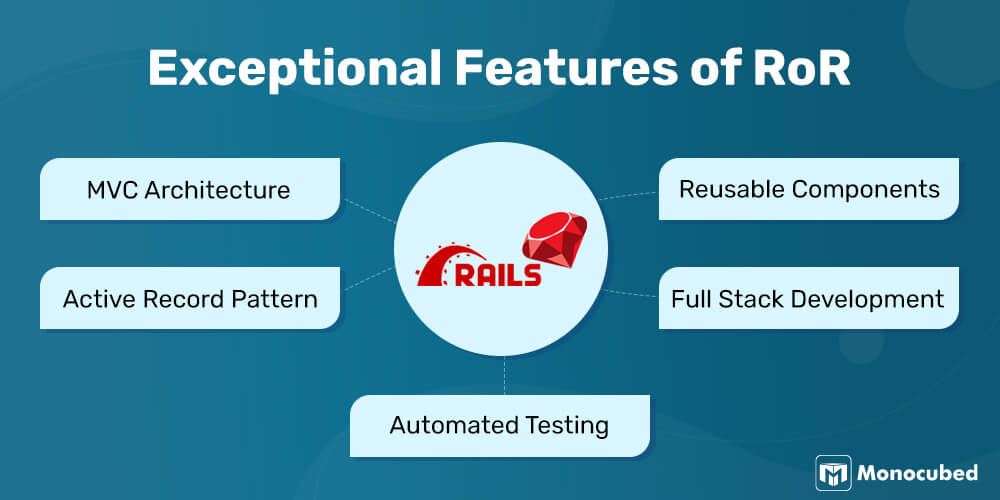 There are a lot of inbuilt features of Ruby on Rails that make it easy to learn and use. As discussed earlier, the framework is optimized for a programmer’s happiness. Compared to other web frameworks such as Node.js, you will find Ruby on Rails extremely intuitive to use. Let’s look at some vital features of the Rails framework that will help you understand RoR better.

So, we have discussed the most important features of Rails. There are a ton of other functionalities offered by Rails that makes it an ideal choice for web development.

Now let’s look at what kind of projects you can build with Ruby on Rails.

What is Ruby on Rails Used For? 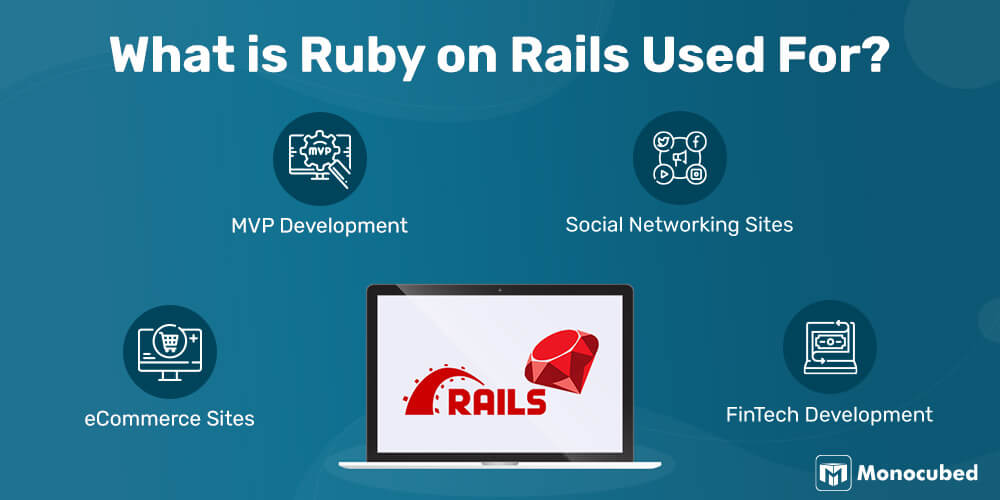 So all these features are excellent, but what kind of apps can I build with Ruby on Rails?

Rails is a very versatile framework. You can build a variety of Rails applications ranging from an eCommerce platform and payment gateways to static websites, social media applications, and browser games.

Our Ruby on Rails developers will assist you in developing a custom social media web app with all the features you require. Contact us today and start developing.

Is Ruby on Rails dead?

No, Ruby on Rails is very much alive and still used to build web applications. The Rails community is very active with experienced developers constantly guiding and helping new RoR developers. Web developers prefer Ruby on Rails because it is a fun and productive framework. It lets developers focus on coding, using defaults to minimize the developer’s work.

What is Ruby on Rails good for?

Is Ruby on Rails easy to learn?

Ruby on Rails is very beginner-friendly. You need to have knowledge of only Ruby programming language and a few basic concepts of web development to start working with Rails. RoR takes care of a lot of background details automatically, so you don’t need to know everything. Moreover, RoR is very close to the English language. Thus Ruby on Rails framework is extremely easy to learn and understand.

Rails is a robust framework for developing modern websites and web apps. Whether you are a beginner looking for a web technology to learn or an experienced programmer looking to add a new web framework to your repertoire, Ruby on Rails is a good choice.

Building scalable, cost-effective web apps within a limited time is easier than ever using RoR. We say this from our experience. As a web development service provider, we have used Ruby on Rails in a lot of our web projects, such as Fieldcamp.

Have a web app idea in mind?

Contact our team to convert the idea into a high-earning Ruby on Rails web app.