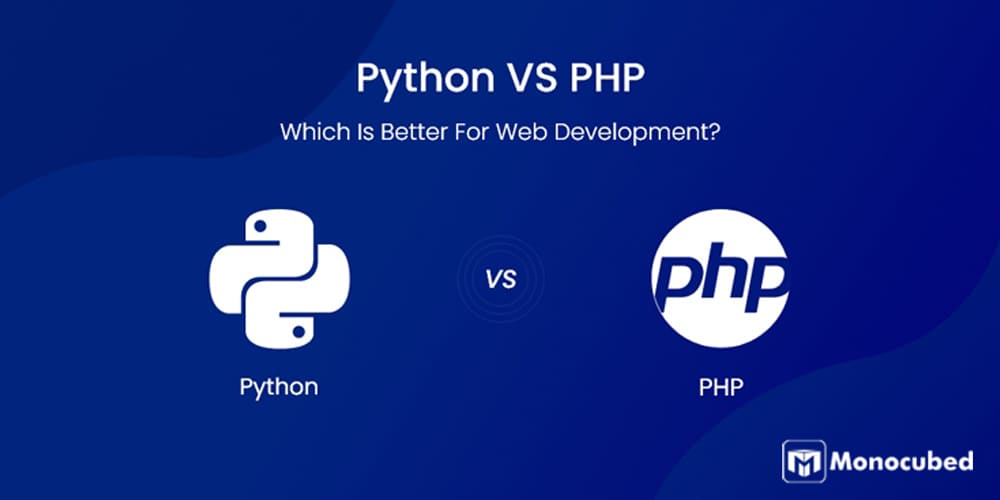 Choosing the right programming language is essential for a development project. Python and PHP are the leading choices for backend developers today. But which language is right for your project – PHP or Python? What is Python used for? When to choose PHP? Is PHP faster than Python?

Well, not to worry, we are here with all the answers- a Python VS PHP battle. In this article, we bring to you all the major differences between both languages so that you can decide once and for all which is the superior language. But first, let’s have a small introduction to PHP and Python.

An Introduction: What is Python?

Python is an open-source general purpose programming language that focuses on object-oriented programming concepts. It is one of the most widely used languages today, offering easy-to-understand high-level syntax. The guiding principles of Python are to ‘simplify all that we can’, and ‘simple is better than complex.’ It is one of the most loved and wanted languages according to this Stack Overflow survey 2020.

Developed in 1991 by Guido Van Rossum, it is a top choice for projects involving the development of software, be it product development or application development. Multiple organizations around the globe trust Python with their applications.

An object-oriented programming language like Python provides building blocks to you in terms of objects and classes. It also employs functional, procedural and aspect-oriented programming paradigms. Python works as a scripting language for web browsers and you can use it for developing web applications. With JavaScript vs Python, we compare Python with the most popular web language to see if Python can surpass JavaScript.

Its smooth learning curve and performance make it apt for quick prototyping and quick updates. Many new evolving technologies such as data science, machine learning, and artificial intelligence also find Python to be a very supportive and flexible language owing to the robust inbuilt library it offers.

The latest stable version of Python was released on 19th February 2021. Python 3.9.2 was released with a lot of new functionalities. Some of the new features and updates included in the version are-

Other than the latest features of the new and improved version of Python, there are way too many features offered by the language for developers like you. Some exceptional properties of Python that make it so widely beloved are-

Confused where to start? Don’t know how much it will cost? Wondering if it will be successful? We’ve got you covered. Let’s talk.

PHP is the preferred choice of programming language for developers creating websites. An open-source server scripting language that is used for developing user-driven, interactive web pages, are some of the features of PHP. With an incredible collection of libraries, plugins, and add-ons to expand functionalities, and massive community support, PHP is a developer’s choice of language.

Developed by Rasmus Lerdorf in 1995, it was first known as Personal Home Page. Soon it was developed as a full-functioning language, and renamed as PHP- HyperText PreProcessor. With inbuilt library support, database support, and parsers, PHP is a complete server-side language.

Supported by almost all web browsers, PHP is great for the backend development of web apps. There are also a lot of web frameworks available for developers to access ready-to-use modules and functions for common tasks, such as a contact form or a search queries tab or a menu dashboard.

PHP powers almost all the websites on the internet. It is a fast, pragmatic and flexible language, used to manage dynamic content on HTML sites, databases, and session tracking. At Monocubed, we provide PHP development services for building entire sites for eCommerce, fintech, and other corporate giants.

The latest version of PHP was released on 14th March 2021. It introduced significant new functionalities, some of which are –

PHP is a preferred choice of language for web application development. Along with providing web frameworks for quick and straightforward code writing, PHP also offers other remarkable features such as –

Now that we have a proper understanding of the features and usage of both PHP and Python, we will move forward with the Python VS PHP comparison. We have considered various parameters, such as speed, performance, popularity and more for the comparison between Python and PHP comparison.

Here, we have compared Python and PHP with each other on the basis of several parameters. While PHP emerged as a winner for many, Python was victorious in other criteria, such as community support and Market needs. But the question remains, which is the better choice for you?

Simple, after understanding your website needs, look at the pros and cons of both languages and decide which is the right choice for your project.

Do You Want to Develop A Scalable Web App?

If you require a scalable, high-performing web app for your business, talk to us. Streamline your business processes with our custom solutions.

Pros and Cons Of Using Python and PHP

Python is a high-level programming language that is designed to be simple in implementing and straightforward to use. With many features and functionalities, Python is one of the most popular languages for programmers. But like every other technology, it also has its own problems and issues. Let us look at the pros of using Python and some of the trade-offs of the programming language.

PHP is a fast scripting language that is used for developing the end-to-end infrastructure of web pages. Let’s look at some of the advantages and disadvantages of using PHP –

Is PHP faster than Python?

Yes. The updates in the latest version of PHP have brought it to new heights in terms of speed performance tests. In most cases, PHP is a faster programming language compared to Python. The core PHP team has introduced various functions to speed up PHP. But speed is not as much of a problem for Python, as most websites do not require that much power. But preferring PHP for time-intensive applications is a good choice.

How is Python different from PHP?

PHP is a server-side scripting language used for developing scripts that run on web browsers. These scripts are basic guidelines for the browser to execute. Python on the other hand is an object-oriented programming language that is used for implementing algorithms and programs by telling the operating systems what to do. While both are used for web development, the difference lies in the use cases.

Which language to use for the backend?

As we have seen in this article, there are thousands of reasons for industries to use Python and PHP. They are both top programming languages, preferred for web development. Both are a great choice for the backend development of websites.

We, at Monocubed, will help you choose the relevant language and web framework for your project. Our team of experts can provide guided assistance for developing the ideal website or web application for your business. You can read more about Python and PHP, and other development trends by subscribing to our newsletter.