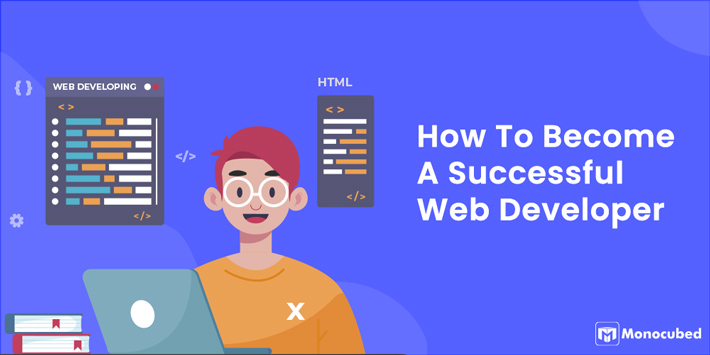 Then this blog is especially for you.

If you are passionate about designing and programming then web development is a high-earning, interesting career option for you. In this blog, we cover all the basic skills you have to master and how much time you need to spend learning each.

The 5 simple steps to becoming a web developer are-

In this blog, we will explore each of these steps in detail, along with the total time it takes to develop each skill required for a web developer.

How to Become a Web Developer in Five Simple Steps

Meanwhile, there’s a whole world of resources to teach you how to become a web developer, many of which are free. Read on to learn some of the basic steps you’ll need to take for becoming a highly paid web developer.

Career Trends and Job Opportunities For A Web Developer

Web development is an ever-growing field. More than 1.3 million web developer jobs are available worldwide. and more than 47,000 new development jobs were created in the last two years, with the market expected to grow an additional 15% in the next 5 years.

Mondo found “Web Developer” the most in-demand job title in tech and one of its top-paying jobs.

According to the job site Indeed, the average salary for Web Developers in Canada is $66,571 per annum. For the United States, it is $71,531, with Senior Web Developers getting an average of $95,325. That makes web development one of the most lucrative positions that do not require a bachelor’s degree.

What Technologies do You Need to Learn for Becoming a Web Developer?

We have listed all the major web development courses and concepts you will have to learn as an aspiring web developer. But how much time will it take? When can you finally start to earn?

How Much Time Does it Take to be a Web Developer?

It takes around 5 to 6 months to learn web development from scratch. This is if you spend a few hours studying every day. Some people learn in just a few months.

We suggest starting with basics and having a broader knowledge so it is easier for you to decide if you want to be a front-end developer or backend developer or a little bit of both. But if you have a clear decision, you can skip the first 2 steps and start directly with the core concepts of your field and save a lot of time.

You can attend coding bootcamps or take computer science courses online to get a more dedicated learning plan. But it is also possible to develop your skills on your own by watching YouTube tutorials and practicing on some open GitHub projects.

Whether you are learning full-time or part-time, it is important to keep practicing every day. We recommend learning practically. Instead of spending time mugging up the concepts, start building a website and learn the concepts and code fundamentals along the way. The more you apply your knowledge, the more you will learn.

What languages should a new web developer learn?

When it comes to web development, the three most basic languages to learn are – HTML, CSS and JavaScript. With a good technical base in these three languages, you can develop a functional website. Other programming and scripting languages like Ruby or Python are also a good option if you are more interested in backend web development.

Do you need a degree for a web developer job?

No. You don’t need a degree in computer science or web designing. Although having a 4-year degree is helpful, it is not necessary for web developer jobs. In fact, there isn’t any requirement for formal education to get a job in the web development field. All you need is knowledge and expertise in coding. You can independently learn coding languages and develop your skills for a few months and get a job.

Should I become a frontend or backend developer?

Is now a good time to become a web developer?

Now is a great time for becoming a web developer. Starting a career in web development in 2022 is very lucrative. There is a high demand for skilled developers. With constantly evolving tools and technologies, there is minimal chance of a downfall in the job market.

Becoming a web developer is a very lucrative career as of now. But it is essential that you follow the right steps or you will waste valuable time and money.

You have to be open to continuous learning as technology keeps evolving every day. After all, even successful web developers are continuously learning and updating themselves.

A good web developer is a lifelong learner that is always looking to expand their knowledge and skills, year over year.