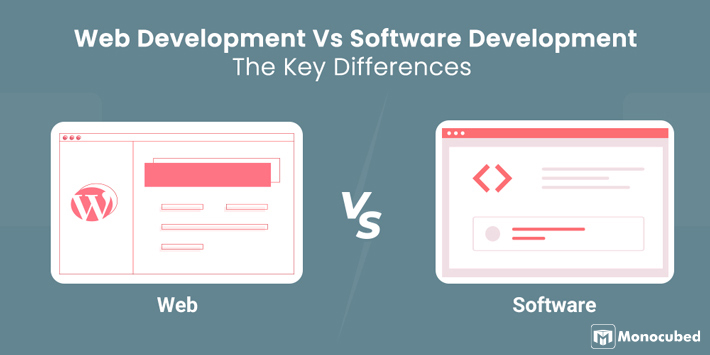 When you are looking to build a career in the tech industry, these are some questions that are in your mind. There are so many job profiles ranging from developers, engineers, designers, scientists, and analysts that anyone can get confused.

In this blog, we compare Web Development vs Software Development, with the aim to clear all doubts between them.

From roles, responsibilities, and different types to salary, and skills required, we cover everything to help you decide your ideal career.

Let’s have a quick look at the differences between web development and software development before we look into each topic in detail.

What is Web Development?

Web development involves developing engaging websites and easy-to-use web applications. As the name suggests, it is the development of web-based programs that you can access through any web browser.

With a free consultation session, you can discuss your idea, get it validated, and start developing with an experienced web development team.

What is Software Development?

Software development is the process of developing computer systems. It includes the ideation, design, coding, documentation, error testing, and debugging of a computer application or system.

Software development is any computer system or program that enables a connection between the device and user. It can be-

There are mainly two divisions of software development – application software(apps for users) and system software(for running a system).

With the evolution of computer technology, there are now many different types of software.

Let’s have a look at the 8 main types of software development today.

Does a software engineer earn more than web developers?

Which is a better career – web or software development?

No field is superior. It depends on the kind of skills you have and the work you would like to do. As a web developer, you will have multiple projects with varying requirements. As a software developer, you will work on a single project for 2-3 years constantly improving it. Consider pay scale, your skills, the requirements of the profile to decide which is a better career path for you.

Are software developers and software engineers the same?

We have covered the key differences between software development and web development in this blog. Now that you have a clear idea about the roles and requirements of both fields, you will know which you prefer for your tech career.

Still unsure which you prefer?

Learn a few basic concepts of both. See which is more suited for your talents and interests. For a clear understanding of what a web developer does and how to become one, check out the blog – 5 steps to become a web developer.