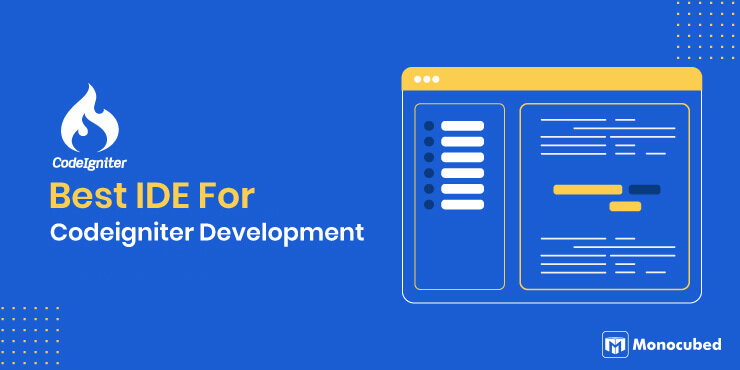 The globe is rapidly moving in the direction of digitalization and building a secure, robust, and scalable web is the ultimate solution to match this pace. With the emergence of new scripting languages every year, usage statistics of PHP for websites depicts its popularity.

PHP development has attracted the advancement of several frameworks like CakePHP, CodeIgniter, Symfony, Yii, Laravel to name a few. If we talk about CodeIgniter, it is extensively used as a framework for robust web application development. To maintain high-quality code, the best IDE for CodeIgniter must be employed.

To help you in choosing the right technologies, we have compiled a list of the best IDE for CodeIgniter development. Let us understand in detail which IDE is the best one for this technology.

What is Integrated Development Environment?

An application that delivers a comprehensive facility to the computer programmers for any software development is termed as an integrated development environment (IDE). It usually comprises build automation tools, source code editor, and debugger.

Some of the IDEs, namely Eclipse and NetBeans, enclose all the necessary interpreters or compilers, or both; and others, like Lazarus and SharpDevelop, do not enclose them.

The border between other parts and IDE of a wide development environment is not clearly defined. Also, at times a version control method or a variety of tools makes simpler the structure of a graphical user interface application. Numerous contemporary IDEs have an object browser, a class browser, and class hierarchy illustration for usage in object based software development.

IDE and Code Editors: The Difference

Due to a few similar features in IDE and Code Editors, it becomes necessary to state the vital differences between them. It seems that when writing the code in a text editor has turned out to be a crucial skill, there are still some baffling aspects that make it distinct elements.

Specifically, IDE for the front-end and back end is a self-sufficient package manager that renders compiling, writing, debugging, and executing codes in that same space.

On the contrary, a code editor is a text editor with a number of characteristics that smoothen the procedure of writing codes, either through optional plug-ins or native capabilities. Normally, IDEs are determined on a single language and have the interpreter/compiler and debugger detailed to that language.

While, the code editor serves a more wide-ranging purpose in their text editor capacities, being competent to function with many programming languages. Its text editor is limited to writing codes and hence, does not surpass this stage.

Both code editors and IDEs share some familiar features such as highlighting sections of code, hints, custom folding of sections of code, and code completion. Selecting between these two technologies is mainly a subject of personal choice, consisting of a particular programming language and its workflow.

CodeIgniter is an open-source model view controller based PHP framework. This software assists developers to make dynamic websites with PHP. On comparing with other PHP frameworks, CodeIgniter is preferable for its speed. In 2008, the inventor of PHP, Rasmus Lerdorf, said at frOSCon that he liked CodeIgniter ‘because it is faster, lighter and the least like a framework.’

With the accessible package, manifold operations like session handling, file uploads, and email sending can be performed. Being loosely based on MVC development pattern, controller class is a basic element of development under CodeIgniter; while views and models are non-compulsory.

It can be altered to exercise Hierarchical Model View Controller (HMVC) which permits PHP developers to preserve modular assembling of models, controller, and view organized in the sub-directory layout. MVC framework helps to fabricate many processes of the web development cycle simultaneously with a proficient design.

MVC is a logical pattern that includes:

8 Best IDE for Codeigniter To Consider For Web Development

PHP Codeigniter tools are known to have perfect IDEs where developers can resourcefully build innovative, engaging, and feature-rich projects. The skills to consider when hiring a Codeigniter Developer must be looked at before choosing the best IDE from the following:

The MVC design of PHP CodeIgniter facilitates the administration of separating code formatting based on data formation and creating HTML code. It needs fewer codes as compared to other PHP development frameworks. Let us have a look at its dynamic properties that makes the course of web development more harmonized:

Talk to us. Get your web app idea validated by experts with thorough research and market analysis.

The reasons to choose Codeigniter framework for your next project are as follows:

Which is an ideal IDE for CodeIgniter?

The IDE named Eclipse is a great choice for PHP project development and works aptly with CodeIgniter. Netbeans is another well-known web development IDE that facilitates to be a better code editor for CodeIgniter.

What is CodeIgniter used for?

CodeIgniter is a PHP framework used to develop rapid web applications. It is based on MVC architecture and provides an exclusive library for connecting to databases and exercising varied operations like managing sessions, uploading files, and sending emails. The total source code for this framework is nearly 2MB. Its inbuilt features are intended to work separately without depending much on the other components.

Which is the best IDE and code editor for PHP?

NetBeans is an admired PHP IDE amongst its developers. Other well-known IDEs are Zend Studio, Cloud 9, Komodo, and PHPStorm. All these four IDEs are commercial. For PHP code editors, Komodo Edit is considered to possess some great features and it also supports several programming languages. Other code editors are RJ TextEd editor for Windows and Codeanywhere editor, a commercial PHP code editor.

An ideal IDE or code editor is considered to be more than just a tool for writing codes. These are some of the best CodeIgniter IDEs easily accessible in the market. Selecting one amongst these IDEs is a challenging task.

Contact us to get professional consultation services for the CodeIgniter framework. We will help you choose the right tools and technologies inlcuding IDE, database, server and libraries for your CodeIgniter web development project.

The front-end and back-end IDEs contain some remarkable tools and features that streamline the whole process of debugging and writing code. Though each one of them has distinctive features but all have a common aim that is to speed up web development with scalable and clean coding.

This makes the time spent on the production of codes resourcefully used to create superior quality code.