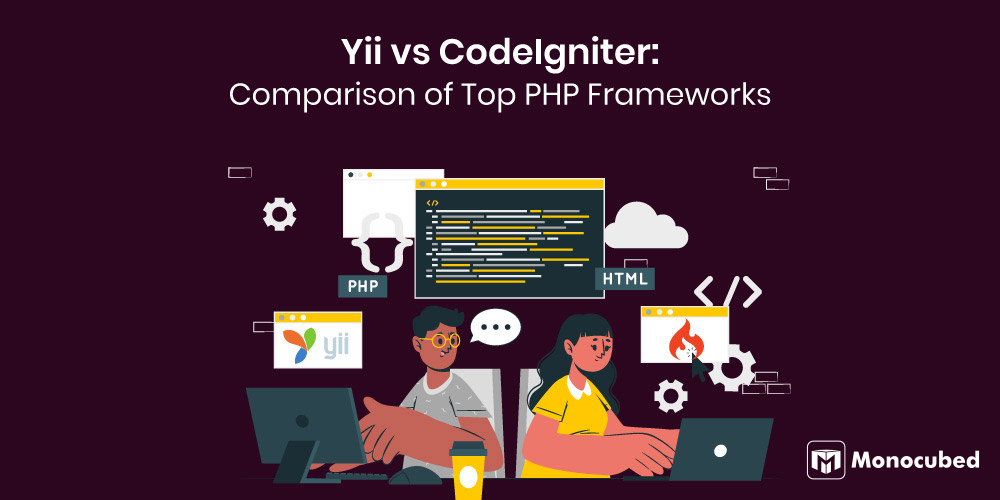 PHP is one of the most popular open-source platforms in the world of web development that enables developers to create a customized PHP web application. On top of that, PHP frameworks make the work even easier and give the utmost flexibility.

There are plenty of frameworks available for developers today. Frameworks contain a set of technical tools that are united together to shape an appropriate solution to make life easier for developing open-source web app development.

That is the reason business owners get confused about which is the best PHP framework they should use and when? To help them out we are going to do a PHP framework comparison between Codeigniter and Yii and check out their abilities, practical capabilities, and performance.

Let’s discuss the Yii framework and CodeIgniter framework and their ability against each other before we directly move forward for its comparison.

You must have read all the basics about what is CodeIgniter framework? And the reasons to choose CodeIgniter is stated in one of our previous blogs.

CodeIgniter has become one of the popular PHP frameworks mostly because of its remarkable originality. Despite having some setbacks in its development, it bounced back with a 3.x version. Not only this, but CodeIgniter is expected to get upgraded and become more advanced with its latest version. The key offerings are:

What is Yii Framework?

Yii, an acronym for “Yes It Is” is a very powerful framework that is based on components and is used for large-scale web apps. It is a popular open-source framework that has faced lots of difficulties in its earlier versions (1.0 and 1.1).

Then in 2014 it fixed many errors and came back with version 2.0 that made huge popularity and many developers started taking advantage of the Yii framework.

CodeIgniter vs Yii: What’s the Difference?

CodeIgniter, a PHP Framework, is an agile and open web app framework with a trivial footprint. It is fuelling the next age of web applications. While Yii, a PHP framework, comes with ActiveRecord, MVC, caching, testing, scaffolding, and authentication, and role-based access control.

It reduces your web app development time considerably. The following table depicts the difference between CodeIgniter and Yii.

Yii vs Codeigniter – Which One is Better?

As we can see CodeIgniter is for beginners developing simple web apps as we discussed earlier. CodeIgniter is a PHP MVC framework whereas Yii is a complete web-based development framework. However, when it comes to choosing one out of them the first choice of many developers is CodeIgniter.

That does not mean that Yii is not preferable, it suits projects that belong to clients having large project requirements and their region is China or Russia. Both CodeIgniter and Yii have unique features and both of them give outstanding performance to their users.

Which one is a better framework CodeIgniter or Yii?

Both frameworks have their own uniqueness if we compare both of them feature-wise. Both provide sufficient features to complete web app development. As a business owner choosing one out of CodeIgniter and Yii depends on your requirement and the development company you choose.

Is CodeIgniter a good framework?

Definitely yes, CodeIgniter is a good and powerful framework. It is built for developers who want to develop web applications using a simple and elegant toolkit. CodeIgniter is considered one of the best options for developing dynamic PHP websites.

Is Yii a good choice for large projects?

Yii is the first choice of the developers over the other PHP frameworks because of its developer-friendly features. Its features are secure, reliable, and easy to configure. It is ideal for websites and web apps that are having high traffic for example web portals, eCommerce portals, or CMS Websites.

Based on our experience and knowledge of customized PHP web app development, we think that both the frameworks have their own individuality and both are performing well according to their users’ needs. Still, you can contact us anytime if you need any further help in choosing the ideal framework for your project.