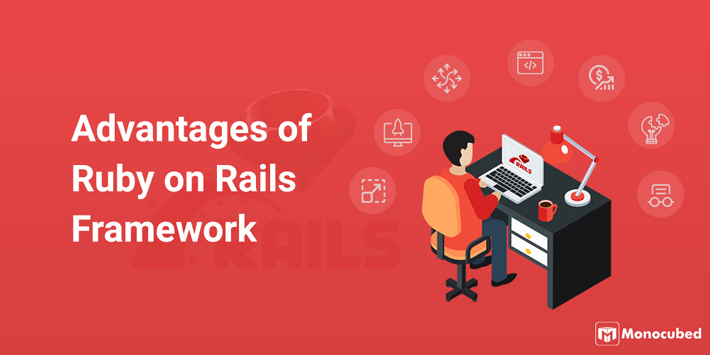 Do you want a quick MVP developed for your investors?
Looking for a framework for developing high-performance robust web apps?

Then Ruby on Rails is for you!

Rails is one of the most popular web frameworks for backend development. In fact, Ruby on Rails is used by 83% of Ruby developers according to JetBrains 2020 Development Survey.

There are many advantages of Ruby on Rails over other frameworks such as high scalability, rapid development, community support, and more.

In this blog, we cover more such Rails advantages in detail to help you decide if it will be a good addition to your tech stack.

Ruby on Rails(RoR) is a robust, pragmatic, scalable web framework that is preferred for both backend and frontend web development. But recently, there have been many discussions about Ruby on Rails –

Each new version of Rails released improves the features and performance of the framework. The latest version, Ruby on Rails 6.1.4, has significant enhancements in terms of security, new gems, scalability, and other new features.

Let’s look at these problems in detail and see if RoR actually lacks these features.

Advantages of Ruby on Rails For Web Development

Now that we have understood that Ruby on Rails is still very much in demand and preferred by a lot of Ruby developers, let’s look at why.

Let’s look at each advantage in detail to understand why RoR is a good option for you.

Use Cases of Ruby on Rails

If you are still not convinced, we have curated a list of some of the most popular web platforms that are using Ruby on Rails in their technology stacks. These giants employ RoR to achieve their business goals and meet their user’s expectations.

Does your Project Require Ruby on Rails?

Why do companies choose RoR for web development?

Some of the key factors which make companies choose Ruby on Rails are the gem of libraries, user-friendly code and well-controlled framework, cost-saving, offers frontend and backend solutions, uses Model-View-Controller (MVC) and DRY that saves time and increases RoR developers’ efficiency.

Can I use Ruby on Rails for eCommerce site?

Yes, Ruby on Rails is excellent for developing eCommerce web platforms. Due to its high-security features, scalability, and performance, Ruby on Rails is a popular choice among eCommerce companies. In addition, The Rails community is very active and provides helpful solutions and Gems that can be seamlessly integrated into your web development project.

Why is Ruby on Rails still the best choice?

Increased developer productivity and rapid web development are the two main reasons RoR is still the best choice for backend development. The Ruby code is very clean and has fewer bugs. The Ruby on Rails developer does not have to spend a lot of time on repetitive tasks. Even existing code is easier to modify and manage in RoR.

This blog lists all the benefits of Ruby on Rails for developing a web app. RoR is a very versatile and robust framework and is used for MVPs, eCommerce platforms, web portals, CMS websites, social networks, SaaS solutions.

Wondering who to approach for RoR web development?Monocubed has a highly experienced team of Rails developers that will understand your ideas and provide scalable, performative web apps. Contact us and get a free consultation to discuss and validate your web app idea.