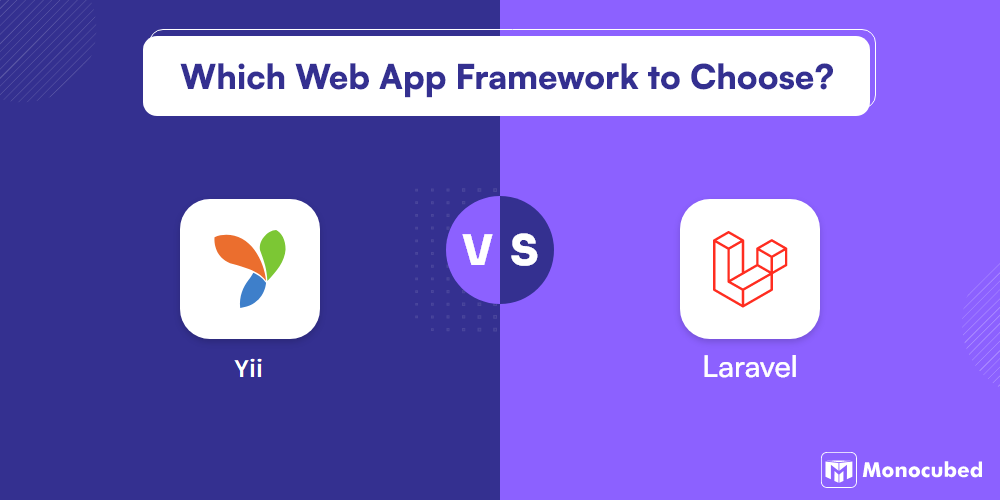 According to JetBrains, 67% of programmers prefer Laravel, and on other hand 6% prefer Yii.

Why such a huge difference?

The reason is that Laravel is one of the most flexible and fast programming languages offering an extensive set of development tools to develop a website effectively.

Among all famous PHP frameworks, Laravel and Yii are the two open-source PHP frameworks that work on the model view controller (MVC) framework. As a top Laravel development company, we have an in-depth understanding of these frameworks.

In the article, we are going to explain the key differences between Yii and Laravel to help you understand which PHP framework is the right choice for your business.

The following table includes the code differences between Yii and Laravel.

Next, learn the meaning of Yii.

The acronym for Yii is “Yes It Is”. Indeed, it is a powerful framework to build scalable web apps. Yii framework is an open-source, lightweight PHP framework used to develop modern web applications smoothly. It works on MVC architecture. Overall, this framework accelerates the web development process.

So, the meaning of Yii is clear. Want to know more about this PHP framework? Check the primary features of the Yii framework.

Here are the core features of Yii to consider while choosing a PHP framework for web app development.

Yii offers numerous online tutorials to provide excellent support to web developers. Also, there is wide community support for developers in this framework.

If you compare the project setup of Laravel and Yii, Yii scores more than Laravel. Though both these framework follows a simple installation process, you just need to download the software and run the application with Yii.

The security feature is one of the top reasons to choose Yii over other frameworks. This fast, robust framework helps you build a more secure web app and prevents your application from cyberattacks.

Yii offers robust support for MVC and adheres to norms when defining its files. It does not frequently announce issue updates like other frameworks, therefore it is using its enduring version 9.0.x.

Installing Yii is simple because the composer controls the installation process. It will help you to save time by offering faster installation and configuration procedures.

Yii is well-known for its ability to be customized to a user’s demands and offers the limitless extensibility of each component of the framework. Even, it manages an OOP framework and makes use of some of PHP’s sophisticated features, like anonymous functions, SPL classes and interfaces, and static binding.

When to Choose Yii for Your Project?

Choose the Yii framework when you are planning to create web portals, eCommerce portals, or CMS websites.

When NOT to Choose Yii for Your Project?

You should not choose this framework if you are a new developer as Yii doesn’t provide enough room for newbies to experience. This open-source framework demands more knowledge of PHP. Now, let’s move to the next framework i.e. Laravel.

Even, being a Laravel developer, use the best Laravel development tools to deliver the top Laravel web app. Easily install this framework by using Laravel installer or PHP package manager.

Planning to Build Your Web Solution in Laravel?

Consult our experienced Laravel consultants. Having experience in developing 50+ web solutions, our team will help you to develop cost-effective web solutions for your business.

We have discussed what is Laravel framework. Now, let’s move further toward the core features of Laravel.

It’s no secret that Laravel is widely used by PHP developers for complex web applications. The following list will explain its important features to help you know why the Laravel PHP framework is a great choice for large-scale software development projects.

Laravel is popular for its in-built lightweight templates used to create intuitive layouts through dynamic content seeding. These templates have been designed to simplify the development process for Laravel developers.

Another great feature of Laravel is ORM which enables developers to write database queries with ease. Laravel is the right choice when faster web development is required.

Testing plays an important role before deploying an application to ensure that it is free of errors. Laravel is the right choice for unit testing by web developments. This framework can run multiple unit tests to ensure that your web application is bug-free.

Among all PHP frameworks, Laravel comes with pre-installed libraries. It also offers numerous other object-oriented libraries.

When to Choose Laravel for Your Project?

You are advised to use this framework for eCommerce websites, web applications, CMS, and ERP. This framework is suitable to develop complex applications because of its queue system and extensive documentation to accelerate processing.

When NOT to Choose Laravel for Your Project?

Being a new framework, Laravel is quite slow for web developers to deal with. It is advisable to avoid using Laravel if you are a new developer as you may face problems while extending codes. The documentation is quite complex to understand for the new developers.

Now let’s check the in-depth comparison between Yii and Laravel to help you understand their core differences in a better way. We have tried to explain it in detail to make it easy for you to understand.

In-depth Comparison Between Laravel vs Yii

This in-depth comparison of Laravel vs Yii will help you understand the major differences between these frameworks. Let’s have a glance at these core differences.

Laravel – The learning curve of Laravel is quite steep as it is hard to learn for a newbie. This framework has a slow speed when it comes to considering data collection and communication.

Yii – Yii is quite simple to learn and understand. Any developer can learn this framework through the documents of Yii.

In comparison to Laravel, Yii is a better choice in terms of the learning curve as Laravel is quite complex to learn.

Laravel – Laravel allows web developers to verify the validations at any point in time as it works on object-relational mapping (ORM).

Yii– The form validation process takes a lot of time in the case of Yii in comparison to Laravel due to the restriction over scenario-based validation.

Laravel – Laravel doesn’t include CRUD GUI out of the box, developers require to use 3rd party CRUD generators Laravel like CRUDBoosters, Craftable, and LaravelCRUD Generator.

Yii– Yii has easy to use Gii tool permitting prototyping by generating utlised code fragments or complete CRUD controllers. Developers can easily generate required snippets via a web interface. Also, a command-line interface is also available for the devs who prefer to work through the console.

CRUD plays important role in developing web apps as well as making the app proper functioning and interactive with end-users.

Yii– As Yii is older than Laravel, this framework has more web developers all over the world, making Yii the larger community in comparison to Laravel.

Yii beats Laravel when it comes to considering community support.

Laravel – In comparison to Yii, Laravel has perfectly structured documentation. It is written in a generic way to developers to understand it easily.

Yii – Yii doesn’t have organized documentation, as a result, you can only start basic coding with Yii. To gain additional knowledge experienced developers require to spend more time in research.

Laravel – As web developers need to utilize the extensions to access tools, it is not the right choice considering security features.

Overall, if you are looking for higher security and performance go for Yii. On the other hand, Laravel offers exceptional performance, enhances traffic management, and offers a wide range of libraries for the developer to use. If you are planning to build such a solution, go for Laravel.

Have a Web App Idea for Your Business?

Confused where to begin? Don’t know how much it will cost? Wondering if it will be successful? Talk to our professional web app consultant.

Still confused about which is the best PHP framework for your brand or business? Read out the following frequently asked questions to get all the answers.

FAQs About Laravel vs Yii

What is the Yii framework used for?

What is the core purpose of using the Yii framework?

Yii is a high-performance framework for rapid development. The core purpose of using the Yii framework is to enable maximum code reusability and speed up your backend development process.

Which framework is suitable for web development?

Laravel is the best choice among all the web development frameworks.
Choose this framework, if you are planning to develop a large-scale web application. However, choosing a particular framework is challenging as it depends on your project requirements, budget, and business goals.

Laravel vs Yii? What to Choose?