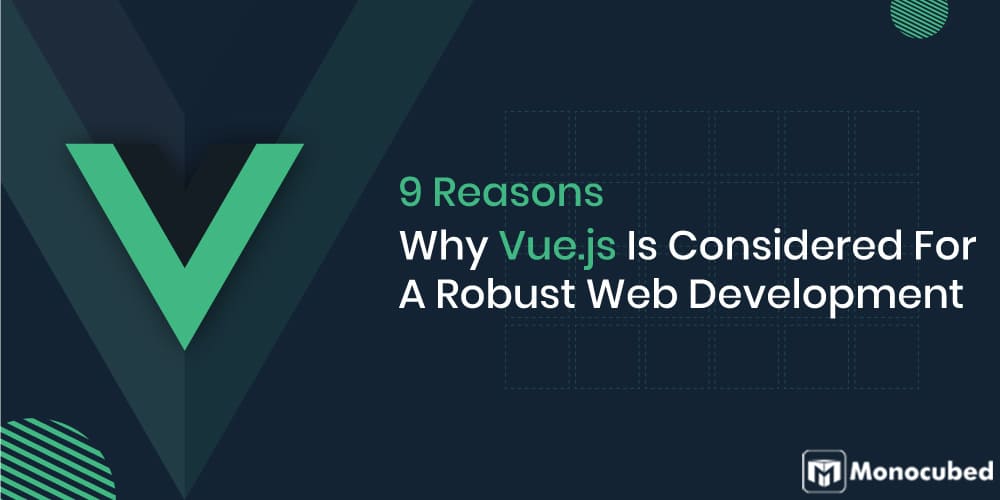 Vue is a flexible technology that you can use in application development without utilizing numerous resources.  With 180k stars on GitHub, it is a progressive JavaScript framework employed for developing any user interface.

In this blog, we will understand why Vue js is gaining popularity amongst web development frameworks.

As compared to other monolithic frameworks available in the market, Vue is tremendously adaptable.  This means that you do not have to understand all the concepts in-depth.  Within a short period, it has attained much attention from web developers.

Let’s examine the concept and growing fame of Vue.js.

Vue.js is a front-end JavaScript framework made by Evan You and preserved by him and his active team members.  It is an open-source framework for developing single-page applications and user interfaces.  Vue.js has an incrementally flexible design that emphasizes component composition and declarative rendering.

This model-view-view model (MVVM) has a core library that is focused on the view layer.  Progressive characteristics needed for multifaceted applications such as state management, routing, and tooling are presented via formally upheld supporting packages and companion libraries, with Nuxt.js as the most prevalent solution.

Vue.js permits you to encompass HTML with HTML traits called directives.  These directives deliver functionality to HTML apps and come as either user-defined or inbuilt directives.  Vuejs frameworks supply the following comprehensive collection of features that makes it simpler for developers and business enthusiasts to arrive at the UI ecosphere:

With Vue, you can develop a super-fast, high-performance website that attracts your users. Interested? Book a free consultation with us today.

Why Vue.js Is Gaining Popularity?

Vue.js key focus is the view layer which creates the framework easy to integrate into present projects.  It is also a good choice if you are developing a refined Single-Page Application (SPA), provided that you conglomerate it with contemporary tooling.

As per Stack Overflow Developer Survey 2019, Vue is the second most valued framework.

Below are the reasons stating why Vue js is gaining more popularity:

When to Choose Vue JS?

With efficient tools like Vue CLI 3 and Vue UI, Vue is outstanding for the rapid delivery of start-up ideas and MVPs.  It has an easy learning curve and is a cost-effective solution for small-scale to medium-scale apps.

Below mentioned are some of the best-suggested situations stating when to choose Vue technology:

We are interested. Be it a simple web app for your startup or a complex enterprise solution, our Vue developers are experienced. Let’s discuss your idea.

Who Is Using Vuejs Framework?

According to the State of JavaScript survey, the number of web developers who use Vue and would utilize it again raised from 19.6% in 2017 to 28.8% in 2018.  In that same survey, it received 91.2% of the maximum gratification rating among its users.

Because of Vue’s exceptional frontend features and capabilities, several reputed and big brands across the globe have been utilizing this framework.  Top companies like Grammarly, Alibaba, Xiaomi, Reuters, and Laracasts have gained many benefits by adopting Vue.js technology.

You may browse through numerous websites, UI components, templates, plugins, and anything that is built with Vue to get a better understanding of Vue’s finest characteristics.  As for backing up in the backend portion of the ground, Laravel, a PHP framework, endorses utilizing Vue.js for the front end framework, though it is not an obligation.

Why Vue js is used?

Is Vue easy to use for web development?

Vue is lightweight and easy to ]write. Owing to its use of components and familiar templating syntax, migrating or integrating into current projects to Vue.js is smoother and faster. Hence, Vue is an excellent choice for start-ups but can be utilized in large-scale apps.

Is Vue.js better than React?

From Vue vs React, we can analyze that the documentation of React is good but Vue’s documentation is generally considered better. Vue is easy to learn as compared to React. Vue.js separates the concerns in a manner that web developers are used to, decoupling CSS, JavaScript, and HTML. It also permits the usage of JSX for those who desire to adopt this styling paradigm.

From the mentioned reasons stating why to use Vue.js, it is clear that it has a progressive framework.  It uses MVVM architecture and is much flexible.  Contact Monocubed for building cost-effective simple as well as complex applications with the Vue.js framework.

Vue offers several ways to utilize transition effects and has comprehensive documentation.  It has a rich environment with magnificent tools like Vue Router for single-page apps or Vuex for state management.  This framework has a simple construction.  It makes the learning curve of Vue easy hence, makes it simpler for users to trace and remove errors in the coding background.