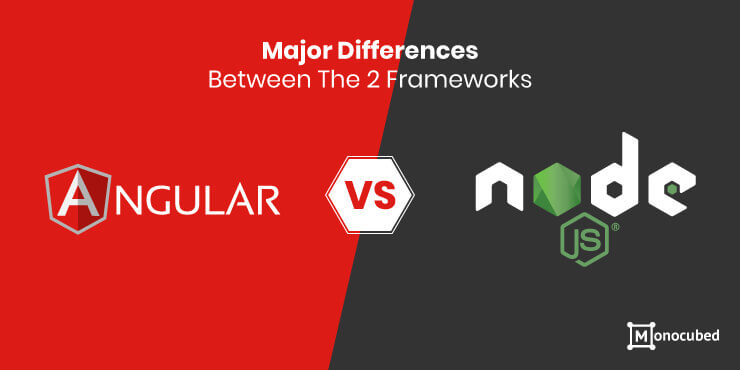 According to a 2020 developer survey, JavaScript is considered to be one of the most popular technologies.

Various frameworks are available in this web world and the strife between Nodejs vs Angular in this blog would help the developers in selecting the right one for the required website.

Node.js is an open-source platform that allows developers to employ JavaScript for writing command line tools.

But Angular suggests the usage of Microsoft’s TypeScript which comprises annotations and static typing that has generics.

Let us understand the concepts and dissimilarities in Node js and Angular.

Node.js is an event driven JavaScript framework that can run on various platforms namely, Linux, Mac OS, Unix, and Windows.

It allows developers to use JavaScript for running scripts server-side which aims at producing vigorous page content before that page is conveyed to the browser.

It has an event-based architecture that is capable of asynchronous input and output (I/O) process.

Such a design choice aspires to enhance production and scalability in applications with several I/O operations, also for actual time applications.

In general terms, Node is a cross-platform JavaScript framework and perfect for building data-intensive, scalable, and server-side applications.

In Django vs Node.js, we gauged that the performance of Node.js is good, as it permits web developers with more liberty when it comes to implementations and is less complicated than Django.

Below are some of the vital features that can make software developers choose Node.js for their app development.

Talk to us. Start developing a lightning-quick web app that is scalable, integrable and affordable.

Its processing model is established on JavaScript event-based form with JavaScript call-back method. Below is the diagram of Node.js architecture stating the function of a server that is built utilizing this framework.

Angular is a platform for developing single-page applications with the use of TypeScript and HTML. It is written in TypeScript and applies optional and core functionality as a collection of TypeScript libraries that are imported into the apps.

This open-source front end framework is managed by the Angular Team of Google and the community of corporations and individuals.

Angular frontend application is described by a collection of NgModules. Here, the fundamental building blocks are the NgModules.

The structural design of Angular application depends on some elementary concepts. They gather related code into well-designed collections.

These applications will always have a root module that will enable bootstrapping and usually will have many feature modules.

There are some of the imperative features that make developers choose Angular as their web framework are as follows:

Angular is used for developing client-side applications in HTML and TypeScript. It contains a number of libraries for both JavaScript and TypeScript, of which some are core and some are optional.

Angular applications can be written by creating HTML templates along with mark-up, a component class that administers these templates, in addition to application logic incorporated in services, and boxing services and components in modules.

By bootstrapping this root module the application can be launched. Then the framework takes over and presents the app content in the browser. Also, it responds to the user interaction in accordance with the instructions that are provided.

Below is the diagram of Angular architecture that describes the main eight building blocks of an application:

Components are here to define views, which are collections of elements that Angular can opt and alter as per your project data and logic. Then the components utilize services, which supply particular functionality and are not directly connected to views.

These service providers are supposed to get injected into components as a dependency, building your code efficient, reusable, and modular.

Here, Services and Components are merely classes, at times with decorators that mark its type and give metadata that inform the framework how to employ them.

Node.js vs Angular: The Major Differences

Both Node.js and Angular are dissimilar and unique in many aspects.Each one of these technologies has its specific features and advantages.

Node.js is primarily utilized for scripting server-side to develop the backend of web apps. While Angular is one of best frontend JavaScript frameworks used to create responsive web application interfaces.

Since both of the frameworks have a prominent stake in the industry, a detailed difference between Angular and Node js would let you understand some major comparisons.

Create a rich user experience with real-time interaction and attractive graphics with our experienced Angular developers.

When to Prefer using Angular?

Angular Framework can be used for:

When to Prefer using Node.js?

Node.js framework is the best alternative:

Why do we utilize Node.js with Angular framework?

Angular or Angular 2 is entirely scripted in Typescript. The browser does not comprehend Typescript, so compilation is done in plain JavaScript framework. The use of Node and Node Package Manager (NPM) is required to accumulate them into JavaScript files, so that deployment can be done in the process.

Many Angular libraries or packages at GitHub repository are dispersed as diverse NPM packages. This NPM is immensely dependent on Node.js framework.

Which is better Node js vs Angular?

Angular can be utilized for building single page applications and applications that have separate functional layers. It is a client-side, open-source framework launched by Google in 2009. While Node.js is an open-source scalable server-side framework and runs on Windows, Linux, Mac OS X, and Unix.

The above-stated strife between Angular vs Nodejs states precisely that Node.js having features of non-blocking I/O model and event-driven can make it preferably efficient and lightweight when compared to Angular.

Is Node.js a framework or language?

Node.js is a cross-platform framework and not a programming language. It utilizes JavaScript programming language as its main interface. It is a desktop web application that executes JavaScript files. It primarily reads and then writes the files on a server or computer or does the networking. Its runtime environment is an app that is established in C++, allowing users to manipulate the files on the system.

From comparing the difference between Angularjs and Node js, we can gauge both the frameworks contain their unique characteristics and differences that help in developing dynamic web apps.

Angular is one of the popular web frameworks and it usually supports detailed documentation; which can benefit the JavaScript developers for finding technical solutions and solving emerging problems instantly.

On the other hand, Node.js can be more advantageous for simple web development of scalable web servers and applications.

Contact us, to figure out the apt framework for your business, and employ its unique functionalities.With both these JavaScript frameworks, developers can build scalable web applications by incorporating their peculiarities.