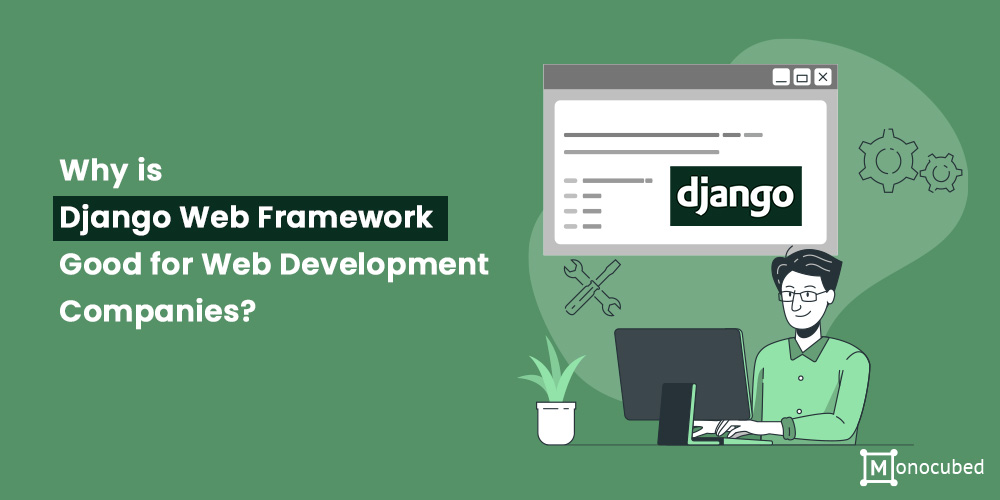 Before starting a web project, it is important to choose the right language and tools. Web libraries and frameworks play a massive role in defining your web application or websites’ scalability, performance, speed, and user experiences.

While frontend frameworks take care of the look and feel of your web application, languages like Python govern the backend development. Python is simple to use and provides extensive libraries to increase developer’s productivity.

Django web framework is the most popular Python-based framework, according to the 2020 JetBrains Developer’s Survey which surveyed more than 19,000 web developers.

Before we start any project, we explain all the technologies we use, including Django, to our clients. In fact, our Python web development services include technology consulting. We sat with our technology consultants and found out why Django framework is prominent in our project tech stacks.

So here is a list of top 8 reasons why Django is the right choice for your company’s web project.

It follows the Model View Template (MVT) architectural pattern. It separates the code into three distinct parts – Model, View and Templates. The developers just have to code what should be displayed to the user and Django will take care of all the background details.

Maintained by the Django Software Foundation, the primary goal of Django is to ease the creation of complex, database-driven websites.

It has a wide array of usage, spreading from eCommerce applications to the Fintech industry, and can be used for machine learning implementations, and mobile and game development.

Why Is Django Right for You?

Django is one of the top choices for many business giants. It is an all-in-one framework that suits any type of web development project be it a startup-level MVP or a complex enterprise-level app. With many advantages such as MVT architecture, automatic admin panel and powerful database support, its popularity is not surprising.

Which companies are using Django currently?

Along with companies, there are many freelancers and experienced developers who work with Django regularly. The Django community is very vast and helpful. Django has 59.4 K stars on GitHub with 2090+ contributors.

Some advantages of using Django are –

Get a cost-effective, secure, integrable Django solution that is customized according to your needs. Talk to our Django expert for free.

Let’s discuss each of the above-mentioned advantages in detail, to understand better how Django is a right fit for your business.

What Are the Disadvantages Of Using Django?

Although a Django application for your organization comes equipped with several advantages, there are also some limitations to what it can do. Although most issues can be resolved with some careful coding, it is important to consider these drawbacks.

As discussed, Django is a powerful framework that can increase the productivity of your development team. While there are some limitations and drawbacks too, the framework is packed with splendid features.

There are many advantages that make it the perfect choice for streamlining your web app development process. The Django community is also quite active and helpful and will solve any problems you might face.

What are web frameworks?

A web development framework is a tool designed to support the development of web applications including web services, web resources, and web APIs. Some popular web app frameworks are Ruby on Rails, AngularJS, Node.js, Laravel, Sinatra, Flask and Django.

What is Django used for?

Django is one of the most popular Python web frameworks that encourages rapid development of secure and maintainable websites. It provides a plethora of features to add standard functionalities to any kind of web application. It is easy to maintain, debug, and keep up-to-date with new releases and thoroughly detailed documentation.

Is Django good for web development?

Google, YouTube, NASA, Instagram are some of the top companies around the world that use Django for web development. This is largely owed to its robust and pragmatic design with robust features such as ORM, Django templating language, scalability, flexibility, Django admin panel and the simplicity of Python

Django Python framework is an ideal choice for the development of large-scale web applications. Your company should utilize the powerful features of this Python framework to digitize and market your products.

Want to add a highly effective Django web app for your product?

Monocubed is a professional Django web development company with experience in converting business plans into high-performing customized web solutions. You can reach out to us anytime to get assistance with your Django product.

If you liked reading this blog, check out some of our top blogs on web development.