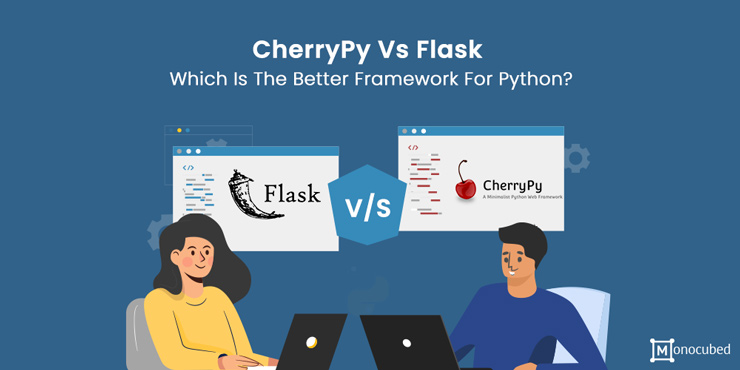 When it comes to backend development, Python is one of the best programming languages to use. Many Python web frameworks are available in the market, ranging from robust, batteries-included frameworks, such as Django or Web2py, or lightweight micro-frameworks, such as Flask, CherryPy, and Pyramid.

As a Python development company, we have hands-on experience using these frameworks. We bring you a comparison of two such microframeworks. Flask is the most popular Python web framework after Django, while CherryPy is one of the oldest web application frameworks. This CherryPy vs Flask battle will assist you in deciding which framework is suitable for your product.

CherryPy VS Flask – A Comparison Table

We have curated a comparison table for you to quickly peruse through before we look at these frameworks and their individual features in detail.

Now let’s look at what CherryPy and Flask are, and their important features and attributes.

CherryPy is a Python-based web application framework used for rapid development. The official site calls it “a minimalistic, Pythonic, object-oriented web framework” that is used for wrapping over the HTML protocol. You can build web apps in less time with smaller and cleaner codes.

Developed 10 years ago by Remi Delon, the framework is one of the oldest Python frameworks that remains relevant and keeps updating itself to match with the growing community. Some features provided by CherryPy that makes it widely beloved are-

Flask is a micro Python web framework that aims to keep the core simple and easily extensible.

You can use this web app framework to compile modules and libraries and write a high-functioning web app. Flask is pythonic in nature, using explicit methods to remain as close to the working of the programming language compared to other web frameworks.

Flask is the perfect combination of flexibility and structure. It gives you tools and utilities that assist you in speedy development but gives you the flexibility to choose your database and template engines and servers.

Features that make Flask one of the top micro-frameworks are –

We are interested. Be it a simple web app for your startup or a complex enterprise solution, we can help develop it.

Flask VS CherryPy – Differences Between The Python Frameworks

CherryPy OR Flask: What to Choose?

Do all developers face this question of – Flask or CherryPy? Both the Python web frameworks are quite close to each other. The main difference between cherrypy and flask is the popularity. Flask enjoys massive support from a huge community of developers. Due to its popularity, Flask invariably is much more mature even though it has fewer years in its name.

When to Use Flask?

The popularity of Flask is due to the ease with which it can be used, engaging vanilla HTML and Python. With very few lines of source code, you can have a working application.

When to Use CherryPy?

CherryPy is an underrated gem of Python web tools. Each Cherry application can work as a stand-alone Python web application as it has its own multi-threaded HTTP development server. We recommend CherryPy for –

No, it is far from being dead. It is a mature framework that is designed for specific use cases. Thus, it may not have as much popularity as other Python web frameworks but it is still widely used for application development.

Is Flask a frontend or backend framework?

Flask is a backend framework. It is a minimalistic microframework and does not include a database abstraction layer or form validations. It lets the developers decide their choice of tools and libraries. JavaScript frameworks like Angular will help you develop the best frontend for Flask applications.

Is Flask better than Django?

Flask and Django serve different purposes. Flask is easier to use and is suited for projects on a smaller scale. If you require something more robust with out-of-the-box features and large-scale implementations, Django is a better choice for you. For more details, you can read our blog on Flask vs Django

CherryPy and Flask are two extremely useful frameworks for Python development projects. With this blog, we have brought to you a comparison of Flask vs CherryPy, analyzing the difference and functionalities of both.

Contact Monocubed for receiving guided assistance through the development process. Our team can help you find the right fit for your company. For more such blogs, you can subscribe to our newsletter.