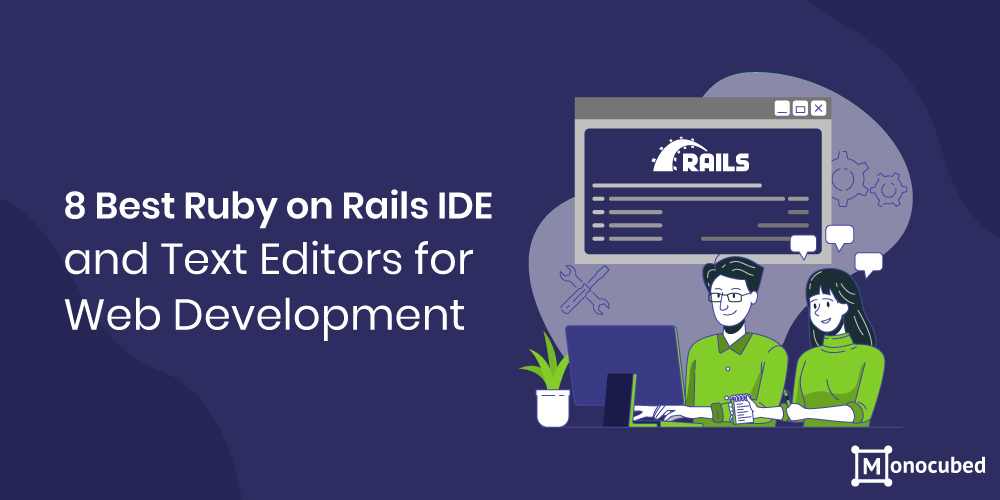 Ruby on Rails usage statistics depicts that it is a powerful and popular backend framework for web development companies. Writing code in Ruby is easier compared to the rest of the programming languages.

In fact, Ruby acquired its popularity only after the Ruby on Rails framework became prevalent. Developers across the globe use Rails for rapid web development of user-driven, high traffic websites and web apps.

Ruby on Rails IDE is all you require to begin your programming expedition with the Ruby on Rails web framework.

There are several IDEs that are accessible in today’s market, both paid and free, and choosing one is time-consuming. To help you, we have curated a list of the best IDE and Editors for Rails development.

Let’s first take a closer look at the RoR concept, understanding what it is and why developers use it. We will then look at some of the popular Ruby editor and IDE.

IDE is a software application that delivers wide-ranging services to computer engineers and programmers for software development.

An IDE generally contains at least a debugger, a source code editor, and build automation tools. Some of the IDEs, like Eclipse and NetBeans, comprise the essential interpreter, compiler, or both; others, namely, Lazarus and SharpDevelop, do not.

The border between a full featured IDE and other software development tools like a code editor is not defined; occasionally a version control system or several tools to streamline the creation of a graphical user interface (GUI) are incorporated.

Many contemporary IDEs have a class hierarchy diagram, a class browser, and an object browser for usage in object-based development.

Ruby on Rails (RoR) is a server-side web app framework written in Ruby under MIT License.  It is a model-view-controller (MVC) framework, supplying default structures for a database, web service, and pages.

It reassures and simplifies the usage of web standards like XML or JSON for data transfer and CSS, HTML, and JavaScript for user interfacing.

Some popular companies that use RoR are Groupon, Shopify, Netflix, Github, and Airbnb, to name a few.

RoR is one of the most popular web frameworks employed for developing an application that is faster than a Java framework.

Also, Rails give emphasis to the practice of other well-known software engineering paradigms and patterns, such as the-

Some Benefits of Using Ruby on Rails Framework

The procedure of programming in Rails is faster than the rest of the languages and frameworks, partly due to the object-oriented trait of Ruby and the massive collection of open-source code accessible within the community.

The active RoR community provides Ruby Gems for almost all kind of tasks. These libraries are open source and so dissimilar to other commercial development frameworks.  Also, it has absolutely no licensing costs.

Apart from cost-saving, the framework is also known to be highly productive. The Ruby on Rails code is readable and self-documenting. This enhances productivity, as there is less requirement to write out distinct documentation.

Every project is standardized and tends to abide by the same coding practices and structure.

Rails is extremely good for rapid application development (RAD), as this framework makes it easy to accommodate any alterations. Rails has built a sturdy emphasis on testing and has a decent testing framework.

Owing to these features, the framework is mainly used by startups and small businesses who require quick and secure results.

8 Best Ruby on Rails IDEs to Use


Have a Web App Idea in Mind?


Which IDE Should You Use For Ruby on Rails?

Your developers are going to devote much time to opt for the required editor for your Rails web development project.  Hence, it is imperative to utilize an editor that you are comfortable and productive with.

Most of the editors and IDEs mentioned above for Ruby development are either free or give a free trial version. It is always helpful to try out a few of them before you opt for one.

Here are certain things that you should consider before selecting the best text editor for Ruby:

These were some of the best code editors for Ruby on Rails that can increase developers’ productivity in building applications.

Still, if you have some queries or questions, here we have answered some frequently asked questions. Feel free to reach out to us for further information.

What IDE should I use for Ruby on Rails?

You can use RubyMine if you want a graphical user interface debugger for Ruby, CoffeeScript, and JavaScript. It has the competency to allocate breakpoints to debug code. Also, you can opt for Aptana Studio that provides integrated support with Rails. It comprises tree-structured code representation and can easily inspect variables, and control execution.

Is there a difference between Ruby and Ruby on Rails?

Is Python similar to Ruby?

Ruby is a universal-purpose programming language that is frequently compared with Python when it comes to an easy understanding of syntax and readability.

With Ruby on Rails, developers can develop a wide range of websites and web apps that are scalable, fast and integrable. But to simplify the web development process, an IDE or code editor is useful.

Ruby requires feature-rich good Ruby on Rails code editors like Atom, Vim, Emacs, or Sublime Text.  A full-featured IDE namely Eclipse for Java is not actually needed for the maximum of the projects.

Contact Moncocubed, to get a free consultation with IT experts. They will help you validate your idea and suggest the right tools to start your project. Our developers can also assist you in converting your idea into a high-performance web app.