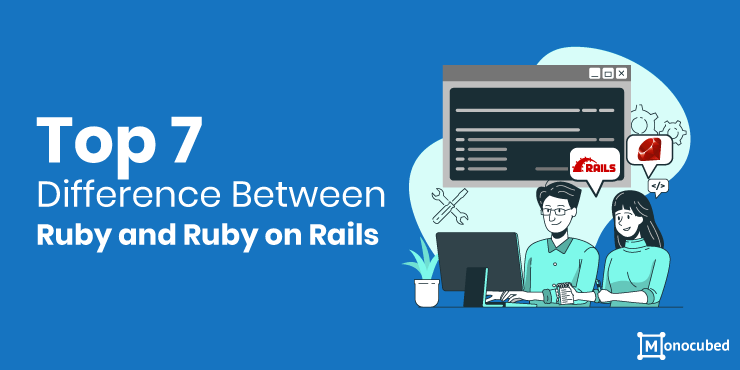 In this digital era, we have numerous scripting languages and web development frameworks to employ for web development.  Selecting the best one amongst these available frameworks for your development platform is the prime decision.  From 2005, the interest in a programming language called Ruby hiked with Ruby on Rails web framework which is written in Ruby.

With mounting usage of Ruby for websites, Rails is repeatedly being endorsed.  To know whether to opt for the Rails framework, we must first understand the difference between Rails and Ruby.

Ruby is a high level, interpreted language, designed by Yukihiro Matsumoto in the mid-1990s.  It has the ability to run on various platforms like Mac OS, versions of UNIX, and Windows.  While if we talk about Ruby on Rails, it is an open-source framework developed by Heinemeier Hansson in 2003.  It is written in Ruby and can run on different platforms like Macintosh, Windows, and Linux.

Ruby is an all-purpose programming language based on object-oriented notions.  It is an elucidated language exercised to invent web applications at an elevated pace.  Ruby is an open-source that is written in C language and is free.  With a stable release 2.7.1, it is more composed and apparent, having a lucid sentence structure.

ts syntax is quite similar to Perl and its semantics are related to Smalltalk, but it varies significantly from Python.  It supports manifold programming models, including object-oriented, functional, and procedural programming.  To avail an analytical view on Ruby vs Rails, we must examine its characteristics individually.

Ruby is object-based, which means each value is an object, consisting of instances of types and classes that a lot of other languages delegate as primitives.  Variables constantly seize references to the objects.  Generally, Ruby seems to abide by the ‘Principle of Least Astonishment (POLA)’, which means that it must function in a way to diminish confusion for skilled users.

To understand it, let us have a look at its features:

A Brief: What is Ruby on Rails?

Ruby on Rails is one of the most popular web frameworks; built on a model view controller (MVC) pattern, supplying default structures for web services, databases, and web pages.  Rails is a server-side application framework, which is written in Ruby under MIT License and created by David Heinemeier Hansson.  Moreover, the comparison of Ruby vs Ruby on Rails would entail their key characteristics.

Theoretically, it is described as the package library known as RubyGem, which can be installed by utilizing the command line interface of an operating system.

It is an open-source framework, which facilitates Ruby on Rails developers as a time-saving choice to produce code.  It has a compilation of code libraries, which present handy solutions for recurring tasks like developing forms, tables, or menus on the site.  It supplies command-line scripts for performing snippets of Ruby code remotely.

It incorporates Ruby programming language with HTML, JavaScript, and CSS to build web apps that perform on web servers.

Features of Ruby on Rails

Many languages like HTML, JavaScript, SQL, and CSS, do not support both front-end and back-end.  Conversely, Ruby is a programming language that encompasses both these ends and permits the developers to develop an inclusive web application.  With its constant updates and stable release 6.0.3.1, Rails has reformed the web development planet through its realistic approach.

To know, ‘What is Ruby on Rails used for?’, let’s discover some of its features that provides various services:

The Difference Between Ruby and Ruby on Rails

One of the most popular programming languages, similar to Java or C, Ruby is an all-purpose language, best recommended for its advantages in web programming.  On the contrary, Rails is the software library, which broadens Ruby language.  Let’s observe Ruby vs Ruby on Rails in detail:

After understanding the concepts and detailed comparison on Ruby vs Rails, let’s examine the pros and cons of each of this technology.

Ruby is an open source programming language that is widely used for developing vigorous services and web applications.  It has been an ideal option for the developers, as it offers the capacity of blending with other technologies.  According to BuiltWith, Ruby holds third place if we talk about programming language usage distribution.

Pros and Cons: Ruby on Rails

In Ruby vs Ruby on Rails, the former aids in exercising diverse databases that split the process between two duplications.  This, in turn, supplies services and performance augmentation for scaling.  Its developers can notice dissimilar database support as an enhancement in constructing their app design.

Evaluation: Ruby or Ruby on Rails

On observing Ruby on Rails vs Ruby, Rails render more rapid programming processes than various systems and dialects.  Its structure makes it simple and quick to adapt changes while forming any application.

The big companies that use Ruby on Rails are Shopify, Zendesk, Github, Netflix, Airbnb, to name a few, are thriving in 2021.  Rails is largely utilized due to its structure, which displays its key characteristics.

Is there a difference in Ruby and Ruby on Rails?

Yes, Ruby is a language, whereas Ruby on Rails is a web framework written in Ruby. The former is dynamic, object-oriented, and an interpreted scripting language. The latter is an open-source website application framework that functions in Ruby.

Which is better – Python or Ruby on Rails?

On comparing Ruby on Rails vs Python, if you are aiming to build web applications, then consider Ruby on Rails. Its community is huge and they are always updated. If you are keener in developing applications, but would want to study a programming language that is more broadly applicable and capable of managing data analytics, then you may prefer Python.

You can utilize Ruby on Rails dramatically in different fields. Owing to the constant updates and stable release 6.0.3.1, RoR portrays a bright future. Ruby on Rails development companies empower their web applications, which is beneficial for both, start-ups and reputable enterprises. For example, like Groupon and Shopify, you can aim to form a new e-commerce project, or like Slideshare and Airbnb, you can revolutionize your platform.

Every technology has its own strengths and drawbacks.  From the above differences between Ruby and Ruby on Rails, it can be seen that both the technologies have a dynamic pace in the industry.  On quite a few specifications, framework or programming is meant to be observed for building the applications as per the needs of end-users.

If you prefer this framework due to its enormous characteristics, contact us and avail dynamic Ruby on Rails web development.

Being convenient, Ruby programming language is known as one of the chief programming dialects of the globe.  The rising popularity of Ruby on Rails is a perfect answer to the most asked question, ‘Is Ruby on Rails dying?’  Both technologies are free of cost, open sources, and easily available.

Their sustainability has been supplied by huge documentation accessible on their official sites, online communities, and blogs.