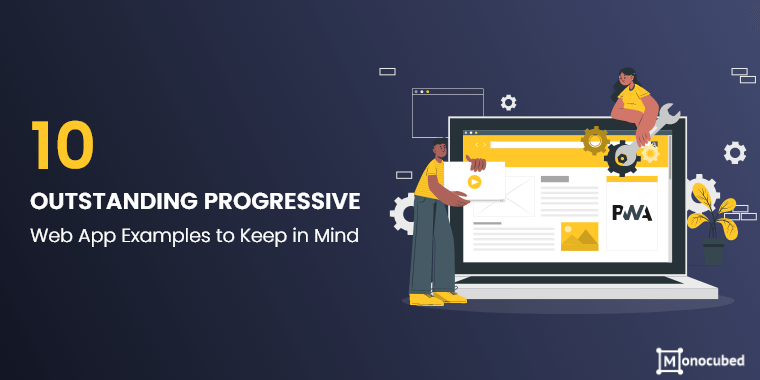 To attain the success and profitability of any online venture, high-performing applications play a significant role. As a result, websites across the industries are exercising an innovative standard known as Progressive Web Apps to enhance their productivity.

Supported by Google, PWA technology has statistically improved conversion rates of a lot of businesses by more than 36%.

Progressives web apps targets at providing a high level of performance irrespective of network condition or device. It is achieved by augmenting PWAs with native app features that are fast, reliable, and engaging.

What are Progressive Web Applications?

A progressive web application(PWA) is a kind of application software conveyed through the web, developed utilizing general technologies including CSS, HTML, and JavaScript. It is envisioned to function on any stage that employs a standards-compliant browser, comprising both mobile and desktop devices.

Whereas web applications have been obtainable for all mobile devices from the beginning, they have usually been very slow, have had fewer traits, and have been less utilized than the native mobile apps.

Since a PWA is a sort of website or webpage, they do not need discrete distribution or bundling.

There is no constraint for users or developers to install PWAs through digital distribution schemes like Google Play or Apple Store. Our custom web application development services include progressive web application solutions for businesses.

Progressive web apps are planned to function on a browser that is compliant with suitable web standards. As with some other cross-platform resolutions, the aim is to assist the developers to develop cross-platform apps more effortlessly.

As of April 2018, PWA characteristics are supported to wavering degrees by Google Chrome, Mozilla Firefox, Microsoft Edge, and Apple Safari browsers, but more browsers may support the characteristics required in the future.

Numerous businesses highlight noteworthy improvements in an extensive range of crucial performance indicators after PWA employment, like more time spent on the page, revenue, or conversions.

PWAs have plenty of crucial features that make them stand apart from traditional web apps:

Thus, PWAs function well with all browsers and are compatible with any device, irrespective of the screen size and other conditions. Mobile and tablet users will have the same experience.You can even use it on desktops if required without any issues.

Let’s validate your idea and convert it into a mobile-friendly progressive web app.

Initially developed by Google in 2015, PWAs have become enormously popular amongst developers and users globally. Here are some of the traits that make PWAs the web apps of the future:

What can Progressive Web Apps do?

Progressive Web Apps (PWA) can schedule to receive content from other apps or to be the default app to manage different kinds of files. When a PWA moves out of any tab into a separate app window, it converts how the users think about it and interacts with it.

Progressive Web Apps are utilized by numerous popular companies. Some of them are Starbucks, Uber, MakeMyTrip, Flipkart, Pinterest, Twitter Lite, and Forbes. These sites have received improvements in re-engagement, augmentation in speed, and increment in conversions after the adoption of PWA.

Progressive Web App is the best mode for developers to make web app load faster. PWA is a web application that can work offline when there is no internet connection at all, leveraging the data cached through your last interactions with the app.

There are several such PWA examples for various brands across the industries that have shown eccentric results. It functions well for every user, irrespective of browser selection, by employing progressive enhancement ideologies.

Its service workers permit the usage on low-quality networks and on offline mode too.

All the above-mentioned examples of the best web apps exhibit that PWAs may become a great choice to improve the digital web presence of your company, delivering custom web solutions with an app-like user experience, rapid loading, lower data usage, and no downloads.

If you want to employ the advantages of Progressive Web App technology for your business, Monocubed is here to assist you.