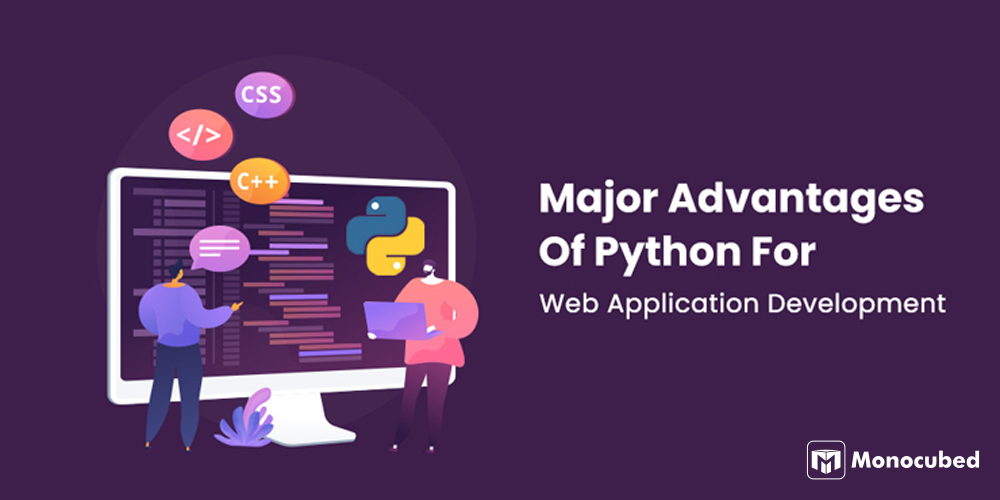 Python is one of the most loved programming languages for web app development. It offers many advantages, with simplicity and flexibility being the main reason for Python’s rise in popularity.

Being a leading Python development company in USA, we often get such questions from our clients. We have written this article for to answer these common Python questions.

In this blog, we are going to discuss the advantages of Python programming language for your web development project. We will go through some of the Python disadvantages as well.

But first, let’s have a brief look at what Python is.

Python – At A Glance

Python is a highly intuitive object-oriented programming language. It is a general-purpose language that is used for a variety of objectives, such as software development, web scripting, and Machine learning apps.

Python was founded in 1991 by Guido Van Rossum. It is one of the most popular programming languages today, according to the Tiobe Index of June 2021. It is clear from the statistics that Python’s popularity is ever-rising.

Python is also the top choice in academic learning as it is written in the English language. It is easy to learn and provides clean readable syntax. You are also able to meet the requirements of data science applications.

There are many advantages of using Python as a web scripting language. It is a preferred choice for a lot of businesses and there are many reasons for the same.

Flexibility, readability, scalability, portability and speed are some benefits of Python. It is also one of the only programming languages that support math-intensive applications.

So what are the advantages of Python? Why should you use Python for web app development?

Although there are many Python advantages, there are also a few disadvantages that can hinder your development. It is important to have an understanding of the limitations and plan your project accordingly. Some of the disadvantages of using Python language are-

These were the advantages and disadvantages of Python development. Now let’s look at how useful Python is, specifically in the field of web app development.

Python programming language is general-purpose and has various fields of application. Some popular apps built with Python are- Instagram, Spotify, and Pinterest.

So what is Python good for? Some implementations of this popular programming language are-

Machine Learning is one of the hottest trends in software development today. Implementing ML in your application, your Python program can intelligently consume unstructured data and make calculations and predictions. This means your application, without being explicitly coded, will perform tasks automatically for you.

Simply put, this enables you to develop applications that include features such as handwriting recognition, data mining, facial recognition and device tracking.

Data extraction and analysis are the most important part of any business. Python provides libraries and tools for scraping through user’s likes, dislikes and preferences. There are also statistical and graphical tools that help you visualize and analyze the data to make profits.

Prototype creation works very well with Python. Programmers build an application prototype to showcase its core functionalities to clients instead of coding the whole app. Refactoring the prototype code to build the application is fairly simple in Python.

Web scraping extracting voluminous amounts of data from different web pages over the internet. The extracted data is generally used for the analysis and prediction of different real-world processes.

Python is also used for scientific research and computing. There are several Python libraries such as AstroPY, BioPython, Graph-tool, and PsychoPP that can be used for the implementation of computational biology, astrophysics, natural language processing, or data visualization.

AI is a field involving massive research. Libraries, visual tools, simplicity, and consistency are some benefits of Python over other languages.

You can integrate your project with chatbots, biometrics security, personalized recommendations and even a voice agent like Siri or Alexa using Python libraries.

Python is the number one skill required for data scientists. Data processing and analysis is a broad field requiring handling large data sets. Owing to the integration merits of Python, you can work with already existing databases.

The financial industry uses Python on almost every front. Along with FinTech companies, other enterprises also prefer Python. You can design business apps that integrate with existing systems like databases and other websites or non-web apps.

The scalability of Python allows it to be the perfect choice for startups and small companies. High scalability, quick prototypes, the rapid development of Minimum Viable Products(MVP), and cost-efficiency are Python advantages that make it a preferred choice.

What is Python used for?

Python is a general-purpose programming language having implementations in a vast array of fields. It is used as a scripting language for web browsers. It is also used for software development, web browser scripting, desktop applications, image processing, and more.

Python has been the most loved programming language by web developers. Its simplicity, ease of usage, flexibility and well-structured syntax, make the language a top choice for companies. The Python source code is readable and manageable and it is very easy to learn and use as opposed to some other programming languages such as Java or Ruby.

Is Python used for Artificial Intelligence?

Python programming language is an ideal choice for Artificial Intelligence and Machine Learning. It comes pre-installed with libraries such as Pandas, and SciPy that include pre-written components. It is flexible, follows object-oriented programming approach, has readable keywords and can be easily integrated with other languages.

There are many advantages of the Python programming language for up-and-coming businesses. Along with simplicity, code readability and flexibility, it also provides scalability, interoperability and backward compatibility.

Python advantages are numerous. It is after careful consideration of your project requirements, that you should govern if it is indeed the right fit. Most projects thrive with Python usage.

So, if you have a web project in mind, Monocubed can assist you in exploring and bringing it to realization. Get in touch with us anytime and our consultants will help you with Python development.