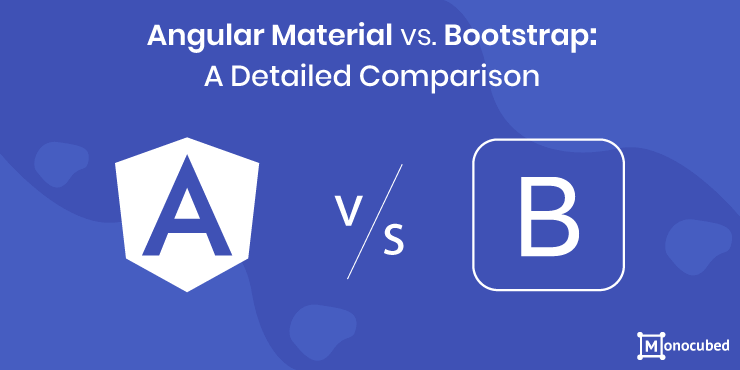 Do you want to attain higher engagement and brand loyalty for your business in this tech era?

Your business can be thriving if you provide a rich user experience. For this, you can create a powerful web interface, with some of the best front-end application development tools.

There are numerous CSS and UI frameworks that claim to be functional and responsive. So, with this blog, we would like to answer one of the most prevalent confusions of all time, Angular vs Bootstrap, which one is better for development.

We provide a detailed guide to help you choose between Bootstrap or Angular Material as your frontend library.

It is written in TypeScript language. It enforces optional and core functionality as the set of TypeScript libraries that you can import into your web apps.

An Angular web application has an architecture that relies on specific fundamental concepts. The most standard building blocks are ng-modules, which offer a collection of contexts for the angular components library.

These modules gather the related code into functional sets and thus an Angular app is mainly defined by a set of such ng modules. Components describe views, which are a collection of screen elements, from which Angular can opt and alter according to the program data and logic.

What is Angular Material?

The extensive utilization of component-based frameworks such as React, Angular, and Vue.js, has witnessed a rising amount of prebuilt user interface component collections.

Such collections can facilitate a web developer to swiftly create proficient and responsive design frameworks and applications.

Before getting onto what is Angularjs Material, let us know about Material Design.

In 2014, a design language invented by Google, Materials was introduced. To aid you in motion, visual, and interactive base design, use Material Design as your vigorous tool.

This documentation helps you adapt to different devices and screen sizes. Initially, it was affixed to Angular JS to create such apps more striking and function faster.

Then Google removed JavaScript and named it Angular in 2016 by rewriting its code from scratch. Finally, Google affixed Material Design to Angular that uses TypeScript and termed it as Angular Material.

The UX/UX components in Angular are called Angular Materials. It is the functioning of Material Design guidelines and principles for Angular.

A UI component library is usually a store where all of the web components stay together. It consists of a range of UI angular material components listed below:

Below are a few significant features of Angular Material:

Unlike Bootstrap, Angular Material is specifically designed for the JavaScript frontend framework – Angularjs. Some features that make Material stand out are –

Angularjs Material classes are built in such a way that the site can fit aptly to any screen size. It has an inbuilt responsive pattern so that the site formed utilizing Material will restructure itself as per the size of the device.

Angular material framework is formed considering the fact that it is easier to add novel CSS rules than to overwrite the current CSS rules.

It is by design very flat and minimal. The shades and colours remain unchanging across several devices and platforms. It supports bold colours and shadows.

The library is easily extendible for implementing any new feature or element you would like to customize.

Simple. Talk to us and develop a rich, attractive UI-UX design that grabs your user’s attention. Let’s start designing.

Bootstrap is an open-source and intuitive CSS framework, which is used primarily for mobile-first front-end website development.

It was discovered by Mark Otto and Jacob Thornton at Twitter, and it was formerly named ‘Twitter Blueprint’.

CSS is principally used, but HTML templates are also a part of it. Besides HTML and CSS templates, it also depends closely on JavaScript components, mostly in the type of jQuery plugins.

Bootstrap also has widespread support and vast coding documentation with extensive online resources and assistance from the community of developers. This, in turn, makes it easier to understand this framework better and how to employ it.

The main purpose of Bootstrap design is to facilitate and simplify the problem of web pages and web applications development, by supplying abundant options and components that can be carried out and customized.

Bootstrap includes an array of design templates. These templates are focused on and work with the following:

The components that are pre-styled in Bootstrap:

Bootstrap contains a lot of appealing features. The following features make it more accepted among the web designers community:

Bootstrap offers LESS files and also covers the old CSS files. It is extremely easy to begin with, even for novice developers and non-technical personnel.

Considering the information that Bootstrap is designed in reactive 12-column layouts, grid system, and components, it is also easier to customize.

Whether you want a definite or responsive, it can be attained by implementing some changes. Nesting and offsetting of columns are easy to perform in both, CPU and mobile browser compatibility grids.

An additional important feature is its receptive utility classes. Deploying these classes, a particular portion of content can be formed to emerge or conceal only on devices relying on the size of the screen being utilized. This makes it enormously conducive for designers who want to craft a tablet and mobile-friendly version of the portfolio websites.

This is one of the most receptive features and to add it to the website, numerous dissimilar plugins, mainly Java-based, are tested. But with Bootstrap and its simple customizing option, it can easily be done in a few minutes.

Developers focus on creating websites that have a robust structure and functionality. They tend to choose the framework that is best suited for rendering impeccable solutions and supreme user experience. Bootstrap and Material design are two such exceptional UI libraries that are being extensively used for developing attention-grabbing frontends.

Comparing bootstrap vs angular material is meant to assist you in deciding whether to go with bootstrap or material design for your web application.

Looking for a Frontend Developer?

Hire one of our front-end developers who will help you develop a one-of-a-kind UI using Angular Material and BootStrap.

Angular Material or Bootstrap – Which is Better?

There are many points of difference between Angular Material and Bootstrap with each having reusable components, customizable themes and support for responsive UI designs.

From the above comparison of Bootstrap vs Material, Bootstrap is clearly more popular. But material design with Angular has some benefits as it is an Angular.js UI framework.

It has complete Material Design support and has a mobile-first framework that functions well with a desktop. Angularjs Material also consists of adaptive layout directives and a flexbox grid system.

But although Angular.js Material is one of the best Bootstrap alternatives, it still falls short in some cases. From the above comparison of Bootstrap vs Material, Bootstrap is clearly more popular.

The Bootstrap framework has complete Angular support and a strong web developers community. But in addition, it also supports other frontend frameworks.

With the latest Bootstrap 5 Alpha, it has improved API and enhanced grid systems. Companies using Bootstrap design framework are Udemy, Twitter, StackShare, Spotify, and LinkedIn, to name a few.

When to use Angular Material?

When to use Bootstrap?

You can also use Material and Bootstrap together in a project. But you have to be careful in implementation or it can lead to contradictory elements. “mdbootstrap” is a library that lets you implement Angular Material CSS designs along with implementations in HTML and jQuery.

Can I use Bootstrap with Material?

If you want to use Angular Material with Bootstrap, you will retain: Both possess CSS which targets your front-end elements – buttons, input elements. These two technologies have their unique feel which means your project will not have one single look. On adopting both these technologies, you need to look at the CSS styles that must not override others on common portions, for example, font family and font size.

We use Bootstrap because it is easy to use. Anyone who has a basic understanding of CSS and HTML can start using them. Its receptive CSS amends to tablets, phones, and desktops. In Bootstrap 3, mobile-first designs are a portion of the core framework. It is compatible with all contemporary browsers, namely, Firefox, Chrome, Edge, Safari, Internet Explorer.

How to customize Bootstrap?

Angular Flex-Layout can provide a robust grid system which depends on CSS flex. The charm of this layout relies on how you describe the layout regions in association with each other. Angular Material and Flex Layout are absolutely better than bootstrap. But that doesn’t mean that you should not use bootstrap, but you may consider utilizing both the libraries.

With the expanding technologies and frameworks, we see websites that are spectacular visually, and that function perfectly. The objective of Material Design is to unite the user experience on mobile, web, and tablet instruments.

In fact, Material Design for Angular is developed with the aid of AngularJS, Polymer, and Ionic. Whereas, Bootstrap is a structure where information is presented and organized.

We place a great emphasis on the word ‘information’ because apps like Twitter, Coursera, Apple music were built with soft colours, minimalistic patterns, bold and huge headlines, a minute or no animation.

Contact our experts for more details on Material Angularjs and Bootstrap.