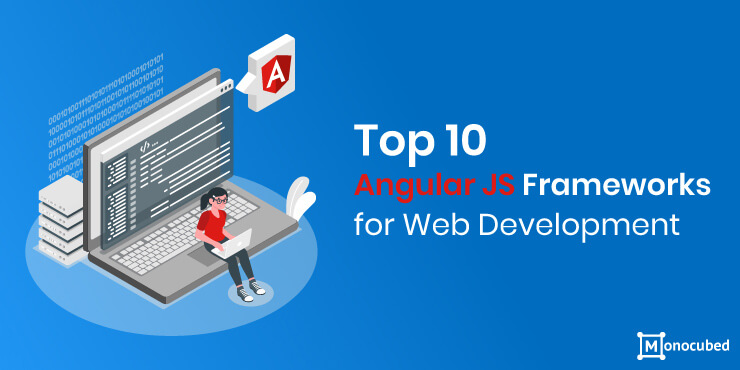 When it comes to developing websites and web apps, the most important thing nowadays is to grab your user’s attention. No matter how good your content is, without attractive designs or unique graphics, you will not be able to get users interested in your website.

Without any surprise, there are many AngularJS frameworks that support and simplify Angular development. In this blog, we look at the 8 best Angular JS frameworks for building dynamic web applications.

AngularJS Framework- At a Glance

AngularJS is an open-source, frontend framework.  It is a JavaScript framework primarily maintained by Google and by a community of corporations and individuals to solve challenges faced in building single-page applications.

It focuses on streamlining both testing and development of web applications. Angular’s Model-View-View Model (MVVM) architecture is popular for being efficient, and time-saving.

Angular allows you to use HTML as your template programming language and expand HTML syntax to express your app components.

AngularJS dependency injection and data binding eradicate much of the codes that you would have to transcribe.  And it all occurs inside the browser, forming it an ultimate partner with any server technology.

Angular JS is perhaps one of the most popular web frameworks accessible today. This is the framework that is used majorly for building Single page applications.

Because of Google’s support and ideas emerging from an extensive community forum, it is always kept updated. Additionally, it always integrates the modern development trends available in the market.

AngularJS has the following crucial features which make it one of the most influential frameworks.

Directives are the markers on DOM components such as attributes, elements, and CSS.  These can be utilized to form customized HTML tags that assist as novel custom widgets.  AngularJS has inbuilt directives such as ngModel and ngBind.

You do not have to write different codes to bind the data to the HTML controls.  This can be made by adding some snippets of the code.

It allows us to encrypt the state of the app in the URL so that it can be easily bookmarked.  Then the app can be restored from the URL to an identical state.

MVW is a pattern for separating an app into diverse parts called model, view, and controller, each with different responsibilities.  This framework does not devise MVC in a traditional way, but rather somewhat nearer to MVVM.  AngularJS team refers to it amusingly as Model View Whatever.’

Controllers are JavaScript functions that are bound to a specific scope.

Scope defines the objects that mention the model.  They perform as an adhesive between view and controller.

Templates are the condensed view with data from the model and controller.  These can be in the form of a single file like index.html or manifold views on one page utilizing partials.

AngularJS has an inbuilt dependency sub-system that aids an Angular.js developer to understand, create, and test web apps more easily.

With AngularJS, it is much easier to develop robust and modern web applications. To streamline the tasks and upsurge efficiency, there are various frontend frameworks for AngularJS.

These frameworks offer numerous inbuilt web components and by exercising them along with AngularJS, developers can rapidly build an application from the scratch in much lesser time. There are several such frameworks and choosing one for your project can be quite perplexing.

Below is the list of some popular AngularJS Frameworks that you can employ.

Which framework does AngularJS use?

AngularJS allows you to extend HTML vocabulary for your web application. To download AngularJS, we need the tools that are required to set up a development environment for AngularJS. They are AngularJS library, editor/IDE, browser, and web server.

What is Angular JS used for?

There are many sites that are employing Angular JS for a user-friendly web app development. AngularJS would aid you in building robust web applications with a premium user experience if you are looking to develop weather application, user-review application, eCommerce platforms, travel app, social app, video-streaming app, and user-generated content portals.

Diverse web app development is possible with ingenious frameworks and skilled developers. AngularJS frameworks are versatile in their usage and can build a rich user experience for web applications using Angular components.

Every framework in this Angularjs framework list is specifically made for streamlining a particular aspect of Angular web development. Depending on your project requirements, you can use one or more of the frameworks in the list.

Confused about what your project requires?

Contact Monocubed to book a free consultation with our experts who will analyze your project and list out the best possible technologies and frameworks for it.

If you have a web app idea in mind, we provide custom web development services ranging from custom web applications, eCommerce websites to enterprise solutions and CMS development.