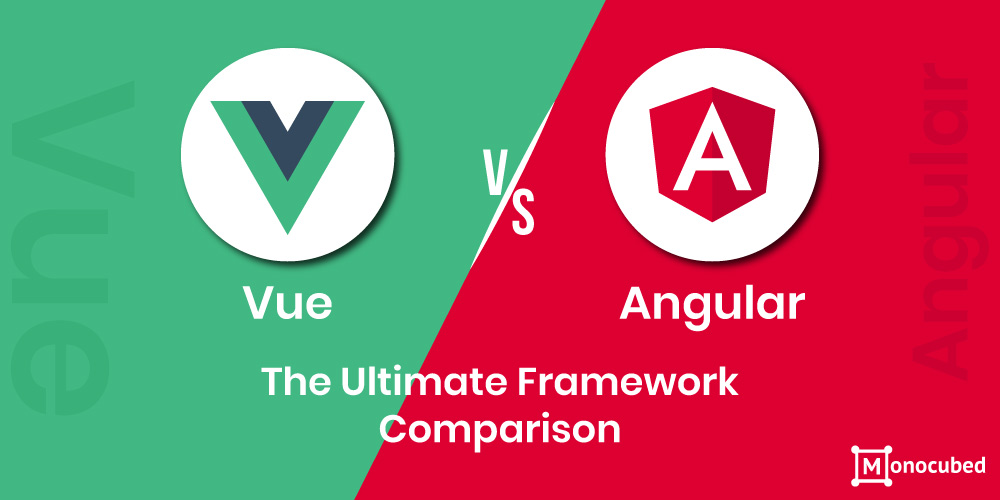 Although numerous JavaScript frameworks have been released in the past, nothing has come close to the holy trinity- Angular, React, and Vue. We have already done an in-depth comparison of Vue Vs React, and Angular Vs React.

In this blog, we do a detailed analysis on Vue js Vs Angular to find which one is the better framework for you.

Angular.js and Vue.js are both JavaScript frameworks used for the front-end development of web interfaces. While Angular is a TypeScript structured framework, Vue is a more progressive lightweight framework.

So, let’s make this choice easier for you and have a good old Vue Vs Angular showdown. First, let’s understand the basics of both web frameworks.

What is Angular all About?

Angular is a JavaScript front-end framework, first released in 2010 as AngularJS. Developed by Google, it underwent significant changes in 2016 when the second version was released. Due to a lot of confusion, Angular 2 was later renamed Angular and became a separate entity from AngularJS.

Angular.js is a very famous framework and has a set of very dedicated followers. It has excellent features like MVC framework, HTML templates, and components, such as MongoDB, Node.JS, and Express.JS, that have kept Angular at the top for years.

There is no doubt that Angular is a complete frontend development framework, perfect for developing a web application.

What is Vue js Used For?

Vue.js is a faster, simpler, and sleeker child of the React and Angular JS frameworks. Developed by Evan You in 2014, it has amassed a massive following in a very short time for its lightweight, progressive web development framework.

It is worth noting that Vue doesn’t have the backing of huge companies like Google (Angular) and Facebook (React). It functions entirely through the open-source developing community.

The main reason for Vue’s immense popularity is that it brings together the best of Angular and React. Evan You, who had closely worked on Angular when he was with Google, has figured out a full-proof formula for a successful frontend Javascript framework.

Learning from the ups and downs of Angular and React, Vue ensures to repeat no mistakes. It solely focuses on the View layer, that is, building user interfaces.

Vue Vs Angular – 8 Key Differences To Focus on

Vue is considered to be a child of the Angular and React JavaScript frameworks. So, it is obvious that there would be numerous similarities between all three frameworks. But there is enough difference between Vue and Angular to warrant different uses for the frontend frameworks.

Let’s look at some of the most defining differences between Angular and Vue that might help you in deciding which framework to use.

Have a Unique Web App Idea?

The difference between Angular and Vue is very definite. Both have been built for completely different purposes. Lets look at the advantages of both the JavaScript frameworks before we decide which is better.

Angular is the most mature Javascript framework, getting periodic updates every six months. It has good backing from Google and provides a complete web app development package.

Vue.js is the most rapidly growing Javascript framework, considering it is fully functioning in the open-source community without any relevant backing.

The Vue.js inherits most of the good things from both React, and Angular and hence some techies consider it an unofficial child of Angular and React.

Angular vs Vue – Which is Better?

Both Angular and Vue have their pros and cons. Which is better is a question that depends entirely on the project and other variable conditions.

When to Use Vue?

Although Vue is a recent addition to the race of JavaScript frameworks, it is hard to dismiss it. Gaining popularity rapidly, Vue is becoming a leading choice for a lot of front-end developers. It is fast, sleek, incredibly flexible, lightweight, and allows easy integration of external features.

We recommend opting for Vue as your frontend framework if –

Vue is a good framework to use for projects that require flexibility. Due to the use of Virtual DOMS, even though projects undergo changes at various stages, the framework’s performance is not compromised.

An SPA is a web page that rewrites data for a user from web servers. It does not require reloading entire web pages every time. Since Vue allows changes to be made rapidly, it works exceptionally well with single-page applications.

As discussed, out of Angular, Vue and React, the smallest and simplest front-end framework is Vue.js. It does not require a lot of space, the codes are compact, and most of its functionality comes from third-party solutions.

If we compare the learning curve for Angular, React, and Vue frameworks, it is the smoothest for Vue. This is because it doesn’t require knowledge of any programming language except Javascript for front-end development.

Grammarly, a grammar editing tool that scans your text for spelling errors, punctuations, and other syntactic and grammatical errors, uses Vue. Used as a browser extension, mobile keyboard, and web app, Grammarly has a simple, functional design.

9Gag, a social media platform hosting millions of users, also uses Vue for its front-end development needs. The site is a photo-based forum, sharing viral memes, videos, and news. It is a clean, sleek website and very convenient to use.

Confused where to start? Don’t know how much it will cost? Wondering which platform to use for developing the website? We’ve got you covered. Let’s talk.

When to Use Angular?

Angular is used for creating massive, complex web and desktop apps that support thousands of users. Even after years since its release, Angular remains strong because of its extensive libraries, reusable templates, mobile-friendly features, and ease of use.

We suggest using Angular when –

Because of its MVC framework, Angular.js can divide large amounts of code into components. Thus, developing and managing apps with complex architecture is easier with Angular. Plus, unlike Vue, you can reuse a lot of code, which helps in cutting down developing time.

If you prefer to work with object-oriented programming concepts, the Angular framework is the best option. Angular.js shares a lot of concepts with OOPs, and you will love the default structures that Angular uses.

Angular.js is a very mobile-friendly framework. If you want to design an app that works across various platforms, be it a desktop app or a mobile app, Angular is your guy. Angular apps been able to eradicate a lot of problems like small screens and touch navigation in mobiles.

Working with Angular is complex and requires years of experience. When working with large teams made up of experienced developers, prefer using the Angular.js framework, as it allows easy flow of data and provides a structured architecture.

Gmail, the most used email servicing app, has been developed using Angular. It is simple, functional, and extremely comfortable to use.

Apart from Gmail, a number of other Google products and websites like Google.org, Google Play Store, and the Gsuite homepage use Angular as their trusted front-end development tool.

Forbes, the most trusted news source in the world, uses Angular to keep us up to date with world events. The website is comfortable to navigate, simple but impactful in its design.

Certainly not. Although Angular’s popularity has decreased in recent times, it still has many followers. Angular.js is a great option for building a large-scale web app. It has never compromised the performance of a web application. Plus, it focuses on all aspects of web development, not just the frontend. It is a complete package.

Is Vue.js easier than Angular.js?

Yes. In terms of learning, Vue is easier to grasp as it doesn’t require learning new concepts and languages. Unlike Angular, whose documentation also requires knowledge of Typescript, Vue just requires knowing Javascript. Vue’s documentation is easy to understand, and if you already know Javascript, you can start using Vue in a day.

Does Google use Angular?

Since Angular.js is backed by Google, it is obvious that Google uses it extensively in their products. Be it Gmail, Google Voice, Messages, or other internal websites and applications, Angular is being used thoroughly by Google.

Angular vs Vue vs React?

Looking at Angular vs Vue, it is hard to discard any of the two frameworks saying it is not good. The fact is both Angular and Vue are excellent frontend development frameworks. It is more about finding the right fit for your project.

If you take up Angular for small-scale projects that require efficiency, it will make your life hard.

But if you choose Vue for large applications that work across many platforms, you will end up doing redundant work. Both the frameworks have their own sets of pros and cons.

At Monocubed, we can help you choose the framework that suits your needs. We have an expert team to guide you throughout your development process. Contact us for any development-related queries.

Don’t forget to check out our other framework comparison of React Vs Vue and React Vs Angular. Do drop in your responses in the comment section and let us know your favorite framework to work with.